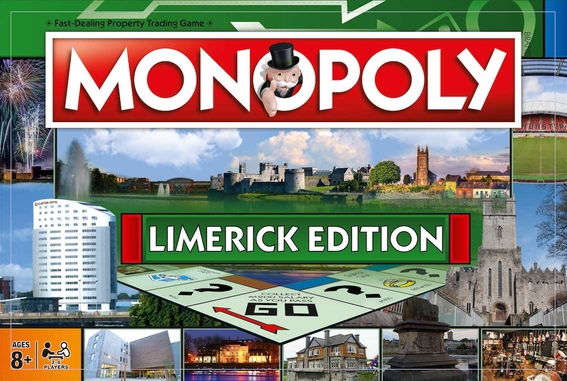 Red carpet being rolled out for Limerick MONOPOLY board launch

The Limerick MONOPOLY board launch is just a roll of the dice away.

The Limerick MONOPOLY board launch takes place on Friday, October 28th at 10am in the Hunt Museum. MONOPOLY is one of the world’s most popular family board games to date and will no doubt be a huge hit amongst both young and old here in Limerick.

It houses some of the world’s finest art exhibits, many of which are reputed to be priceless – but shortly The Hunt Museum, complete with its celebrated Picasso and other masterpieces, goes up for sale, for peanuts!

The world-renowned Museum is up for grabs on the fifth least expensive square on a brand new official Limerick MONOPOLY board alongside (just a tad more expensive, if you can stump up the MONOPOLY money!) Limerick Milk Market, Limerick Races, Munster Rugby and King John’s Castle.

In all 22 Limerick landmarks are all up for sale on their very own MONOPOLY multi-coloured prime real estate on the new board which out within the next fortnight.

The game features the “great and good” of Limerick, says Patrick O’Neill, who was appointed earlier in the year by WINNING MOVES as a Special Advisor to the board. Mr O’Neill, who lives in Limerick, will be at the launch event. He adds: “While Limerick didn’t win the European City of Culture 2020 when an announcement was made in the summer, here is something very quickly to cheer everyone up – a universal board game we all have played. “Limerick people here and abroad – and the millions who visit the region – will be absolutely thrilled to be able to open and play the board over Christmas.”

To read more about the Limerick Edition of MONOPOLY, click here.