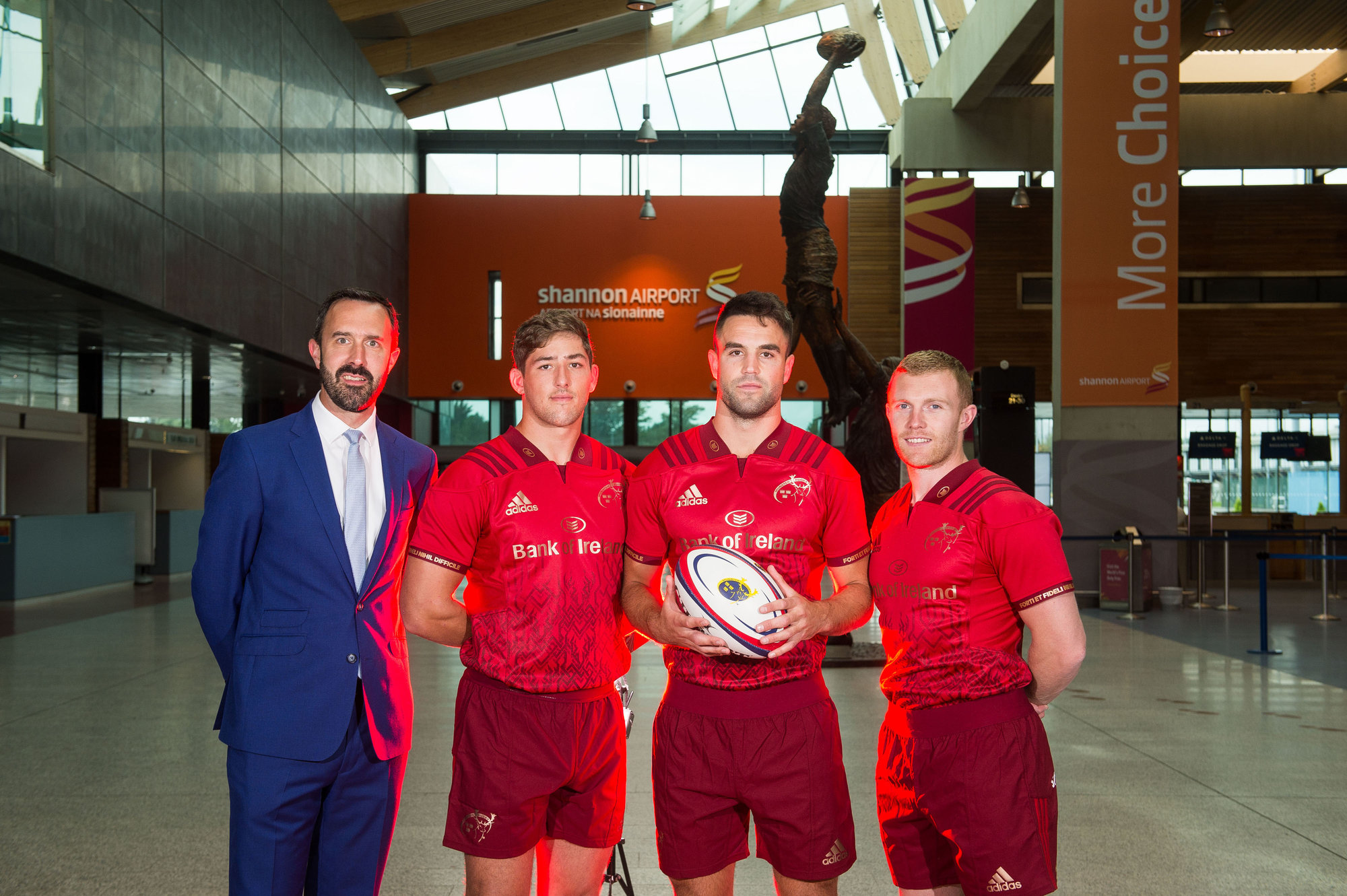 Shannon Airport is delighted to announce that it has come on board as Munster Rugby’s ‘Official Airport Partner’ in a three-year commitment.

The partnership is a timely boost for the commencement of the 2017-18 season and formalises a long-standing relationship between the province and Shannon, with the airport having hosted some unforgettable and emotional Munster homecomings over the years, not least following the 2006 and 2008 European Champions Cup Victories.

The Munster Rugby Shannon Airport Partnership, which makes Shannon the exclusive airport partner to Munster rugby, will see the Shannon logo positioned on the players’ shorts.

Announcing the deal, Shannon Airport Managing Director Andrew Murphy said that it’s a natural fit for both airport and province.  “Shannon Airport is synonymous with some of the great Munster Rugby homecomings.  We’ve had thousands of Munster fans packed in here for Munster homecomings over the years.  The most notable events were, naturally, the ’06 and ’08 homecomings following the European Champions Cup victories in Cardiff.
“The great thing about Munster also is that we have had big numbers here for homecomings after quarter-finals and semi-

The partnership is a timely boost for the commencement of the 2017-18 season and formalises a long-standing relationship between the province and Shannon, with the airport having hosted some unforgettable and emotional Munster homecomings over the years. Photo: Diarmuid Greene/True Media.

finals and, indeed, also when the team did not get across the line. It’s just a brilliantly supported team, in good times and bad.  This is a perfect partnership for Shannon.  Munster is a massive rugby community. Shannon is also very much a community and over the years, this has been the preferred airport of Munster players and fans alike so it’s only right that we would formalise the relationship.”

Munster Rugby Commercial Manager Doug Howlett said, “Munster Rugby are delighted to announce Shannon Airport as our exclusive airport partner. We have a rich and colourful history together and we remain very much aligned through serving our community and striving for excellence. Munster Rugby are excited to formalise this relationship and for Shannon Airport to remain the launch pad for our rugby adventures into the future. As the season kicks off this Friday we look forward to supporting the team and our latest Partner Shannon Airport”

Shannon Group CEO Matthew Thomas said:  “ From a Shannon Group perspective, we are delighted that Shannon Airport and Munster have formalised their long standing relationship and we look forward to the province picking up where it left off last season and continuing its progress back up the European ladder.”

To find out more about Munster Rugby click here

To read more of our stories on Shannon Airport click here