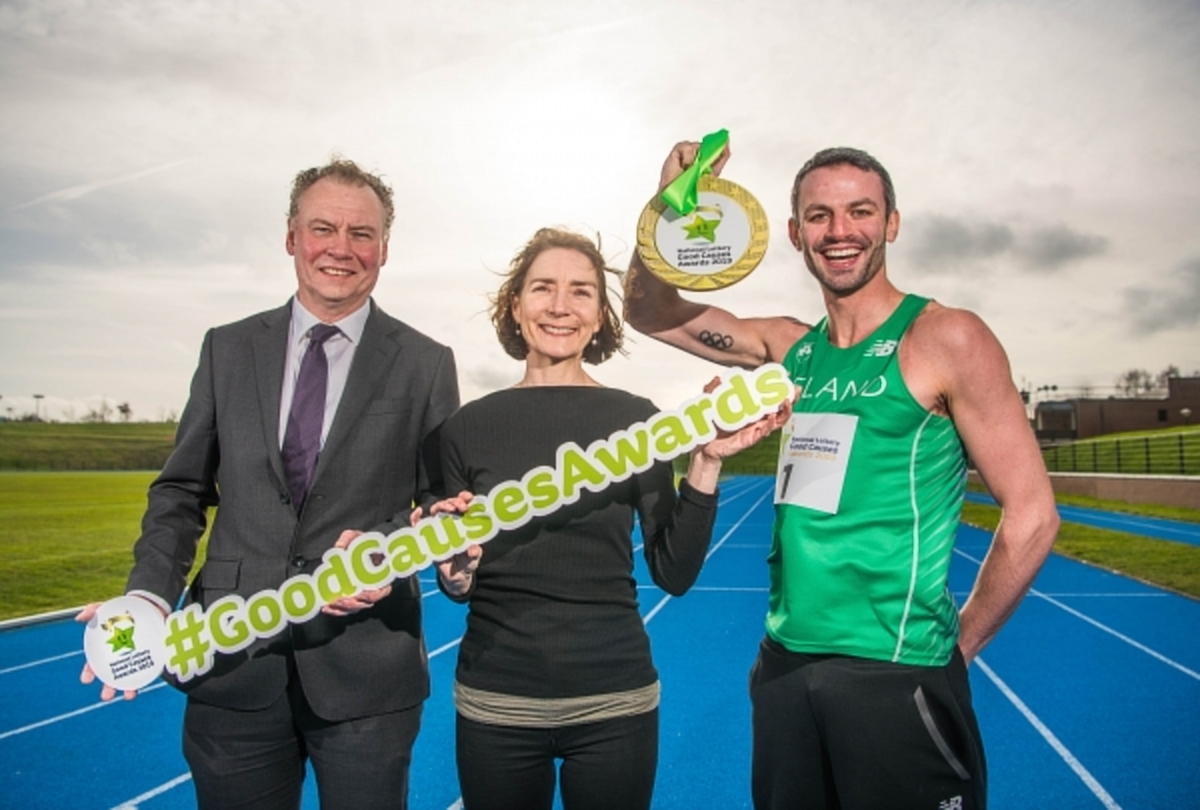 Pictured at the University of Limerick for the launch of the National Lottery Good Causes Awards 2019 are Olympic hurdler Thomas Barr, Theresa Kavanagh of the Children’s Grief Centre (which was awarded Overall Good Cause winner in 2018), and National Lottery CEO Dermot Griffin. Picture: Diarmuid Greene

Irish Olympian hurdler Thomas Barr launched the National Lottery Good Causes Awards 2019 which honor the inspiring work and achievements of thousands of projects, clubs, and individuals all over Ireland.

The major awards initiative, now in its second year, is open to organisations making an incredible difference in their communities with the help of National Lottery Good Causes funding. The televised awards carry a prize fund of €95,000.

Pictured at the University of Limerick for the launch of the National Lottery Good Causes Awards 2019 is Olympic hurdler Thomas Barr.
Picture: Diarmuid Greene

He added: “Irish sportsmen and women need to be funded in order to reach their full potential and the contribution of National Lottery Good Causes grants to sporting organisations, in particular, has been immense. And it’s not just elite athletes who benefit as this funding has made a huge difference to thousands of sports clubs up and down the country. The variety and breadth of National Lottery support is impressive with the arts, culture, youth and the Irish language also benefitting.”

Current European Championships bronze medallist in the 400-metre hurdles, Barr represented Ireland in the 2016 Rio Olympics where he narrowly missed out on a medal. He holds the Irish National record for the 400m hurdles and was part of the 4 x 400m relay team that holds the current Irish record. He now has his eyes set firmly on the Tokyo 2020 Olympics next year.

National Lottery CEO, Dermot Griffin, said it is fitting that the profound impact of Good Causes on villages, parishes, towns and cities all over Ireland, is honored.

“The National Lottery is used to celebrating winners. However, we have thousands of winners, unsung heroes, who work quietly under the radar to make positive change in their communities and these Awards reflect that dedication and commitment.

He added: “Through the Good Causes Awards we want to show how ordinary, everyday people, organisations, projects and sports clubs are doing extraordinary things in their communities. This is work that often goes unrecognised, and we are encouraging Good Cause beneficiaries to enter these awards to give them the opportunity to have their hard work honoured.”

Individuals, community projects and organisations who received Good Causes funding in the years 2016 and 2017 are eligible to apply. Applications for the Awards are now open, and people can enter and check eligibility at www.lottery.ie/goodcausesawards.

The Awards will have seven categories, with County and Regional finals leading up to the Gala Awards Dinner on Saturday 2nd November in the Clayton Hotel, Ballsbridge in Dublin.

The seven categories are:

An individual or member of a community or youth project, charity, sports club, arts or heritage organisation which has received National Lottery Good Causes funding between the years 2016-2017. Beneficiaries will be judged on how their funds were used to have the most impact on their local community, members or service users.

Entries are made online. More information and full competition rules at www.lottery.ie/goodcausesawards.