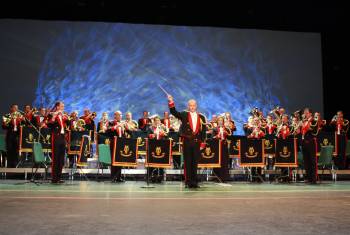 University Concert Hall is delighted to present A Nation’s Song 1916 to 2016 on Saturday May 21 at 8pm, to commemorate the Centenary of the 1916 Rising. This Gala concert will feature the Military and Pipe Bands of the Defence Forces, under Lieutenant Colonel Mark Armstrong, together with special guests Owen Gilhooly, Mairéad Buicke, Pádraic Keane and the Irish World Academy Choir.

Some of the country’s most well-loved songs and tunes will be beautifully presented by this combination of national and local talent. The Irish Army March, The Boys of Wexford, Finnegan’s Wake and Limerick’s Lament are just some of the pieces to be performed by the Military and Pipe Bands of the Defence Forces. Mairead, Owen and the Irish World Academy Choir will join them for favourites such as I Dreamt I Dwelt In Marble Halls, Danny Boy, Macushla and You Are the New Day, with everyone coming together for a rousing finale. A Nation’s Song 1916 to 2016 will celebrate Limerick’s part in the 1916 Rising by showcasing some of the city’s greatest musical talent, performing works from throughout our nation’s history.

The Defence Forces School of Music was established in 1923 with four military bands being formed during the early years of the Irish state. Defence Forces Bands continue to perform at all major military and state ceremonial occasions including all Presidential Inaugurations from that of the first president of Ireland, Douglas Hyde to the present day. The band performing for A Nation’s Song 1916 to 2016 is a composite band drawn from the three bands of today’s Defence Forces – Band 1 Brigade (Cork), Band 2 Brigade (Athlone) and the Army No.1 Band (Dublin).

Defence Forces Pipe bands also play an important part in many ceremonial and sporting occasions and are probably best known from their performances during the Dublin Horse Show in August of each year.

Conductor of the band of the Defence Forces Training Centre since 1990, Lt Colonel Armstrong has also appeared as conductor with Ireland’s principal musical ensembles, choirs and orchestras. He has produced many arrangements for concert band, adjudicated at choral and band competitions throughout Ireland and has accompanied military bands and musical groups abroad – twice to Lebanon and most recently to the UK, Germany, Belgium and Italy.

Owen Gilhooly made his Royal Opera House debut singing Faure Requiem for the Royal Ballet and has appeared in principal roles with Opera Ireland, Wexford Festival Opera and Scottish. In concert he has appeared with the RTÉ NSO, the Tokyo Symphony Orchestra, the London Philharmonic Orchestra as well as the BBC Symphony Orchestra. In 2014 he made his debut for the Royal Opera, Covent Garden singing the role of Robert in the world premiere of Luke Bedford’s ‘Through his Teeth’. Mairéad Buicke was born in Limerick and graduated with first class honours from the Royal Irish Academy of Music where she studied with Dr. Veronica Dunne. Concert engagements have included those with the RTE National Symphony Orchestra, the Orchestra of St Cecilia, the London Royal Philharmonic Orchestra and her debut in a series of Viennese Concerts for English Northern Philharmonia.