By Richard Lynch on December 11, 2019@richanthon 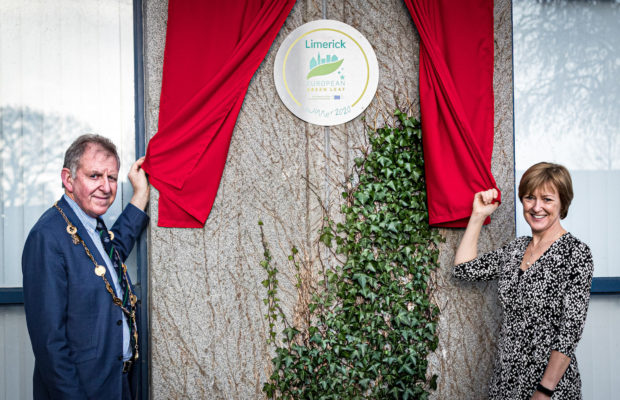 A special plaque has been unveiled at a new ‘living wall’ outside Limerick City and County Council on Merchant’s Quay as Limerick gets ready to become a European Green Leaf city for 2020.

Limerick was chosen for the European Green Leaf City award – an EU designation – last June. The award goes to towns and cities with between 20,000 and 100,000 inhabitants that demonstrate a good environmental record and commitment to generating green growth, develops citizens’ environmental awareness and involvement and that have the capacity to act as a ‘green ambassador’ and encourage other cities to progress towards better sustainability outcomes.

The award for 2020 went jointly to Limerick and Mechelen in Belgium. Limerick turned the heads of judges because of its ongoing commitment to monitor air quality and improve noise levels in the city and transform itself into Ireland’s first digital city by integrating several public services, creating smart neighborhoods and energy districts.

It is also being announced today that Limerick will host Ireland’s first international pollinator conference in May 2020 as part of its European Green Leaf city program. The conference, the first international pollinator event to be held in Ireland, will attract delegates and speakers from countries across the world and is being run in association with the National Biodiversity Data Centre.

Mayor Sheahan said, “Being selected as one of two European Green Leaf cities is a huge badge of honour for Limerick. But we’re acutely aware that this European Green Leaf city designation is really all about green shoots and a year of beginnings for Limerick about where we want to be. With the pace of climate change and the crisis clearly on our hands, to say that we are among the two European ‘smaller category cities’ for 2020 is something we are hugely proud of. There is a very significant responsibility on us with this award as well as we see this as a requirement to become a role model in the fight for sustainability.”

“We are looking at all sorts of initiatives for this, from altering how all our public spaces are managed so we meet the needs of wildlife and nature as well as the local community to hosting nature walks & talks, seminars and an international pollinator conference in May 2020 which is a huge coup for the city to host,” he added.

Limerick’s European Green Leaf City program got some positive early momentum last week when local authority leads on the program Anne Goggin and Marketing and Communications Head Laura Ryan won an award at the Shannon Region Conference and Sports Bureau for attracting the International Pollinator Conference to Limerick in May.

Anne Goggin, European Green Leaf City Project Team lead at Limerick City and County Council, said “Limerick was awarded the status of European Green Leaf City 2020 as much for its vision of what it hopes to achieve as for what it has already done. In a way, the place we have chosen to unveil our plaque here at Merchant’s Quay reflects this as in the coming year we hope that this green space will develop into an oasis of biodiversity: an exemplar of what can be done in a small urban garden to invite nature in.”

“Our concept for the garden has been developed and planting will begin in Springtime. By summer we hope to have a wonderful display of pollinator and wildlife-friendly flowers and plants which will capture the public’s imagination and demonstrate that environmentally friendly can be aesthetically pleasing. We’re also excited that bookings for our international pollinator conference are now open,” he added.

The full program of events for Limerick’s European Green Leaf City year is set to be announced in January.

Bookings for the international pollinator conference are now open on https://pollinators.ie/conference/