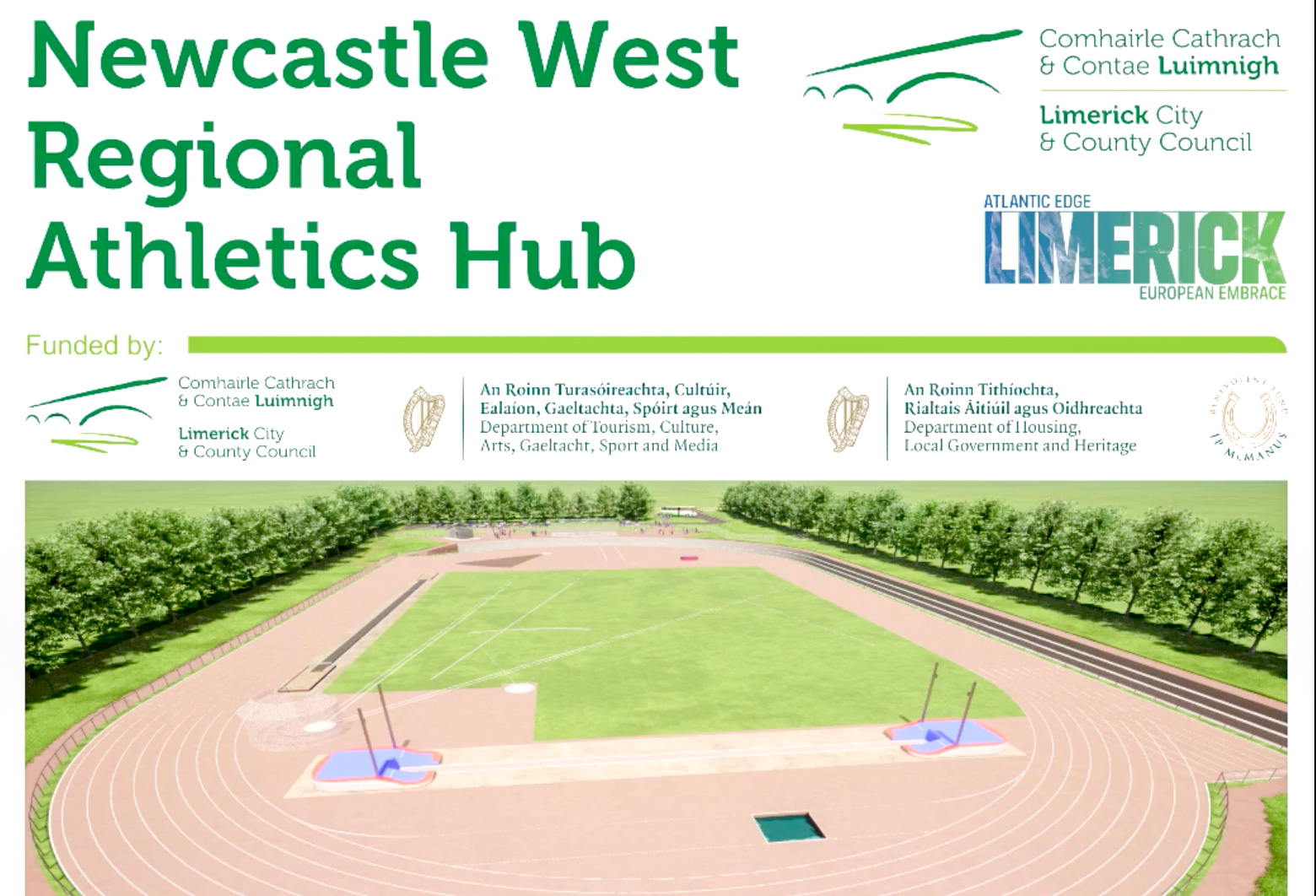 Newcastle West Regional Athletics Hub pictured above has been announced

The new Newcastle West Regional Athletics Hub on the Cork Road in the town includes the construction of an athletics track to international World Athletics standard, floodlights and all associated track facilities, which will have disability access.

Funding for the project has come mainly from Limerick City and County Council and the Large-Scale Sports Infrastructure Fund, which is part of Project Ireland 2040 administered by the Department of Tourism, Culture, Arts, Gaeltacht, Sport and Media. In addition, funding has been received from the Department of Housing, Local Government and Heritage and locally from the JP McManus Benevolent Fund.

The total cost of the Newcastle West Regional Athletics Hub is around €3 million with construction due to commence shortly.

It’s expected the track will be completed by Autumn 2021.

Welcoming the announcement, Mayor of the City and County of Limerick, Cllr Michael Collins said: ““I’m delighted that the new regional athletics hub is now on track and will be available for use in autumn 2021. I have worked hard on the committee to ensure that this project was given the go ahead as I believe it will be extremely beneficial to the people of Newcastle West and the wider West Limerick area. Facilities such as these are important as we know the importance of physical activity and sport for the young and old among us.”

“This regional hub will be a fantastic asset to the town of Newcastle West as we will be able to promote it and use it to attract track meets to our town.”

“Special thanks must go to the track committee and its chair Jim Galvin for their hard work and dedication. I would also like to acknowledge the work of my fellow Municipal district councillors and the many other people and organisations who have supported the project including the ESB Community Wind Farm Fund (Grouselodge), the JP McManus Benevolent Fund and of course, Limerick City and County Council.”

Cathaoirleach of the Newcastle West Municipal District Cllr Francis Foley said: “It is fantastic and see a project which I have fully supported and encouraged from the start get to this point. I want to thank all the committee members who worked so hard to bring this to fruition. I know that this Regional Athletics Hub will be so beneficial to so many organisations throughout the district and beyond.”

Gordon Daly, Director of Community Development and Manager of the Newcastle West Municipal District said: “This will be a great asset to the sporting community and the community in general and will have an important impact on the fitness and lifestyle of many people, young and old. The track will be of the highest international standard allowing it to be used in competitions. The track has been long called for and Limerick City and County Council is very pleased to be commencing construction work shortly on this important piece of sporting infrastructure for County Limerick and further afield.”

Jim Galvin, Chair of the local steering group representing athletics clubs in County Limerick who will be the main users of the facility added: “We are delighted that we have reached this stage and look forward to seeing the facility opening in 2021. In addition to the fantastic support from Limerick City and County Council and the Department of Sport we are also very grateful for the financial assistance from the JP McManus Benevolent Fund and the ESB Community Wind Farm Fund (Grouselodge).”

Related Topics:newcastle west
Up Next