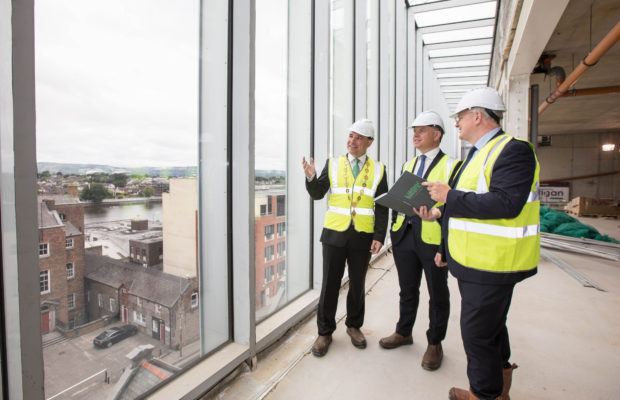 LTT has signed a long lease agreement with Nordic Aviation Capital (NAC), the largest regional aircraft lessor in the world, to expand the lease it signed last September for 51% to over 90% of the 112,000sq ft site.

Welcoming the completion of the deal, Mayor of the City and County of Limerick Michael Sheahan said,  “This is a major vote of confidence in LTT, which was established by Limerick City and County Council to act as a key instrument in the ongoing economic recovery of Limerick.  LTT is focussed on transforming strategic disused sites in Limerick into engine rooms of growth for the Limerick and regional economy. That its first major build in the programme would attract an elite international tenant speaks volumes about the standard being delivered by LTT and, indeed, about Limerick’s attractiveness for world leading brands.”

The 112,000 sq. ft development was officially opened in March after being completed to tenant fit-out stage after an 18 month, €17.6million build.  The project has been built to LEED Gold standards, which is among the top international benchmarks for sustainability. Last month it won a prestigious Royal Institute of Architects of Ireland annual award in the New Build Workplace category.

LTT commenced work in 2017 at the site, which stood half built for almost a decade after work had stalled on the project under a private developer during the economic crash. The uncompleted site was subsequently acquired by Limerick City and County Council, which was established LTT as a special purpose vehicle to develop Gardens International and a number of other key strategic sites in Limerick into transformational projects for the city and region.

The development is a striking mix of ‘old meets new’ as it blends the early 19th century Roches Hanging Gardens, which included roof-top gardens of exotic fruits; the Mercantile Building; the former General Post Office developed there a century later with a gleaming new structure to the rear of the historic buildings.

For more stories about the Gardens International Building, click here.