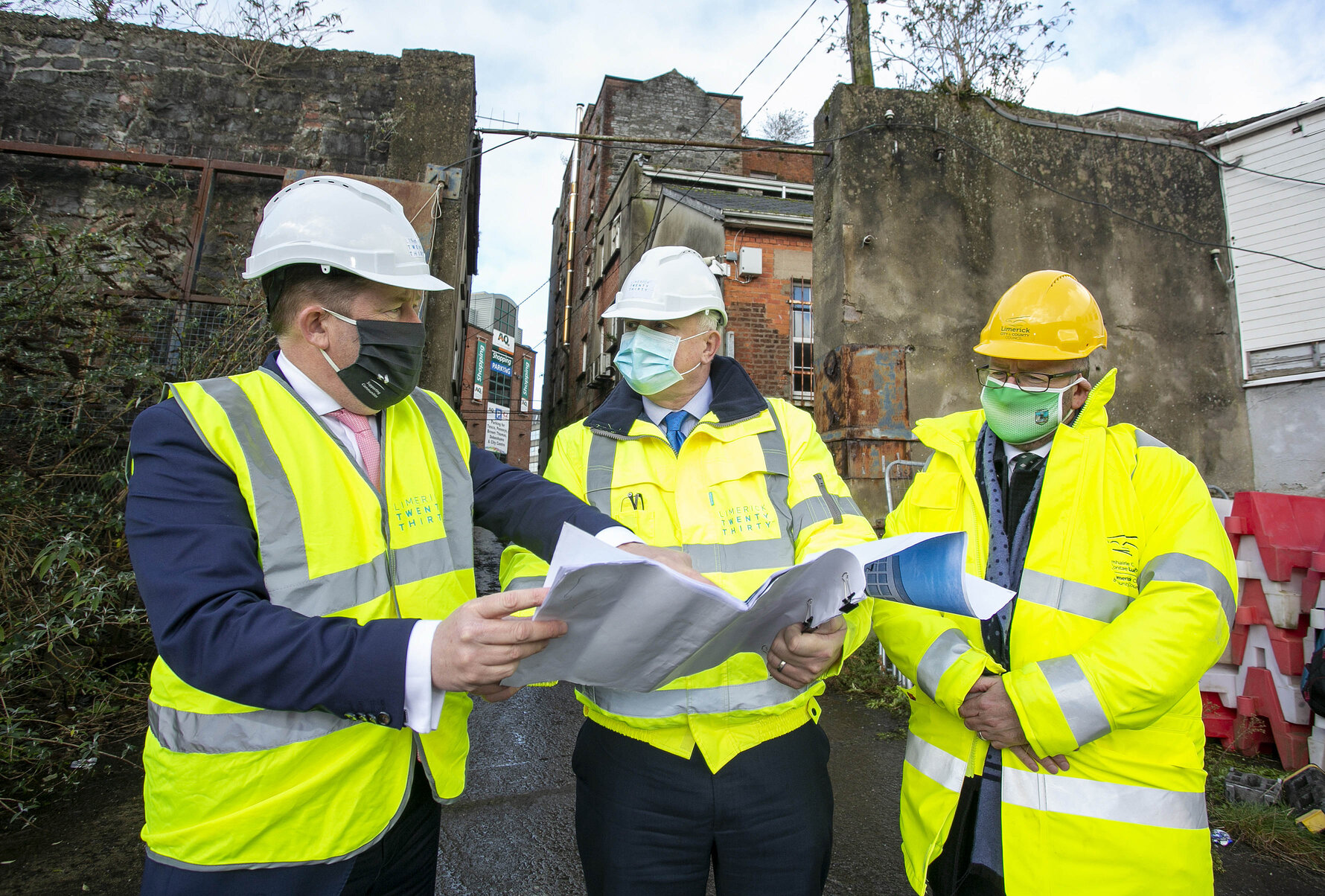 Minister for Housing, Local Government & Heritage Darragh O’Brien declared his All-Ireland hurling final neutrality in Limerick today as he was presented with the county jersey by Mayor of the City and County Michael Collins during a visit to the Opera Site. Picture: Arthur Ellis

Minister for Housing, Local Government and Heritage Darragh O’Brien, TD, has said that the Opera Site and wider Limerick Twenty Thirty programme will be transformational for city, county and region.

Speaking during a visit to the Opera Site, which is being developed by Limerick Twenty Thirty for Limerick City and County Council, at the weekend, Minister O’Brien said that there is a very positive perception also emerging nationally regarding what is happening in Limerick.

“I’m absolutely delighted to be here today to see the Opera Site in person. I’ve had some excellent briefings from the (Limerick Twenty Thirty) team over the last couple of months. But to see it physically and the potential of this but, more importantly, to see the work starting, the fruition of the initial investments and the support that the state has given to Limerick Twenty Thirty and to Limerick City and County, it’s fantastic.

“The potential for Limerick with the development of this site and indeed others that have been identified by Limerick Twenty Thirty is absolutely immense. This will be transformative.”

The Minister’s visit to the site comes just two weeks after commencement of demolition and enabling works on the site by John Sisk & Son.  The Opera Site is the biggest single commercial property programme investment in Limerick and the largest ever outside the capital. The project will be developed over a six-year work programme. When fully developed, the 1.62hectare site will have the capacity for up to 3,000 employees.  Up to 500 people will be involved in construction at peak on the €200m project, which is fully funded.

Minister O’Brien – who was welcomed at the site by Mayor of the City and County of Limerick Michael Collins, Limerick City and County Council CEO Pat Daly and Limerick Twenty Thirty CEO David Conway – said that cities are crucially important for regions. The Opera Site, he said, will be a massive driver for economic development, inward investment and job creation.

Minister for Housing, Local Government and Heritage Darragh O’Brien, TD, has said that the Opera Site and wider @limerick_2030 programme will be transformational for city, county and region.#ilovelimerick #lovelimerick #lovinlimerick #limerickedgelimerickembrace pic.twitter.com/QeJwtAy0np

He continued: “I was actually saying to colleagues today here in my visit in Limerick that the perception of Limerick outside of the city and county is so positive. Limerick has a feel that things are happening and that things are really going to take off.

“Putting a company like Limerick Twenty Thirty in place is an example to others about how we can lead projects like this forward.  The local authority here in Limerick has led by example and has actually got involved when many others wouldn’t.”

Limerick Twenty Thirty Strategic Development DAC (Designated Activity Company) is a property development company playing a pivotal role in the rapid transformation of Limerick into a leading destination for indigenous and international investment.  Established in 2016 as a special purpose vehicle of Limerick City and County Council, Limerick Twenty Thirty is developing strategic sites in Limerick City and County into anchors for enterprise, investment and residential development.

In doing so it will – in keeping with the city and county’s strategic blueprint, ‘Limerick 2030 – An Economic and Spatial Plan for Limerick’ – help drive the economic renaissance in Limerick and deliver very significant social dividends for the city and its residents.