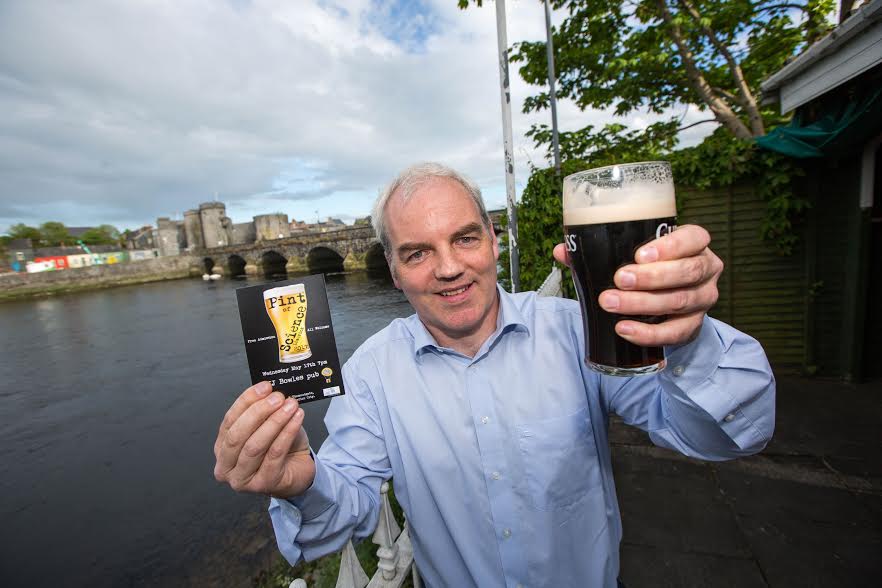 A massive crowd gathered at JJ Bowles Pub in Limerick last Wednesday, May 17th, for a free scientific event called Pint of Science 2017. This novel idea brings scientists to the local pub where they discuss their research with the general public. Luckily for us in Limerick, there is a wealth of scientists and engineers based in the University of Limerick who were up for a pint but were also delighted to talk about their research!!

The main aim of Pint of Science 2017 is to use effective communication that ensures public acceptance and understanding of science. The presenters gave the audience a better understanding of how their research findings impact every-day life, while Professor Ita Richardson ensured that the evening flowed seamlessly as MC. Physical Education and Sports Science (PESS) researcher Dr Tadhg MacIntyre kicked off the evening asking ‘Does going green enhance well-being?’. According to Tadhg’s research yes it does, as does living near the lovely river Shannon. Dr George Grispos from LERO explored the security surrounding smartphone health apps, with his talk ‘Doctor! Doctor! My Smartphone says I’m Sick!’. For anyone who was interested in this software giant, it proved to be a very informative and interesting topic. PESS researcher Dr Mark Campbell then delighted audience members, examining whether computer gaming can really lead to super brains. His presentation topic was ‘Is computer gaming (eSport) reinventing the science of expertise?’

Just before the break, the one and only MACSI researcher Dr Cameron Hall gave us insights into ‘Deciding when to chicken out’ complete with live audience participation and chicken fights! Cameron is a firm believer that Maths is the key to most problems and after Pint of Science, his audience was convinced. Later on, that evening, moving from chickens to machines Chemical Sciences researcher Dr Teresa Curtin spoke about ‘Magic Mufflers’ and how our car engines run, catalytic converters are our cars own ‘magic mufflers’. We then turned to Dr Kevin Moroney, a researcher with SSPC and MACSI, who energised up to the audience as he helped them to get ‘One step closer to the perfect cup of coffee’. Finally, Professor Paul Weaver gave an animated talk on ‘Morphing cars, planes and wind turbines: the shape of things to come’. Paul’s work has implications for the global transport industry, particularly for the air and roads.  While he waits for his call to TV fame, he’s happy to continue living the dream of exploring the material world through maths and models.

The Limerick Pint of Science is organised and sponsored by University of Limerick’s, Faculty of Science and Engineering, Bernal Institute, Lero, SSPC and MACSI. Pint of Science in Limerick was a great night with exceptional talks. All the topics of discussion proved to be very interesting and really engaging to the pub goers. Not only does this unique and novel idea bring future scientific ideas and research to the local pub, it also showcases major research and demonstrates the importance for scientists from all disciplines to be able to communicate to the public.

Outside of Limerick, Pint of Science events is taking place across the UK, France, Germany, Italy, Spain, Brazil, Canada, Thailand, Japan, USA and Australia.  Established in 2012 by Michael Motskin and Praveen Paul, two research scientists at Imperial College London, the event started by bringing together. Researchers and people affected by Parkinson’s, Alzheimer’s, motor neurone disease and multiple sclerosis were brought into their labs and the research was demonstrated to them. It was inspirational for both visitors and researchers. They thought if people want to come into labs to meet scientists, why not bring the scientists out to the people.

To check out previous ‘Pint of Science’ events click HERE

For more information on ‘Pint of Science’ click HERE