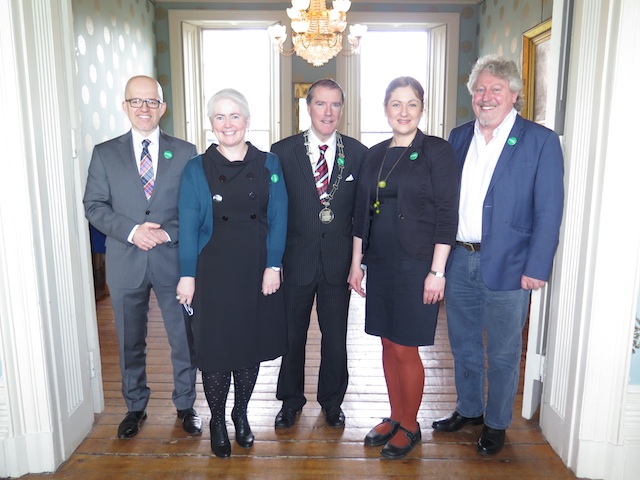 The Polish Vice-Ambassador for Ireland Mr Piotr Rakowsk and Deputy Mayor of Limerick Cllr Gerard Mitchel officially launched Polska Eire Festival 2016. Polska Eire Festival is taking place as part of the Limerick 2020 bid. At the launch the committee discussed various ways Polish community could contribute to the bid and exciting plans were put in place.

In Limerick the celebrations will start on May 20, starting with the multicultural event run by the Bank of Ireland on the streets of Limerick.

Also on that evening at 6pm in Limerick College of Art & Design on George’s Quay there will be a film screening of “Solidarity according to women” followed by a panel discussion with the directors and screenwriter Marta Dzido  and Piotr Sliwowski. The feature-length documentary is a story about some of the brave Polish women whose wisdom, determination and commitment in the opposition movement of the 1980s helped bring about a change of the political reality in Poland. The link between the two aspects of the film is Marta Dzido – a co-director and narrator. Born in 1981, being a symbolic daughter of the Solidarity movement, Dzido makes an attempt at locating and reinstating women who were written out of recent Polish history.

On Sunday 22 May everyone is welcome to join a family day at the People’s Park. The day will be themed “Rising to Freedom” (12pm – 3pm). It will be a great chance to experience the spirit of rising as you walk through various different themed tents, taste a bit of Polish traditional food, enjoy theatrical performances and make your own family tree. All events are free of charge.

This renowned Polish documentary explores the role of women in the Polish fight against Communism. The screening will be followed by a discussion on the role of women in the history of Ireland and Poland. The film directors Piotr Śliwowski and Marta Dzido will introduce the film and talk about its topic after the screening.The film will have English subtitles and the discussion will be conducted in English.