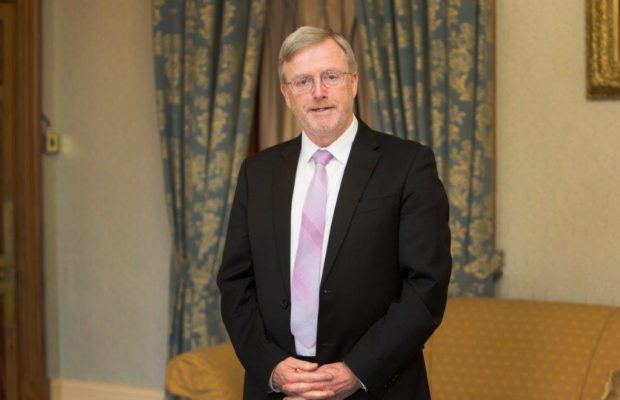 Mary Immaculate College is delighted to announce the appointment of Professor Eugene Wall as its new President.

Mary Immaculate College is delighted to announce the appointment of Professor Eugene Wall as its new President.

Professor Eugene Wall graduated from UCD in 1975 with a degree in psychology.   He was awarded a UCD postgraduate scholarship and undertook a research MA in the field of developmental psycholinguistics.   He qualified as a primary teacher from Froebel College and taught part-time in several third-level institutions in Dublin prior to moving to Limerick in 1980. In 2001, he qualified from UCD with a PhD in Education.

He served for 21 years on the Council of the National Council for Curriculum and Assessment (NCCA) and was a member of several of its sub-committees over that time, including the Co-ordinating Committee which was responsible for overseeing the development of the 1999 primary school curriculum.   He chaired the Council’s Primary Assessment Advisory Group.

Eugene is a co-author of the MICRA-T and the SIGMA-T, the two most widely used standardised tests in Irish primary schools.

Eugene was the founding Chairperson of the Learning Hub, which works in partnership with local education providers, families and young people to develop and implement practical and solution focused responses to the high levels of educational disadvantage and early school leaving experienced by local communities on the North-side of Limerick City.

He was President of the Irish Federation of University Teachers from 1994-1997 during which time IFUT played a key role in shaping the 1997 Universities Act.   Following this, he was appointed for a three-year term to the Higher Education Sectoral Committee of Education International.

Professor Wall has been the Acting President of MIC since January 2017.

The Chair of the Governing Authority of Mary Immaculate College, Bishop Brendan Leahy stated that ‘I am delighted at Prof. Eugene Wall’s appointment. I am sure that Eugene’s passion, energy, and vision will greatly contribute to the College’s developments in the coming years. That Eugene is so well regarded by many in the Higher Education Sector in Ireland, is itself a tribute to his many competencies and personal skills. Having engaged for many years with both the professional Education and Liberal Arts dimensions of Mary Immaculate College, Eugene is well placed to advance the College towards new horizons. In doing so, however, he will be convinced of, and well acquainted with, the significance of the Mercy Tradition in the now 120-year history of Mary Immaculate College. I believe that all staff will find inspiration in his consensus-style leadership as he continues to foster academic excellence and initiative in teaching, learning, and research.

It is a great day, of course, for students because Eugene sees students at the core of all that goes on at Mary Immaculate College. “Is é seo an lá a rinne an Tiarna; bíodh áthas is gliondar orainn” (Salm 118:24)’.

Prof. Wall said ‘I am delighted and greatly honoured to have been appointed as President of Mary Immaculate College. We are an impressive institution with a bright future, contributing richly to the educational, social, cultural and economic life of Limerick, the region and country.   We are broadening our horizons to grasp the opportunities that are afforded to us by the growing internationalisation of what we do.  Over the coming years, I am eagerly looking forward to leading the College during the next phase of its exciting and challenging development’.