By Richard Lynch on October 25, 2017@richanthon 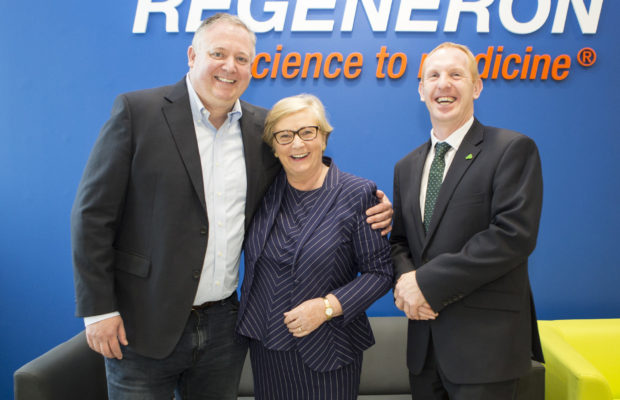 A huge boost in jobs has been given to Limerick after it was announced that Regeneron, pharmaceutical company have created 300 new jobs at their plant in Raheen Industrial Estate.

The company’s headquarters are in New York with their Limerick 4000,000 square foot site based in the old Dell factory at the Raheen Industrial Estate. The workforce at the Raheen plant will now raise from 500 to 800.

The expansion is due to a €84.9m investment and will mean that the Limerick industrial operations and product supply will increase.

Regeneron is a biopharmaceutical company led by physician-scientists for nearly 30 years, they are passionate about repeatedly pushing the bounds of innovation to deliver life-altering medicines. Regeneron is focused on developing drugs for people with serious medical issues.

Their Irish operations include their European business office in Dublin and a state-of-the-art bulk biologics production facility in Limerick. These world-class facilities strive to redefine the drug manufacturing process and establish new standards of quality globally.

The new jobs will be in various areas of the site including process sciences, quality assurance/control/validation and commercial manufacturing.

This new expansion means that the total investment by Regeneron in Limerick is €636million since it’s opening in Raheen in 2014.

The state of the art facility situated in Limerick is one of the largest biological production operations in the world and is the largest scale bulk biologics production facility in Ireland.

This was just one of the good news stories of the day in the employment sector as the investment will also support a number of manufacturing suites to increase drug substance production to be constructed.

Minister for Trade, Employment, Business, EU Digital Single Market & Data Protection Pat Breen has described the jobs announcements in Limerick and Ennis this week as a huge vote of confidence in the economic future of the Mid West.
“Today’s announcement by Regeneron Pharmaceuticals that it is to create 300 additional highly skilled and diverse jobs at its Limerick Campus and invest $100 million, is not only a huge boost to the Mid West economy but reflective of what this region and its people have to offer in terms of infrastructure and talent,” said Minister Breen.
“A significant announcement like this is a testament to our skilled workforce supported by innovative third level institutions in the Mid West Region. It also points to the attractive business orientated environment we have created in the region for such investors and businesses,” he added.
“Recruitment is ongoing for these high-end specialist positions at Regeneron in commercial manufacturing, process sciences, quality assurance/control/validation and various support functions. The project was supported by the government through IDA Ireland.”
“The news follows on from the 50 new jobs announced by Vitalograph, a world leader in the provision of cardio-respiratory diagnostic products at its manufacturing and R&D facility in Ennis,” said the minister of state.“Vitalograph is also to invest €12 million in the Clare facility where it currently employs 100 people.”
“I was delighted to be part of this milestone and it is a very positive reinforcement of our position in the global pharmaceutical, medical and clinical testing sector,” concluded Minister Breen.