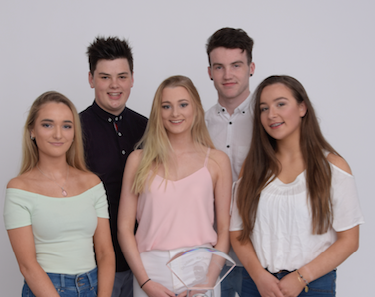 A Limerick City secondary school has been given the prestigious role of naming an award in honor of the late, great Richard Harris. Gaelcholáiste Luimnigh is fast gaining a reputation nationwide for the quality of actors it has among its students.

Drama and theatre studies are an integral part of the Transition Year programme in the school. It has now become an annual event for those students to produce an original play from start to finish, under the guidance of their teachers. The 2016 production, Mobsters’ Paradise, was written by Ógie Ó Céilleachair along with the students. It ran for three consecutive nights, with three different casts in the Millennium Theatre, Limerick on March 10, 11 and 12.

This year, it was decided, to present an award in recognition of the students’ talents. Permission was sought and received from a member of the Harris family to name the award in honour of Richard Harris. Thus “Gradam Richard Harris” came to be.

The process for choosing the nominees was entirely democratic. On each of the three nights the audience tickets doubled as voting cards. Each audience member wrote the name of his or her chosen character on the back of the card and placed it in a voting booth when exiting the theatre. Following a count, five actors have gone forward for nomination: Aoife Harrington, Chloe Milliken, Cian O’Brien, John Lillis and Julia Leonard. The lucky five will now go forward for a second vote by the year group. The winner will be announced at the Transition Year Awards Night, May 2016 in Limerick’s Absolute Hotel.

In recognition of such an important accolade, a trophy has been specially commissioned from master craftsman, Eamon Ó Turraoin, from the An Rinn Gaeltacht in Waterford. Ó Turraoin, a former craftsman with Waterford Crystal, carved this exclusive piece in his Criostal na Rinne workshop. Its elegant design is surely befitting of this occasion.

At time of writing, such an award is unique to Ireland and is only the second acting award to have been named in honour of the great Limerick man. The other Richard Harris acting award being a BAFTA Hall of Fame award which has previous winners such as Daniel Day Lewis in its ranks. The Transition Years of Gaelcholáiste Luimnigh certainly are in the company of greats. Who knows what the future holds for these young actors?