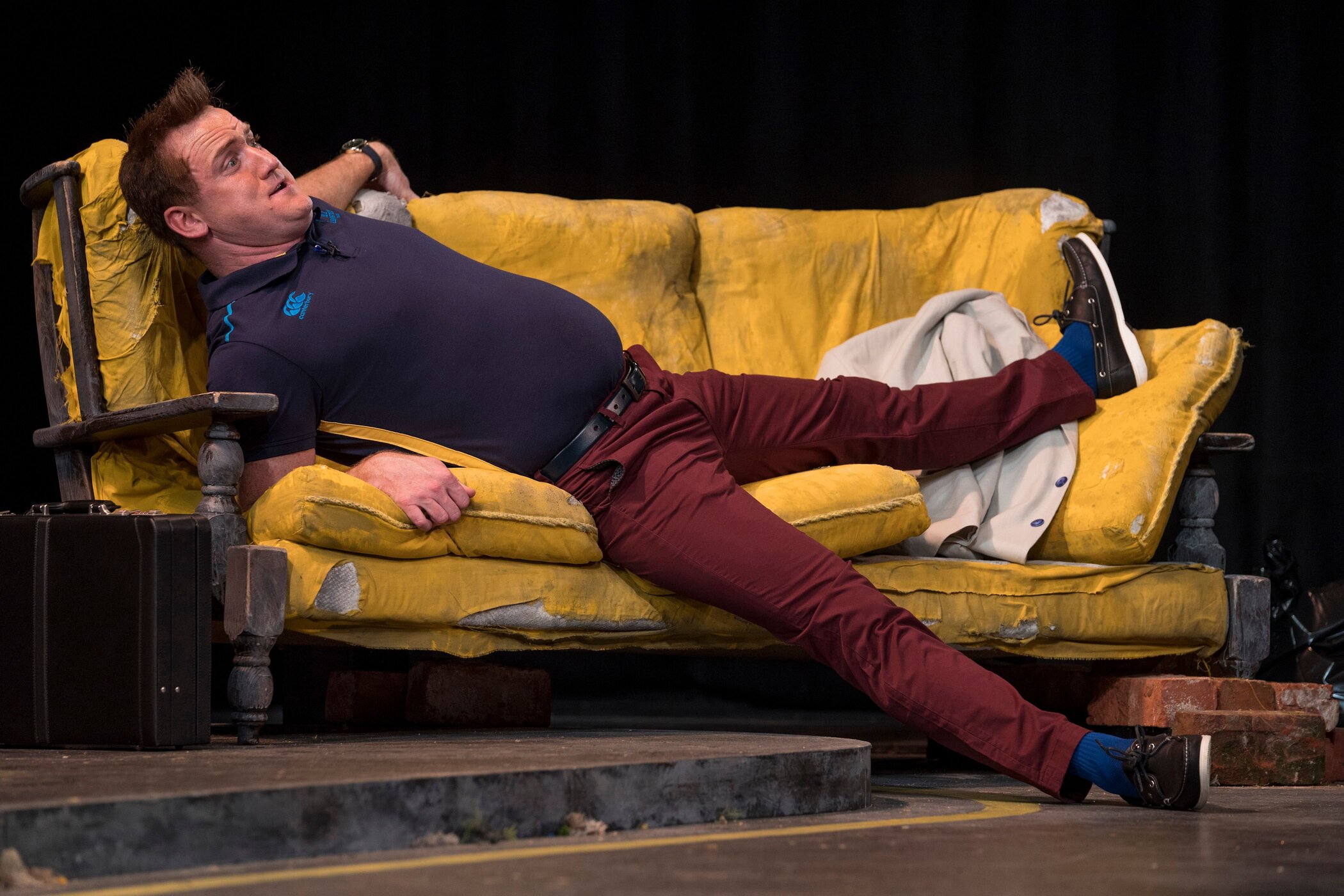 Ross O Carroll Kelly pictured above will be live on stage, for one night only with Postcards from The Ledge

Acclaimed as ‘Ireland’s answer to Homer Simpson’ (Irish Independent) and ‘a comic icon to compare with Alan Partridge or Adrian Mole’ (Sunday Business Post), Ross O Carroll Kelly takes his rightful place in the spotlight once again – but this time he’s beaming himself directly into the homes of his legions of fans.

Landmark Productions presents Ross O’Carroll-Kelly’s Postcards from The Ledge live on stage, for one night only. The Rossmeister General will be coming to you live from Mermaid Arts Centre in Bray to homes all around the world on Saturday, May 15. The show will also be available to watch on demand from Sunday 16 until 23 May. Tickets from €20 including booking fee are on sale now.

Written by Paul Howard and directed by Irish Times Theatre Award winner Jimmy Fay, the show stars the award-winning actor Rory Nolan, who has played Ross since his first stage incarnation 14 years ago.

Speaking about his one night stand – with the whole world,  Ross O Carroll Kelly said: “The Rossmeister General is coming to your gaff! And the lockdown isn’t going to stop me! That’s right, people! I’m taking my act from the stage – and into your bedroom! Or your living room! As a matter of fact, you could go totally mad and enjoy me in every single room in the house! My one-man show, ‘Postcards from the Ledge’, is returning – and it’s being live-streamed. So whether you live in Foxrock or New York, Cork or Cape Town, Limerick or Sydney, you can have me over for the night. Call it a date. And as usual, there are no strings attached.”

Rory's brilliant comic timing as the Rossmeister General is not to be missed. @RossOCK’s #PostcardsfromtheLedge will be beamed into houses all over the world!

Speaking about the announcement, Paul Howard said: “I’m absolutely thrilled that ‘Postcards from the Ledge’ is going to be staged again and that it’s going to be done for an online audience. I’m particularly happy that people will get another chance to marvel at Rory Nolan’s masterful, two-hour performance, which drew standing ovations in live venues all over the country. He is a truly world class actor and I feel privileged that he’s going to be stepping into Ross O’Carroll-Kelly’s Dubes once again.”

Producer Anne Clarke of Landmark Productions  said: “Bringing Ross O’Carroll-Kelly to the stage has been an incredible journey, ever since the first production of The Last Days of the Celtic Tiger, way back in 2007. That was a different world, but some things don’t change – the sheer brilliance of Paul Howard’s writing, the comic genius of Rory Nolan, the careful stewardship of Jimmy Fay. I am thrilled that the journey continues, and is now going global for the first time. I can’t wait to see the gospel according to Ross spread around the world!”

Postcards from the Ledge is the fourth Ross O’Carroll-Kelly stage play, following the hugely successful trilogy of Breaking Dad (which played at the Gaiety to sell-out audiences an unprecedented three times in 2014, 2015 and 2016), Between Foxrock and a Hard Place (2010-2011) and The Last Days of the Celtic Tiger – famously written before the crash, in 2007.

The year is 2029 and Ireland is in the midst of an economic boom. Ross O’Carroll-Kelly is about to turn 50 – and life could not be better for him. His wife, Sorcha, is the Taoiseach. His triplet boys are the backbone of the Castlerock College Junior Cup team. And he still does alright with the ladies. But Ross’s daughter, Honor, is about to get married and that’s when the trouble really begins.

Ross O’Carroll-Kelly is the star of the much-loved, best-selling series of books, and a weekly column in the Irish Times, by the award-winning writer, Paul Howard. Rory Nolan’s masterful performance as Ross has been drawing standing ovations since he first brought Ross to life on stage 14 years ago. Now you can applaud him from every room in your house!

Postcards from the Ledge is presented by Landmark Productions as part of a nationwide virtual tour to venues including UCH Limerick and glór, Ennis.

Ross O’Carroll-Kelly Postcards from the Ledge