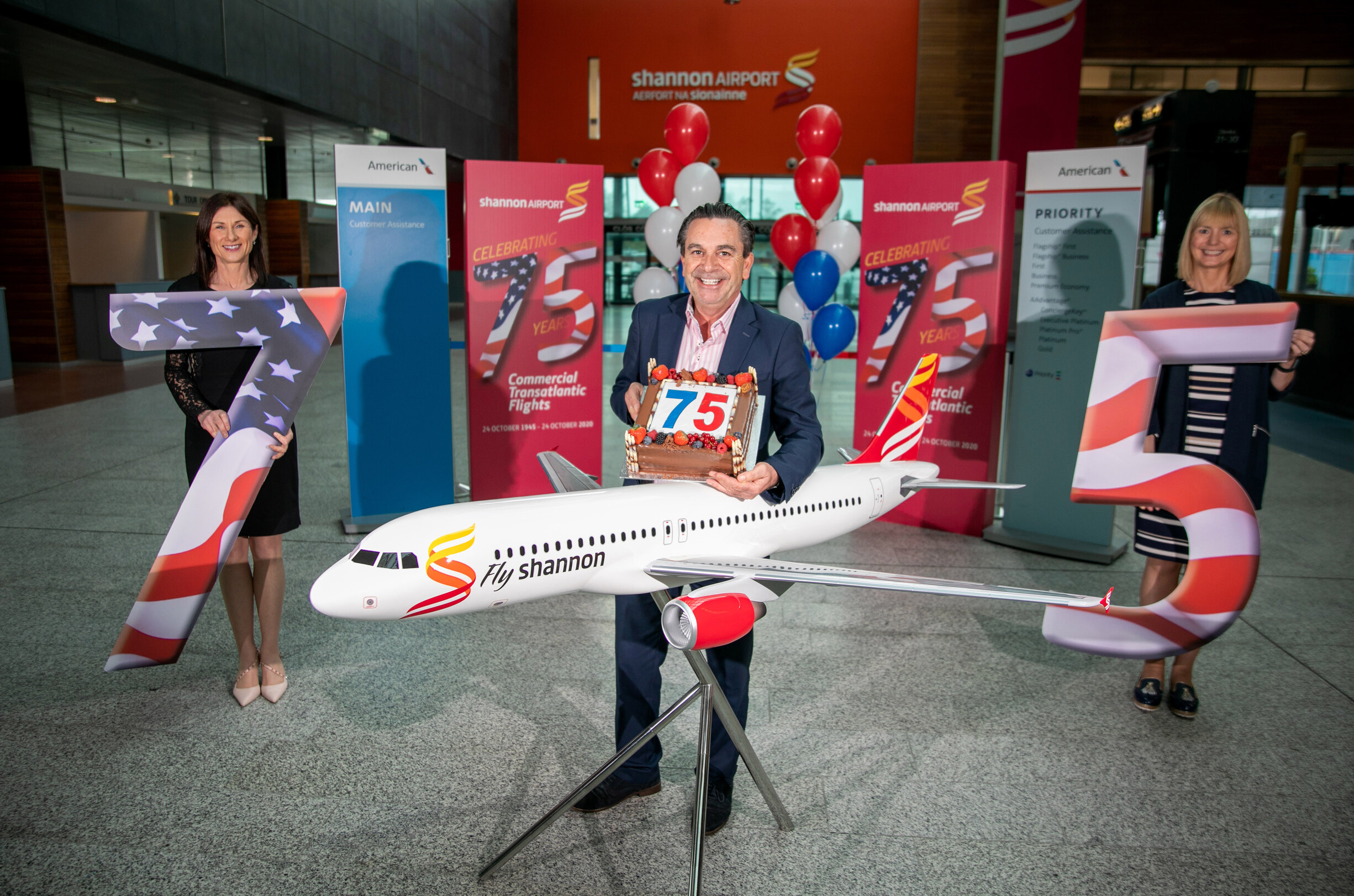 The pivotal role played by Shannon Airport on the national business and tourism landscape was reflected over the weekend on the 75th anniversary of the first transatlantic commercial passenger flight.

Shannon Airport and American Airlines joined to salute the milestone moment in 1945 when an American Overseas Airlines (now American Airlines) DC-4 arrived at Shannon on the 24th October in what was the first scheduled transatlantic commercial passenger flight from the US to an Irish land airport.

The flight landed on the same Shannon Airport campus that exists today, building on proud success already achieved across the estuary at Foynes, which had been receiving ‘flying boat’ arrivals since the late 1930s.

The historic service at Shannon commenced 75 years of transatlantic flights into the airport but, moreover, triggered an industrial and tourism revolution across the Mid-West, West and South of Ireland, and today the activities of Shannon Group, which operates the airport, supports 46,000 jobs.

Said Mary Considine, CEO of Shannon Group, which operates Shannon Airport: “Given the year that we are having, it’s more important than ever that we recognise this historic moment in Irish aviation and economic development.

“That flight paved the way for this region to become a transatlantic gateway, giving rise to foreign direct investment and tourism, which together have become huge drivers of our regional and national economy. It’s particularly timely that we recognise this today as it shows the importance of aviation and Shannon generally and how essential it is to protect this asset and ensure it takes up where it left off once we start to emerge from COVID.”

75 years ago today, the first transatlantic commercial passenger flight arrived into Shannon. That flight paved the way for this region to become a transatlantic gateway, giving rise to foreign direct investment & tourism, which together have become huge drivers of our economy. pic.twitter.com/mSuMoN8s8a

Said Shirley Carroll, Regional Manager oneworld Alliance Hubs, Europe: “American Airlines and Shannon Airport have a shared heritage that goes back 75 years to a hugely important moment in aviation for Shannon and Ireland. It’s a key moment in the extraordinary Irish-US relationship as it facilitated air travel between the two and the building of unbreakable economic and diplomatic ties. We’re very proud of our airline’s heritage in this.”

Ms Carroll added: “American Airlines would have continued that story this year again with our hugely successful Philadelphia service were it not for the COVID-19 pandemic, which has had an unprecedented impact on aviation globally.  But we look forward to taking up where we left off as aviation rebuilds and our relationship with Shannon and Ireland grows.”