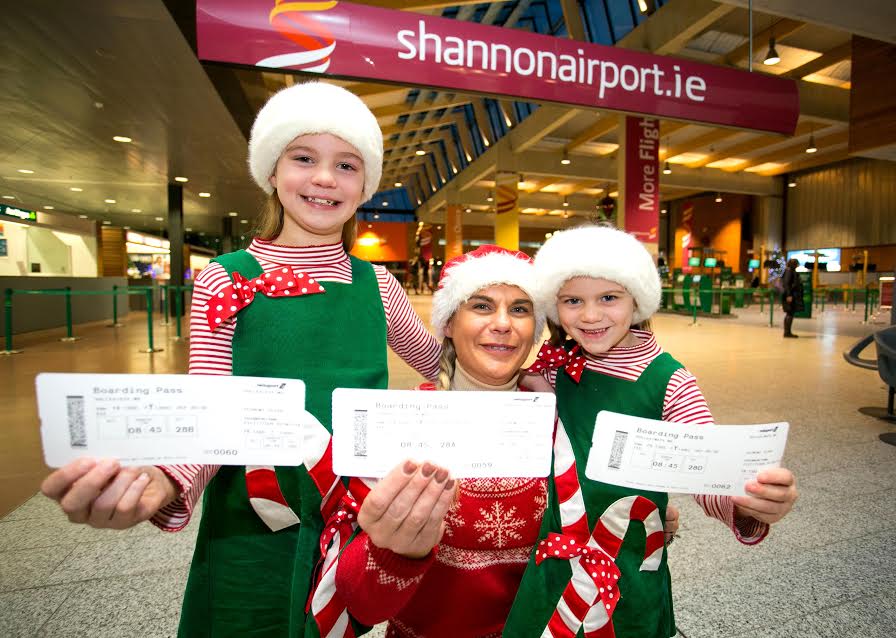 Santa remains top of the popularity polls with the very young as the great man’s annual Shannon Airport Christmas flights have attracted all of 90,000 applications as of today with those numbers growing, the airport has confirmed.

Shannon Airport has received 45 times the number of requests for the 2,000 seats on the very special services to meet Santa in the sky on December 3rd and 4th next, which is an increase of over 55% since last year.

Applications have been received from right across the country, flooding in from each one of the 32 counties and, indeed, from as far afield as the UK.

The top ten counties in terms of applications include Clare, Cork, Dublin, Galway, Limerick and Tipperary, accounting for over 60% of the applications.

Matthew Thomas, CEO of Shannon Group, which operates Shannon Airport said:  “We are delighted at the incredible demand for these flights but can’t say we’re entirely surprised.  Is there really a better draw than Santa!”

“Airports are a magical place at Christmas as they are where homecomings really begin for so many families at this special time of year, not least at Shannon with such a large percentage of passengers flying in to spend time with families from Cork right up to the North West.

But for us, Christmas really begins on the first weekend of December when we will welcome children and adults from far and wide for the Shannon Airport Christmas flights.  It would be impossible to satisfy the demand but not far off 2,000 children will go away extremely happy that weekend from here and that’s a lot of happy young faces.”

A nominal price of €9.99 applies for each Santa Flight seat. The event acts a fundraiser for the Shannon Group’s designated charities – this year they are Galway’s Ábalta Special School for children with autism and complex needs and the Irish Children’s Arthritis Network (iCAN).

In addition, the Shannon Airport Facebook page will be putting out a call over the coming days for nominations for two worthy groups – a charity, a community group or social group – for a block of 20 seats each.

As for the 2,000 tickets, they will be selected by lottery today, with the lucky entrants being notified on Tuesday next, November 15th.  There is still time to enter, with all details available on the airport’s website as the closing date midnight tonight!

Bookings are confined to a maximum of six but with the airport determined to ensure as many children as possible avail of the very special Christmas treat, a maximum of two adults will be allowed with any group of six.  No child will be allowed on their own without an adult.

The flights were introduced in 2013 to mark the airport’s first year as an independent entity and act as a thank-you to the region for its support but such has been their popularity that they have returned each year since.

“It’s a hectic two days but we are really looking forward to it. We’re so thankful to all the volunteers who give their time to make it happen and the generous support of our partners at Swissport, without whom it would not be possible.” added Mr. Thomas.

That magic begins for children on arrival, with characters from their favorite cartoons on hand to welcome the special guests as the transit lounge is transformed into a winter playground.  There will be a disco, elves, a puppet show, face painting and plenty of other fun and games.