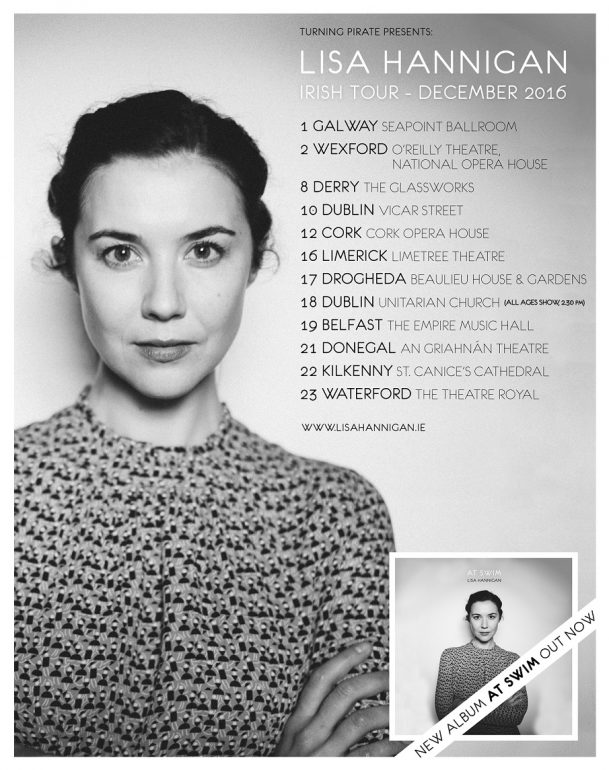 Pictured above is Lisa Hannigan At Swim.

Lisa Hannigan, the popular Irish folk and indie singer-songwriter is coming to the Lime Tree Theatre this December 16 as part of her country wide tour ahead of her newly released album, ‘At Swim’.

‘At Swim’ is the songwriter’s third album which was released worldwide on August 19 under the management of Hoop Recordings.

The album contains 11 tracks of folk and indie bliss which are guaranteed to convert even the most cynical of listeners on her side.

Hannigan left University where she and Damien Rice traveled across Europe creating magical music along the way.

Returning to Ireland, both Hannigan and Rice began to work together recording music. Hannigan featured on Rice’s first two solo albums and a number of EP’s and live recordings. Both Irish artists toured for a number of years together, but in 2007 Hannigan went solo.

The songwriter who says her inspiration comes from the remarkable Irish poet, Seamus Heaney, witnessed her career rocket back in 2008 when she released her debut album, ‘Sea Sew’ which was nominated for a Mercury and Choice Music Prize.

Shortly after that, Lisa’s talent wasn’t unnoticed as she supported Jason Mraz, the Grammy-nominated Californian singer-songwriter on a 42-date US tour in late 2008.

She seems to do no wrong with each album she releases as, ‘Sea Sew’ and ‘Passenger’ were both nominated for multiple prestigious music awards and it won’t be long until ‘At Swim’ will be counting the nominations. Lisa Hannigan At Swim

Tickets for Lisa Hannigan’s performance are on sale now and can be purchased here.