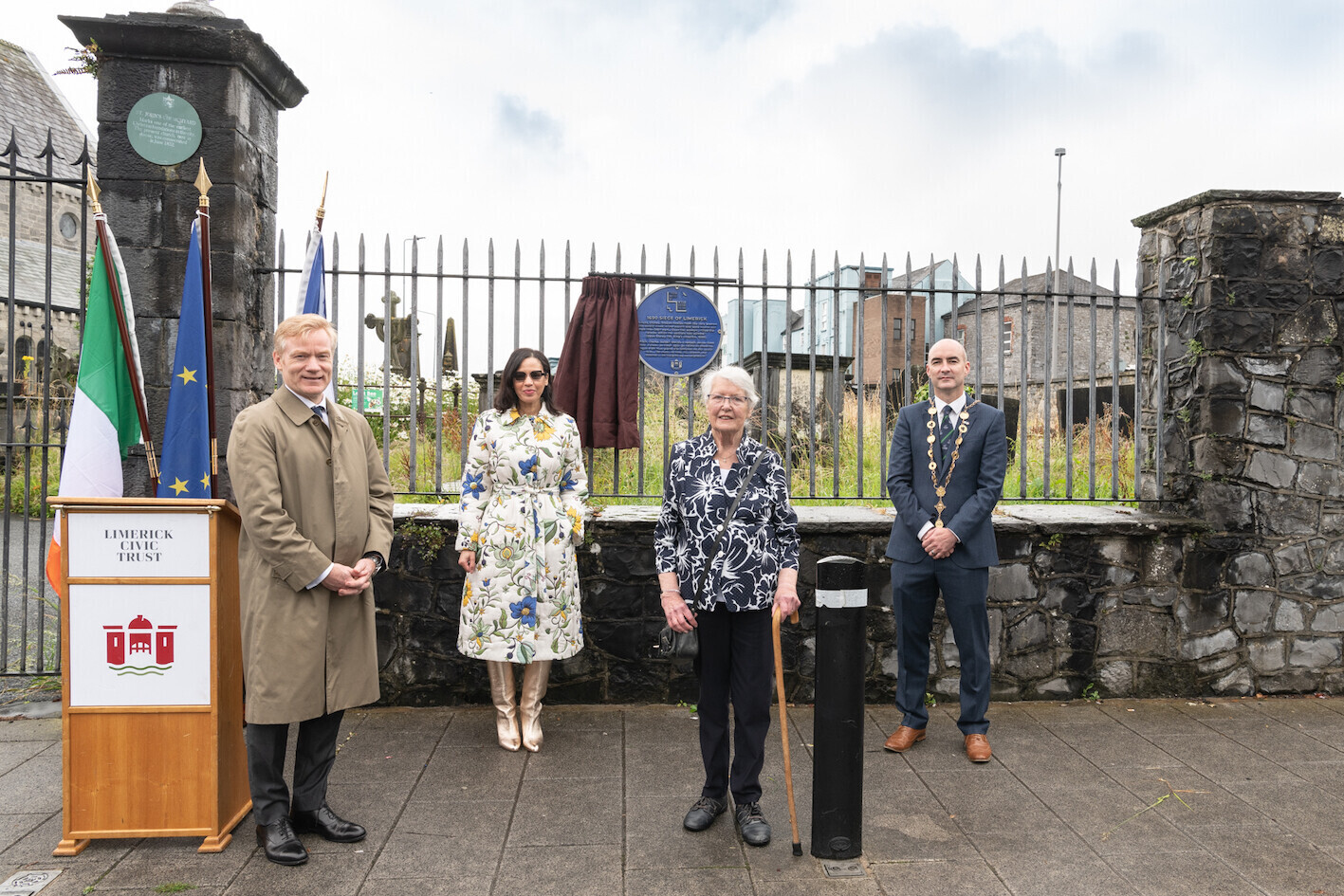 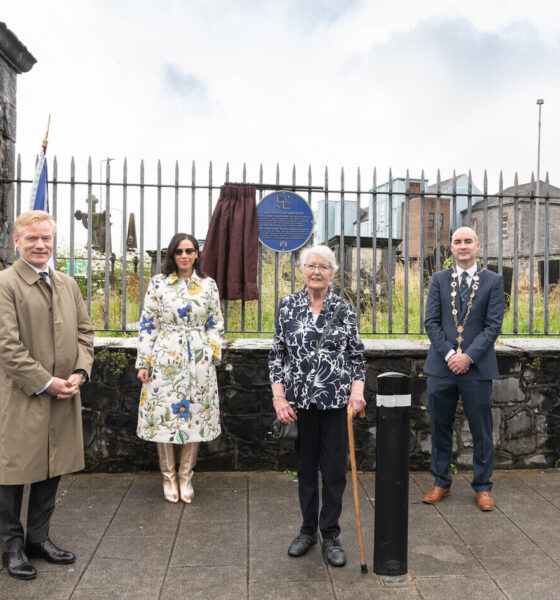 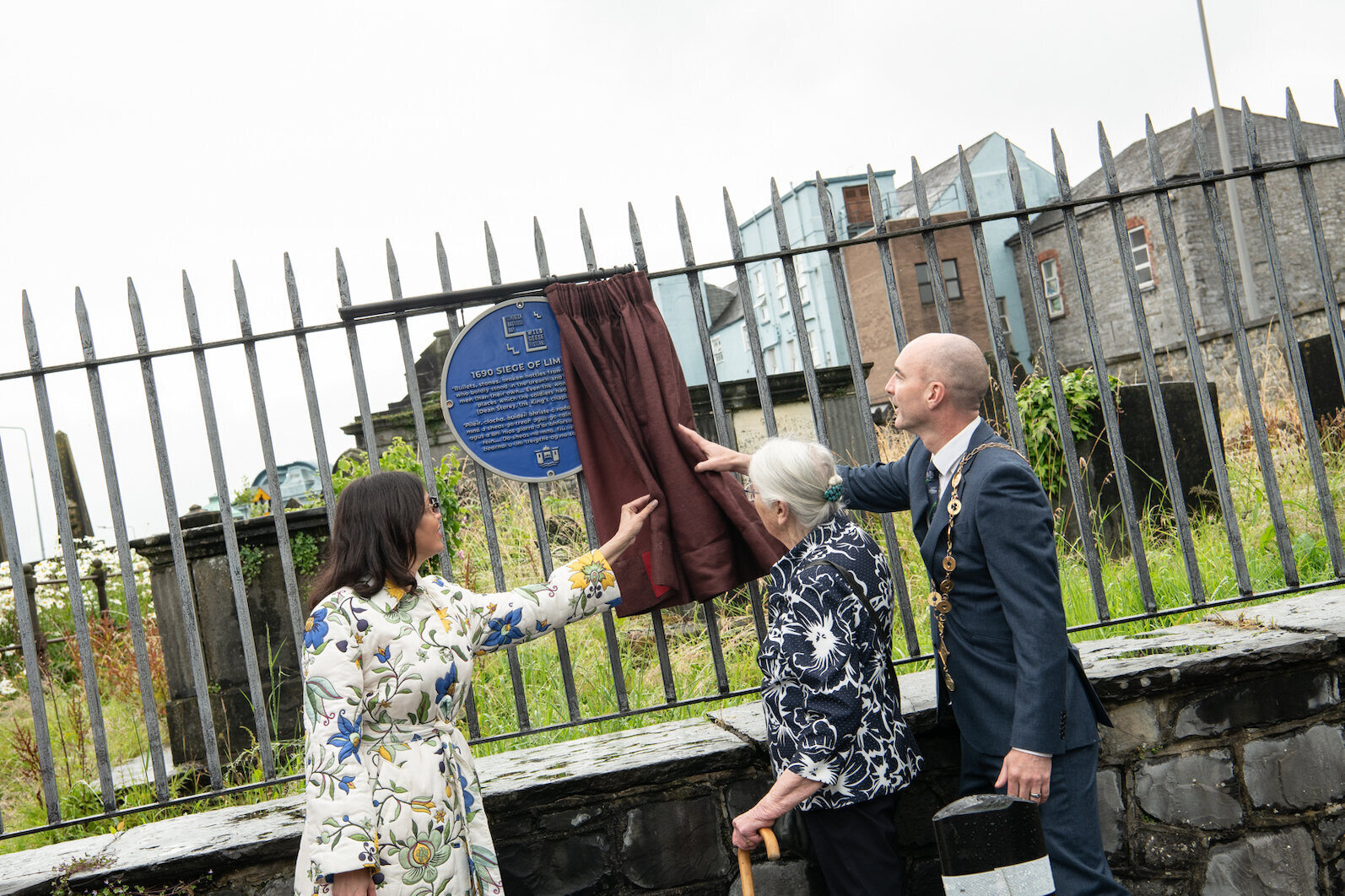 As part of this year’s edition of the Limerick Bastille Day Wild Geese Festival, co-organised by the Honorary Consul of France in Limerick and the Limerick Civic Trust, the Mayor of Limerick City & County, Cllr Daniel Butler and the Ambassador of France, His Excellency Vincent Guérend, presided over a ceremony on St John Square on the occasion of the unveiling of a plaque in honour of the women of Limerick who fought so bravely to defend their city during the Siege of Limerick 1690.

Former Mayor of Limerick Kathleen Leddin was also invited to speak and to unveil the plaque along with Mrs Mariam Diallo, Cultural Counsellor at the French embassy. The moving ceremony was witnessed by members of the Garryowen Residents Association and members of the community who were the only ones to have been invited to attend due to the particular nature of the venue and Covid-19 restrictions on large gatherings.

Five young women students from Scoil Uí Ruairc performed a short but fitting dance routine at the end of the event.

As part of our festival Mayor @DanielButlerFG & Ambassador of 🇫🇷@vincentguerend, presided over a ceremony on St John’s Square last Sunday for the unveiling of a plaque in honour of the women of Limerick who fought so bravely to defend their city during the Siege of 1690. 1/ pic.twitter.com/ttPrwFxupm

Commenting in her speech the particular historical event that inspired the plaque, Mrs Leddin said, “At the Siege of Limerick 1690, when Williamite forces attacked Limerick, the women of Limerick stood amongst the shattered walls and used the broken stones as weapons against the attackers. We are told they ‘tended the wounded and succoured the fallen’ but more than that, they took their place in front of the advancing ranks to repel their attackers. Not only did they fight, but they led. This, I think, is a fine lesson to remember, that as Limerick women, we should take our rightful place and lead from the front.”

Mayor Butler said, “History always tells the story from a particular point of view, usually and traditionally the victors’, and it is wonderful that so many of the stories of the Siege of Limerick 1690 recount the heroics and bravery of the women, as well as the men of Limerick. Women played a central role in defending Limerick against the Williamites and it is only right and proper that we remember these women and their efforts in defending the city.”

Ambassador Guérend added, “I commend the Wild Geese Festival and the Limerick Civic Trust for honouring the role played by the women of Limerick in the defence of their city more than 300 years ago. May this shining example be a reminder that our societies are much better served when the whole population and not just half of it, has the same access to decisions.”