Signals of Change Collection from the Crawford Art Gallery 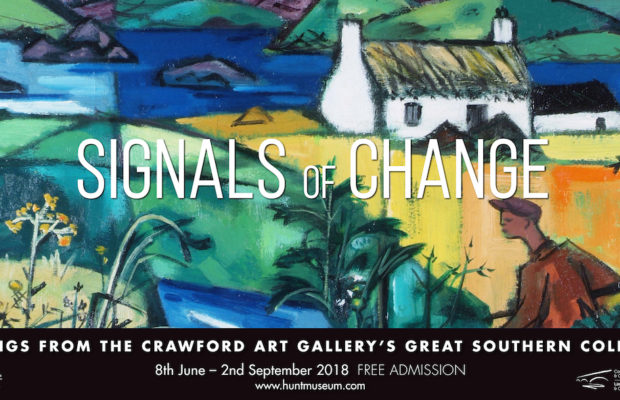 Signals of Change Collection from the Crawford Art Gallery

The Hunt Museum’s summer exhibition features Irish paintings from the mid to late decades of the twentieth century which were very important times in the development of the visual arts in Ireland. The works are drawn from the Great Southern Art Collection which was presented to the Crawford Art Gallery, Cork by the State in 2006.  This is a rare opportunity to see a  collection that has not been on view very often.  The collection was assembled by Ireland’s transport authority CIE – Coras Iompair Eireann, and named after the prestigious Great Southern Hotels located in Killarney, Parkansilla, Rosslare, Cork, Galway, Sligo and Dublin that formed part of the CIE group.  This collection was one of the first corporate art collections in Ireland.

David McBurnie, Hunt Museum Docent having done some great research on mid to late 20th Century Irish Art came up with the singularly appropriate title: Signals of Change, reflecting the Irish Railway connection and because as he said:  “the collection really represents the change from purely representational to more abstract art in the mid 20th Century with a woman at the forefront in Nora McGuinness with her “River to the Sea” of 1959”

Included are fine examples of landscape, figurative and non-representational works.

The Hunt Museum is delighted to be collaborating with the Crawford Art Gallery, Cork and once more it is a great opportunity for Limerick and the museum to showcase these wonderful works from National Cultural Institutions, highlighting the riches and treasures in other collections and bringing them to regional audiences and wider public attention.

For more information on Signals of Change, go here.