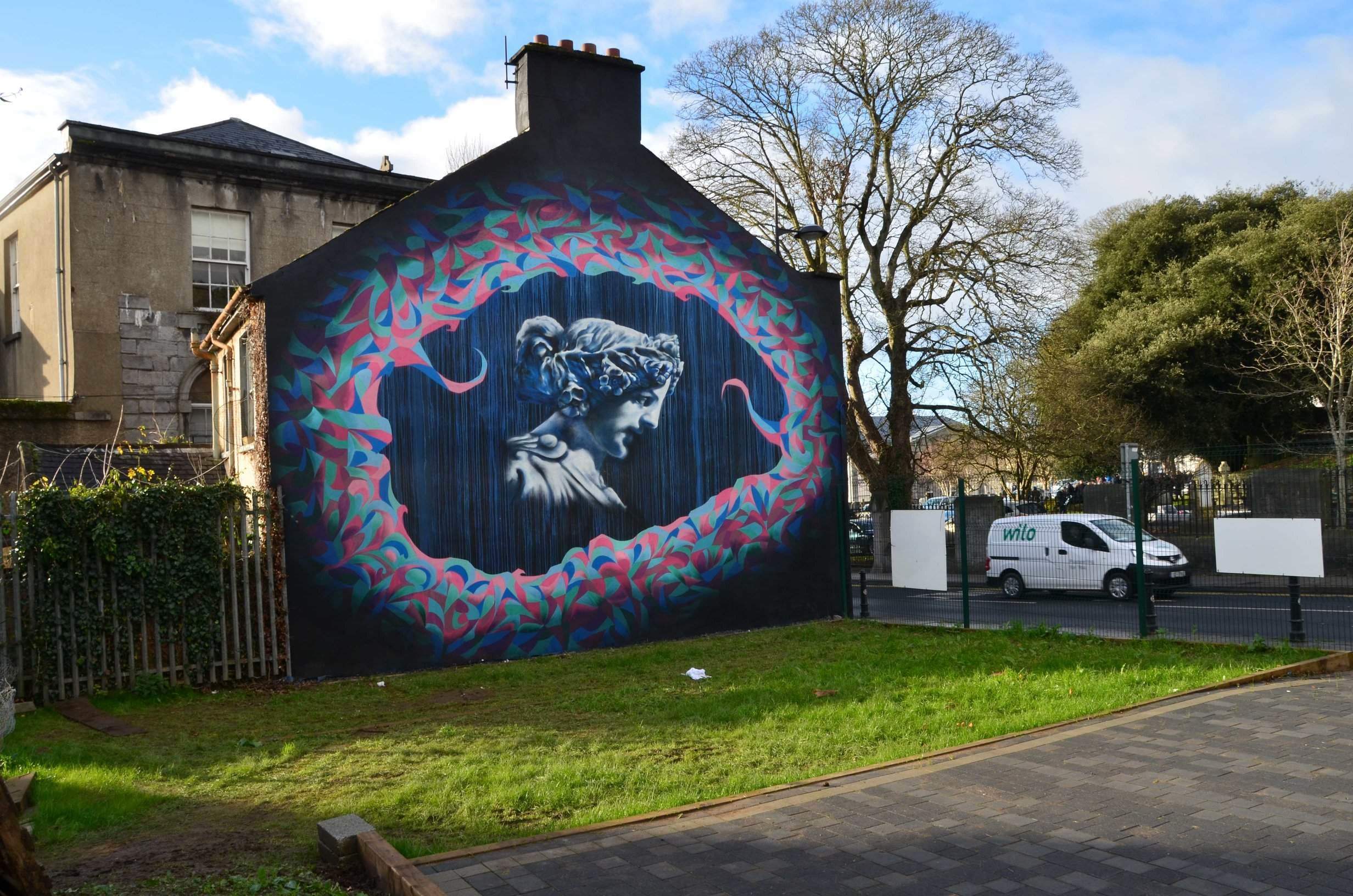 Goddess Sionna of the River Shannon, is the inspiration behind the latest Limerick Sionna mural that’s catching the public’s eye as people walk and drive to and from the city centre.

The giant Sionna mural spread across a gable on Bridge Street is part of an ongoing programme by Limerick City and County Council to enhance the aesthetics around disused city sites.

The local authority has collaborated on this project with Limerick Civic Trust – a self-funding charity, which initiates and undertakes a programme of projects for the general improvement of Limerick’s environment – to transform the long-since disused location into a public amenity.

The mural of Sionna is located at one of the busiest thoroughfares in the city, with thousands of people passing by the site daily, which is directly across from one of the city’s top visitor attractions, the 12th century St. Mary’s Cathedral. Funding has been provided by Limerick City and County Council.

The mural is the second phase of the rehabilitation of the site; with phase one having commenced in the summer with the clearing of the site and development of a public amenity garden.  The third and final phase will be the planting of a scented garden in the spring of next year.

The mural itself was designed and painted by Bold Details – two Limerick School of Art & Design students, Cormac Dillon and Jonathan Noonan, who are also urban artists in a private capacity.

Maria Donoghue, Executive Architect with Limerick City and County Council said: “As the landscaping works on the site were being completed, the opportunity to include a mural on this very prominent wall presented itself.  Bold Details certainly responded to the task to create something simple, relevant and striking for this site that is so closely located near St Mary’s Cathedral.”

“The site is in a very strategic location between Medieval Limerick and the Georgian grid, and this wall acts as a doorway between the two.  Borrowing from Georgian architecture, which sometimes features Greek or Roman gods and goddesses, we decided to paint our own ‘Georgian doorway’ and include our local goddess, Sionna, the Goddess of the Shannon.”

“We are very happy with this powerful work that Bold Details have created for us and the impact that this mural has had, not only on the site, but more so on the people of Limerick judging by the very positive response it has received so far.”

David O’Brien, Chair of Limerick Civic Trust said:  “We are really pleased with the outcome.  The mural is a really striking piece and reflects the history and heritage of this inner Limerick gateway brilliantly.  The two guys were a pleasure to work with and we are delighted also that they are from the Limerick School of Art and Design, a great Limerick institution that is renowned internationally.”

“Our next phase is to finish the garden itself and we look forward to doing that next year.  We will effectively have taken out an eye sore close to the city centre and turned it into something really positive and powerful for everyone to enjoy.  It’s another fine public amenity for Limerick and part of the great new fabric of the city.”

For more stories on art in Limerick click here

LIT Degree in Manufacturing 4.0 at new campus is first of its kind in Ireland

The Autonomy Project to harness power of Limerick youth