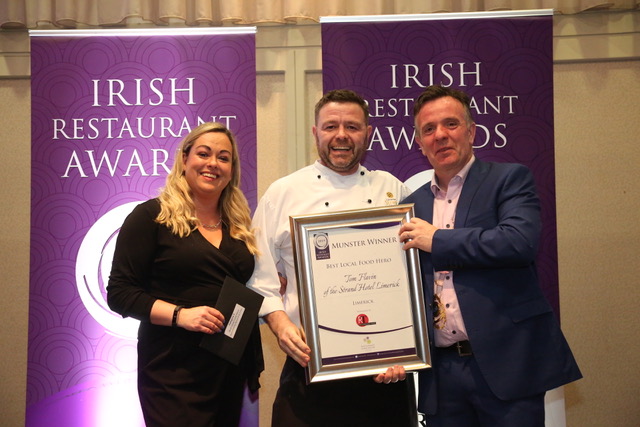 The Munster Regional Final for the 2019 Irish Restaurant Awards took place in the Limerick Strand Hotel, where awards were presented to the country’s leading chefs, restaurants and pubs. With Executive Chef, Tom Flavin coming away with “Local Food Hero” award and The River Restaurant winning in the Best Hotel and Guesthouse category, it was a great night for the popular four star hotel.

Over 550 people attended the third of four regional events, where the top establishments in each county were named and staff celebrated their hard work and achievements at the Award Ceremony.

Speaking at the awards, Adrian Cummins, Chief Executive of the Restaurants Association of Ireland (RAI) said: “Now in their 11th year, the Irish Restaurant Awards continue to showcase the incredible food that is on offer in the cafes, pubs and restaurants of Ireland, as well as recognising the teams behind these establishments and the hard work and dedication that they put in. With well over 90,000 nominations received from the public this year, the standard for the judging process was higher than ever. Ireland may be a small country, but it boasts everything from fine dining to high quality gastropubs, from the comfort of traditional Irish food to exploring the world though exotic world cuisine, the Irish restaurant industry has much to offer. We have an appreciation for what we eat and where our food comes from, as well as the dedication of those working in the food industry”.

All of those who won at county level will now compete for the Regional and All Ireland Titles, which will be announced at the Irish Restaurant Awards. These will be held in the Clayton Hotel, Dublin on Monday 13th May, 2019.

Tom Flavin, Executive Chef and his culinary team pride in serving the finest quality of Irish and international cuisine, with an emphasis on fresh, seasonal produce with all the food traceable and where possible an emphasis on using locally produced products.

“The popular TASTE THE PLACE menu has been passionately developed over the past 10 years by Executive Chef, Tom Flavin who is a highly innovative individual constantly striving to educate guests on the importance of food provenance. The four-course menu, celebrates food provenance and local suppliers so we are delighted that Tom got the recognition, he so richly deserved from his peers” said General Manager, Stephen O’Connor.

Tom was thrilled to receive award for ‘Local Food Hero” Limerick.  With over 20 years experience in the hospitality industry Tom started his career in Manila where his flare for impressionable presentation of food was born through his vegetable and ice carving training.   Prior to returning to Ireland in 1999 Tom spent time in Singapore, the UK and Australia in a variety of five star hotel kitchens and fine dining restaurants overseeing banqueting kitchens.  This gave Tom his extensive knowledge of International fine dining cuisine.

“This award is very close to my heart.  Anyone who knows me will know my passion for supporting local suppliers and using the freshest produce available.  In my role as Food Champion with Failte Ireland, I have had the privilege to meet, like minded people and spread the “Taste the Place” ethos we have introduced in our revamped Terrace Bar & Restaurant,” said Tom Flavin.

Limerick Strand is currently preparing for a big reveal of their €1.6 million refurbishment programme in early April and also will be presenting exciting new-look Terrace Bar & Restaurant with an exciting new menu offering.