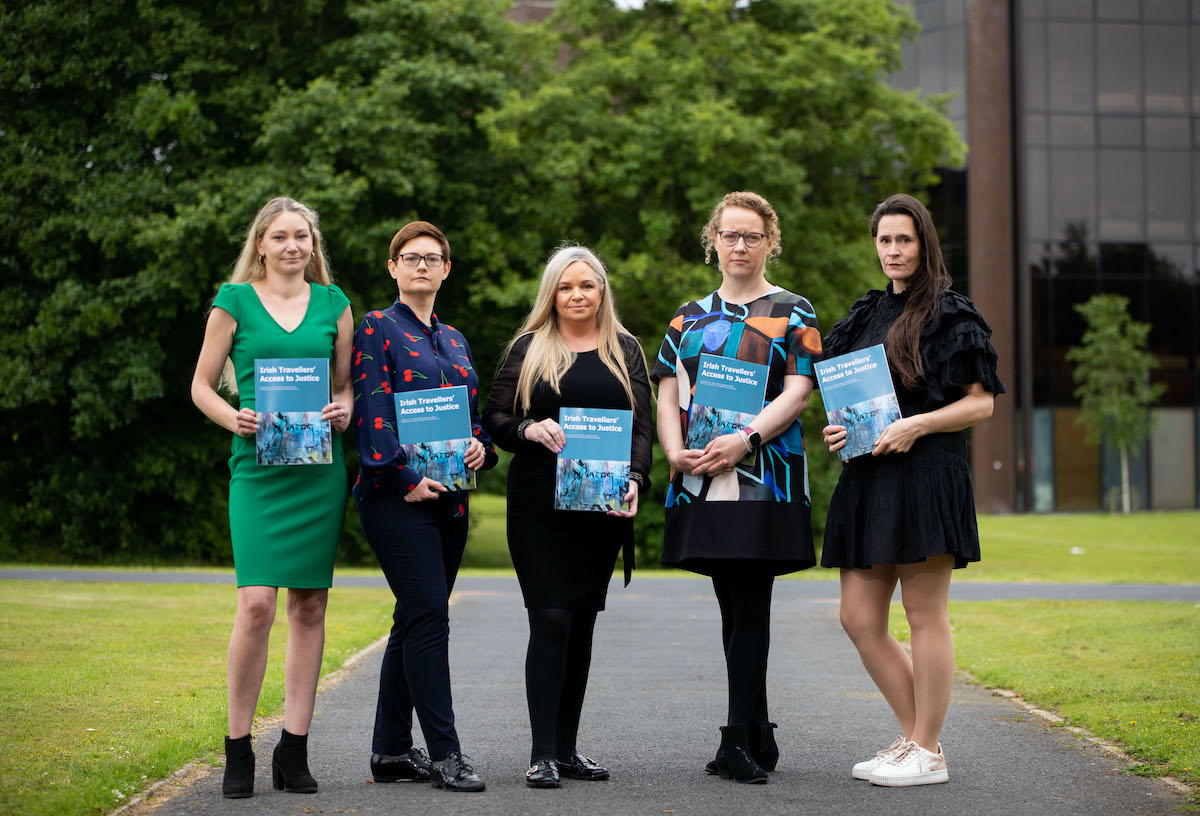 A ground-breaking new study by researchers at University of Limerick has examined for the first time the relationship between Travellers and the Irish criminal justice system.
The Irish Travellers Access to Justice (ITAJ) report by the research team at University of Limerick was officially launched this Thursday morning.
Funded by the Irish Human Rights and Equality Commission and the Irish Research Council under the COALESCE programme, the research documents for the first time Travellers’ perceptions and experiences of the criminal justice process in Ireland – particularly with the judiciary and An Garda Síochána.

The report is the culmination of an 18-month long project that Chief Commissioner of the Irish Human Rights and Equality Commission Sinead Gibney has said is a ‘landmark study’ in both its conduct and findings.

It is an authoritative analysis and makes evidence based recommendations for measures to address Travellers’ ability to use the tools of the criminal justice system to protect their rights. Among the key barriers to accessing justice is institutional racism towards Travellers found to be prevalent in the criminal justice system.
The report utilised a mixed methodology, including a survey, interviews and focus groups. During the course of conducting the research, the UL researchers spoke with one in every 100 Travellers in Ireland from 25 of the 26 counties.

The research findings reflect a need for radical changes in the way in which criminal justice institutions engage with, perceive, and address Travellers.

The report meticulously documents Travellers’ perceptions and experiences of criminal justice institutions as suspects, victims, and those who are the accused in criminal cases.

Sinead Gibney, Chief Commissioner of the Irish Human Rights and Equality Commission, said: “This report breaks new ground in speaking with a huge diversity of Travellers nationally about their personal experiences with our criminal justice system as victims of crime or as those accused. It is abundantly clear that the relationship between Travellers and our criminal justice system too often starts from a point of mistrust, developed over decades.

“This report needs to be read and shared widely and to be used as an evidential grounding for reforms, to make our criminal justice system accessible by all.”
Speaking about the research, Professor Amanda Haynes, Department of Sociology, UL said: “To be able to use the legal process to protect your rights, you must first trust that system enough to engage with it. This report shows that Travellers do not trust the Irish criminal justice system to treat them fairly, and that their mistrust in grounded in personal and shared experiences of unsatisfactory and sometimes biased treatment at the hands of criminal justice professionals, as victims and suspects.

“While Travellers participating in this research identified examples of excellence among police and judges, these experiences were described as the exception rather than the rule.”

Professor Jennifer Schweppe, UL’s School of Law, said: “Our research shows that Travellers are simultaneously over policed as suspects and under policed as victims. Our research findings, which mirror key findings of the European Union Fundamental Rights Agency Roma and Travellers in Six Countries, evidences significant human rights concerns within and across the criminal process with respect to Travellers.
“Justice is not seen to be done in Irish courtrooms by members of the Traveller community.”

Dr Sindy Joyce, Lecturer in Traveller Studies in UL’s Department of Sociology, said: “The results of this research will come as no surprise to members of the Traveller community, whose experiences and perceptions of the criminal justice process are unequivocally linked to both their identity as a historically traditionally nomadic community, and their present day status as a racialised indigenous ethnic group in Irish society.

“It is of paramount importance that this research is used for the benefit of Travellers, and to guide the criminal justice system in bringing out the meaningful change it shows is required.”
Supreme Court Judge, Mr Justice John Mac Menamin; Chief Commissioner of the Irish Human Rights and Equality Commission, Sinead Gibney; Superintendent Michael Corbett of the Garda National Diversity and Integration Unit; and Maria Joyce of the National Traveller Women’s Forum attended the launch of the report this Thursday morning along with UL President Professor Kerstin Mey. Minister for Justice Helen McEntee TD presented a pre-recorded statement.

The research was advised by representatives of the National Traveller Women’s Forum, The Irish Traveller Movement, Pavee Point, Minceirs Whiden, The Traveller Mediation Service, An Garda Síochána, the Department of Justice, the Irish Human Rights and Equality Commission and the Irish Research Council.

Key findings from the research include:
Experiences:
Half of the Travellers responding to the ITAJ survey were victims of criminal offences in the five years prior to the survey; only one-fifth had been arrested in that time period; Half of those surveyed had been present in a home that gardaí entered without permission;

when asked about the last case in which that happened, in only 11% of those cases was a search warrant shown to someone present in that home;
Travellers report hearing expressions of overt racism by gardaí and judges;

64% of Travellers who were in garda custody in the five years prior to the survey did not feel safe the last time they were in custody;

Travellers described positive experiences with criminal justice professionals as characterised by the professional treating them respectfully – listening to them, being compassionate, vocally defending their rights and dignity and being responsive. However, positive experience with one individual from a criminal justice institution, being for most respondents the exception rather than the rule, did not alter respondents’ perceptions of the institution as a whole;

Key Recommendations
Drawing on the findings, the research makes extensive evidence-based recommendations, including:
The introduction of an ethnic identifier throughout the criminal process from the point of reporting to the point of sentencing, including entry and search of homes and stops and searches which must be recorded. A commitment to make the resultant data available to independent researchers. The publication of an annual report on ethnic minorities in the criminal process.

The development, publication, funding and implementation of a criminal justice strategy for the Traveller community, with a remit within and across each branch of the criminal process to address gaps in trust, legitimacy and accountability impacting the Traveller community. This strategy should include the development of an independent Traveller justice advisory group to provide advice on justice related issues and to monitor implementation of the strategy.

The establishment of a robust and effective independent complaints body operating across the criminal legal process and staffed by a dedicated team of investigators with no continuing connection to any of the criminal justice agencies. This body should be able to accept and respond to complaints regarding any criminal justice agency or professional including customs officers and judges.

UL Early Career Scholarship launched at the University of Limerick