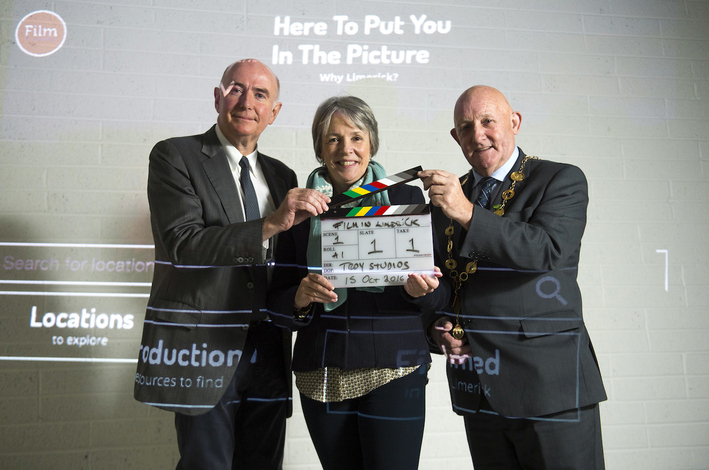 A ‘shop window’ for film producers across the world, showcasing the advantages of filming in Limerick has been unveiled.

Troy Studios Film in Limerick is a new resource for the film, television, moving image art and online video industries to promote Limerick and the wider mid west region as a film destination.

As part of the comprehensive offering, a website has been developed by Innovate Limerick, with the goal of facilitating the growing film and television production industry in the region by providing a service to find locations and production resources.

Film in Limerick has actively engaged with professionals and the public to gather information and provide a reliable up-to-date information resource.

Film in Limerick has been designed to complement the work of Troy Studios, essentially it is a one-stop shop containing information on film locations, professionals, accommodation and all other local information needed for production companies.  It also catalogues many of the diverse productions which have been filmed in Limerick.

Mayor of the City and County of Limerick Cllr Kieran O’Hanlon said: “The launch of the new website, Film in Limerick shows that the council is serious about Limerick becoming a major player in the film production industry.  This website is the latest in a series of investments made by Limerick City and County Council to help grow the industry.  These include the purchase of the old Dell Building, which has become the site of Troy Studios, and the establishment of a new Production and Digital Skills Academy.  This will help provide future productions with highly skilled locally-based workers.”

The launch of the new website coincides with the Open Day being held at Troy Studios and run by Screen Training Ireland and the Irish Film Board.  More than 600 people will get first-hand experience about how film production works, how the set operates and the myriad of jobs associated with the film industry.

Mike Cantwell, Head of Innovate Limerick said: “Today’s Open Day at Troy Studios is the first significant step in preparing film crews for an international film industry on the west coast of Ireland.  Innovate Limerick has created Film in Limerick which is a shop window for national and international film producers looking for possible locations to shoot in Limerick and the Mid-West Region.  This one-stop shop will provide all the information a film producer needs while showcasing the landscapes, buildings, accommodation and expertise which the region has to offer.”

Siún Ní Raghallaigh, Director of Troy Studios welcomed the new resource: “Troy Studios very much welcomes the launch of the Film in Limerick resource, which has been spearheaded by Innovate Limerick.  This resource will no doubt prove invaluable resource as part of our strategy to grow film production infrastructure in Limerick and the mid-west region. By having Film in Limerick working in conjunction with Troy Studios, it will further enhance our ability to attract film producers to shoot here.”