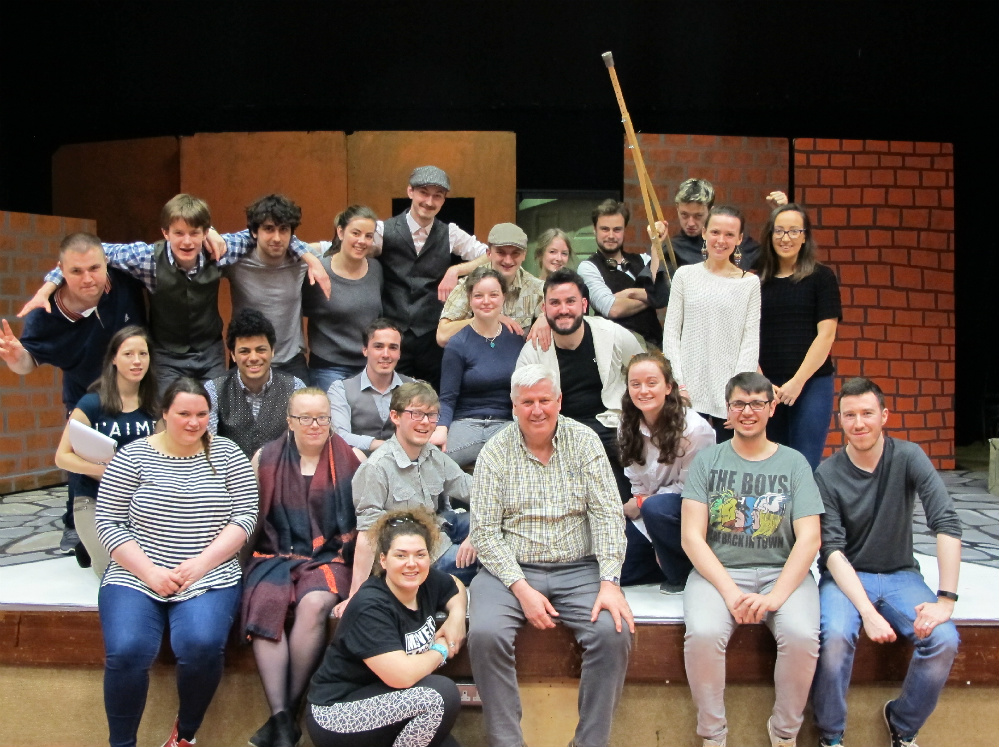 The UL Drama Society Presents Pigtown on March 21, 22, and 23 in the Jonathan Swift Theatre at the University of Limerick.

This Play written by Mike Finn tells a story that brings the audience through Limerick during the 1900s. This hilarious yet heart-wrenching performance directed by Tony Cusack is a theatrical journey through the history of 20th-century Limerick, seen through the eyes of one man, Tommy, played by UL student Tadhg Flynn. Through the eyes of Tommy, Pigtown travels up and down the twentieth-century visiting incidents famous and forgotten, including the Emergency, the ‘Limerick Soviet’ and the Boer War.

With a cast made solely of students, The UL Drama Society Presents Pigtown as never seen before. After contacting Tony Cusack, director, the drama society has been rehearsing non-stop to bring this show-stopping performance to the stage in UL.

Director, Tony Cusack described why he decided to get involved with the production “Pigtown is kind of close to my heart. A friend of mine wrote it, Mike Finn. It tells a story of Limerick through the 20th century with various major events touched along the way through a series of sketches and short stories. I’ve always had an affinity for the play so that’s why I decided to do it in conjunction with the drama group.”

Tony went on to describe some new learning curves he experienced through working with the UL Drama Society. As the University of Limerick has such a variety of students from all over Ireland and even all over the world, Tony came to the realisation that many would not be familiar with the Limerick ways. He commented, “It’s my first time with the UL Drama Society and there’s a lot of talented people here, but a lot of people are from outside Limerick, so I’ve been explaining ‘Limerick-isms’ to them”. With the UL Drama Society Presents Pigtown, it was essential that the students learned to act out these “Limerick-isms” to give as accurate a performance as possible.

Tony went on the describe another learning curve he encountered while working with the students. He added “a lot of the Drama Society were born in the 90s, most of the crew born between ‘94 and 2000 so there’s a lot of explaining the events we touch on through the play, not alone of Limerick but of all aspects of the 20th century. There’s things touched on like JFK visiting through the emergency and the Pope coming.”

Thankfully the cast has gotten their performance perfected now that the date for UL Drama Society Presents Pigtown is edging closer. By performing a Limerick play, the Drama Society are hoping to draw a crowd to their show. Director Tony Cusack emphasised the success that Pigtown has received in previous renditions and how he hopes that the UL Drama Society will receive some of that success. Tony said “I’ve done the play before with Árdscoil Rís Transitions Years about 5 or 6 years ago and we got a great response to it. I know that anytime the play is performed, even outside of Limerick, its drawn huge crowds so I’m hoping that the people of Limerick and the community out here in UL will support it.”

With tickets priced at just €5 for UL students and staff and €10 for non-UL members, this outstanding performance is not one to be missed. The impeccable talent to be seen at UL Drama Society Presents Pigtown is something that won’t go unmissed.

For more information on the University of Limerick click here