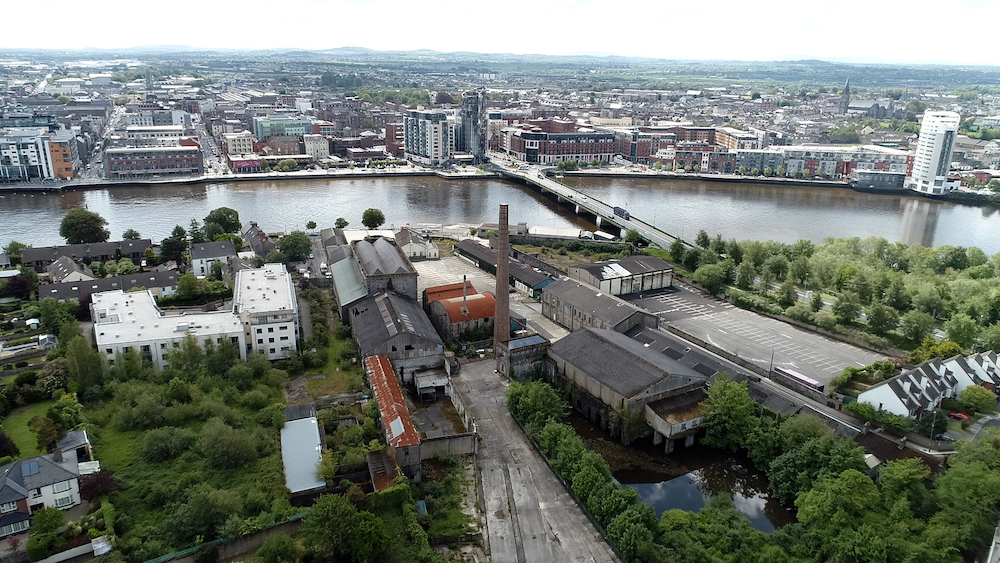 The rejuvenation of the brownfield city centre site will result in focused compact city growth.

The Mayor has led the chorus of welcomes that funding of €116 million is being allocated to Limerick as part of the latest announcement of projects through the government’s Urban Regeneration and Development Fund (URDF).

Limerick City and County Council, working with our local partners, prepared submissions and applied to the Department with four specific projects having to demonstrate a clear and direct linkage between the proposal and the relevant Regional Spatial and Economic Strategy (RSES) and in the case of metropolitan areas the relevant Metropolitan Area Strategic Plan.

These projects submitted by Limerick City and County Council have received funding as part of Call 2 of the URDF. They are:

The development of a world-class waterfront linking the Opera site and the proposed new UL Campus across the river to the Cleeves riverside campus and towards the docklands incorporating major improvements at Arthur’s Quay, riverside flood defences, high quality public realm, a pedestrian bridge from the city to Cleeves and signature buildings. There are three strands to the project.

The proposal represents a unique opportunity to develop a high quality mixed-use development of scale, which will secure the long term transformational and rejuvenation of a brownfield city centre site, which will result in focused compact city growth. This funding will be used to kick-start development on the site, and to restore the protected buildings.

This project is about making positive, innovative and transformational change to revitalise the centre of Limerick City. It is an integrated programme of urban development that will be under pinned by a programme of innovative collaboration with four strands

Develop an innovation campus at ENGINE within the city centre to attract cutting edge companies and start-ups, accelerators and other related entities. This will create a dense cluster of innovators and entrepreneurs collaborating together and will include.

The overall aim of the Urban Regeneration and Development Fund (URDF) is to support more compact and sustainable development, as set out in Project Ireland 2040, through the regeneration and rejuvenation of Ireland’s five cities and other large towns, in line with the objectives of the National Planning Framework (NPF) and National Development Plan (NDP).

Welcoming the announcement, the Mayor of the City and County of Limerick Cllr Michael Collins said: “This is fantastic news for Limerick and it presents us with a unique opportunity to develop high quality mixed-use developments and public spaces of scale in our city centre, creating high quality places for people for living, working and recreation.”

“This investment will secure the transformation and rejuvenation of a many brownfield city centre sites, resulting in the creation of a focused compact city which along with other significant investments such as Project Opera will transform our city into an excellent centre for investment, jobs, sustainability, culture and quality of life.”

Dr Pat Daly, Chief Executive of Limerick City and County Council said: “This URDF grant of €116 million is a fantastic outcome for Limerick and will support delivery of several key projects on strategic city centre sites over the coming years. The delivery of these projects will create thousands of jobs and serve as a catalyst for many more exciting investments both public and private that will help transform the city and the region as set out in our Limerick 2030 plan and confirm Limerick’s status as a very attractive investment location.”

Projects submitted by Limerick City and County Council have received funding of €116 million through the government’s Urban Regeneration and Development Fund.

Vincent Murray, Director of Economic Development at Limerick City and County Council added: “Work has already commenced on planning for most of these projects. It is important that we pay tribute to the staff in the Council and our partner organisations who invested significant time and resources in developing these project submissions and have a vision for modern Limerick City Centre. The submissions were independently adjudicated so to receive this vote of confidence in our projects is very welcome.

Responding to today’s announcement of funding for Limerick projects, David Conway, CEO of Limerick Twenty Thirty, which will develop the Cleeves site, said “that the funding will underpin the innovative development on the northern banks of the River Shannon”. The news, he said, “is the latest in a growing list of positive announcements for Limerick that are injecting real and timely confidence in Limerick.”

Commenting on the total of €116 million being allocated to projects,  Limerick Chamber CEO Dee Ryan said: ”This is very welcome news of significant investment into our city – the World Class Waterfront project will dramatically improve the area around the Shannon in the city centre, featuring public realm works and pedestrian bridges, and it paves the way for private investors to commit to further projects in the area.”

“The green light for a Digital Collaboration centre, an Accelerator centre and a Film Skills Academy is a significant support to companies starting-up and scaling-up in Limerick, while simultaneously breathing energy and vitality into our Georgian Core.

City centre retail and hospitality businesses, who have been worst hit by the pandemic, stand to benefit from the boost to footfall that these projects will bring, and upon completion the improvement to the overall experience and livability of our city centre.”