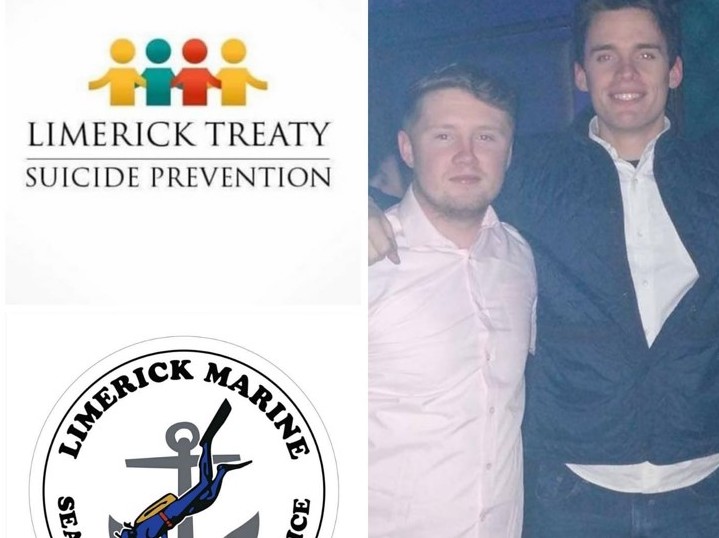 Dylan McMahon and Eimhin Prendergast have decided to partake in a running challenge this weekend to aid two charities – Treaty City Suicide Prevention and Limerick Marine Search and Rescue Service (LMSR). This challenge entails running 4 miles every 4 hours for 48 hours. The challenge begins on Friday, March 5, at 10 am, until Sunday, March 7, at 10 am.

Dylan said, “Eimhin messaged me to express that he was interested in doing the global David Goggin’s fitness 4x4x48 challenge with the aim of helping a greater cause. We decided to pick two local charities and split the total amount between the two.”

Dylan added, “I picked Treaty City Suicide Prevention because I was diagnosed with clinical depression and understand what it feels like to feel alone and helpless. I struggled with mental health on and off throughout the years, and it is crucial to put the message out there that there are people who care and want to help. The Treaty City Suicide Prevention embodies this message when they dedicate their time to patrolling the bridges all hours of the day and night.”

Meet our team members out patrolling the walkways, bridges and banks of the Shannon river tonight.

We will be out until early hours giving support to those we may meet who are distressed or suicidal. #LimerickTreatySuicidePrevention #LTSP #Community #MentalHealth #Talk #Aware pic.twitter.com/Xe8bqhkt6P

Limerick Treaty Suicide Prevention is a volunteer group patrolling the bridges of Limerick City, as well as continuing their usual night-time patrols, between 2 pm and 6 pm each day; members of the group will be there to offer a kind ear to people who are struggling with the world we are living in currently. They will help people in suicidal distress or feel isolated.

“All funds donated to us are vital as we are facilitating both Day and Night patrols. These patrols are vital for the well-being of our community, and we need essential equipment to do this,” a spokesperson for Limerick Treaty Suicide Prevention added.

Eimhin said, “I picked Limerick Marine Search and Rescue Service due to an early experience when undergoing training to become a lifeguard. I experienced first-hand the work that the LMSR teams continually do and the risks they wholeheartedly take to save others. I wanted to play my part and help in whatever way I could.”

LMSR keeps Limerick safe in unpredictable waters. It also holds pontoons along the waters of Limerick, equipped with boats established with donations. As a result, LMSR are incredibly responsive in an emergency call due to their quick accessibility to the water.

Dylan and Eimhin concluded, “We have several local routes planned out, some on the road and some on the grass once it gets more rigid on the legs. We are open and would love to have people join in with us if they’re comfortable doing so.”