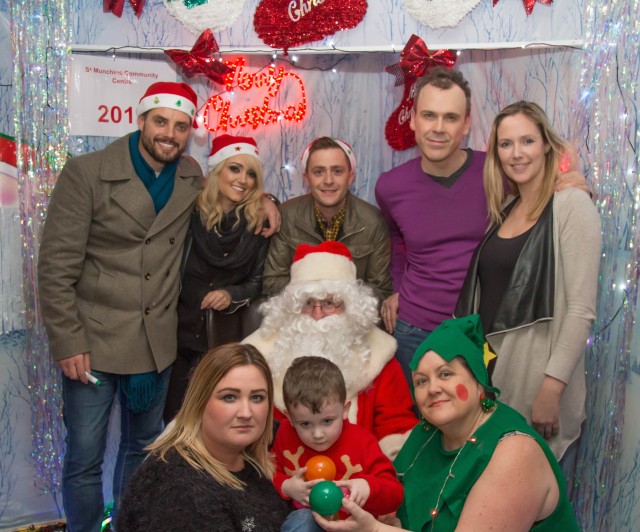 A look back at 2015 – Richards year loving Limerick

A look back at 2015 – Richards year loving Limerick

Last March one of my closest friends, acclaimed Limerick fashion designer, John McNamara, passed away after a short illness, aged 57. John built up a deserved reputation as one of the finest tailors and designers in Ireland.

He was a most talented and creative man who was commissioned to design for Ireland’s first female President, Mary Robinson. What people may not be aware of was his huge involvement with ILoveLimerick.com for over 4 years.

John handled all of our social media and also helped me edit my newspaper column every week. He was such an integral part of our team.

I am a better, stronger, kinder and more honest person having known you. Love you dearly. Always yours, Richard. X

Richard pictured with his beloved parents at LGBT Pride 2011.

I want to pay tribute to one of Limerick’s true gentlemen, my father Eric Lynch who passed away peacefully last March at the University Hospital Limerick surrounded by his entire family as we sang our favourite family songs.

My father and my mother Florence used to own the legendary pub bearing his name on St Joseph’s Street. Many Limerick people have wonderful, nostalgic memories of the pub, with my mother playing the piano and my dad singing songs.

Everywhere I go in Limerick people always ask after my parents. I come from a background steeped in history and I am incredibly proud of my heritage.

My parent’s pub was the first pub in Limerick to have music, the first to get a music licence. I am sure right now he is singing with the angels in heaven. Love you Dad. x

Richard with Mary Kennedy and Celia at the launch

Mary Kennedy, from RTE’s Nationwide and Celia’s close friend, was there on the night to help launch the exhibition.

In her speech, Mary mentioned ‘Celia is a champion of Limerick and Irish design and a wonderful asset to Limerick.”

Richard pictured at Dolans last May.

In May, The Yes Equality campaign team was out in force at the count in UL Arena, conducting tallies as boxes were opened and votes were counted. I spent the day with my crew filming and photographing a very emotional day that will be remembered forever in Irish history as Irish voters decisively voted in favour of marriage equality, making Ireland the first country to do so through the ballot box.

Afterwards we all went to the Kasbah Club at Dolans for the announcement of the National vote. It was like New Years Eve in 1999 as people cried, laughed and held each other. I was in shock. I couldn’t believe it was happening and I burst into tears at the final announcement. I am so incredibly proud of Limerick, of Ireland and of all the people involved in the campaign. One huge step for Ireland, another small step for the world.

In July the Limerick Pride Parade 2015 was held for huge crowds coming out to participate in festivities.

I was thrilled it was such as a success as I put so much work into producing and making the entire days events happen.

There has never been more reason to celebrate Limerick Pride than there has been this year, because of Ireland’s decision to legalise same-sex marriage earlier in May.

The Parade Grand Marshall was Myles Breen, who rode in the back of an open-top car as it travelled the route of the parade.

In October, there were jubilant celebrations in The Strand Hotel as the residents of Castleconnell claimed the top prize in Limerick Going for Gold 2015, which for the first time included the communities across Limerick City and County, featured a prize pool of over €76,000, courtesy of the JP McManus Charitable Foundation.

Castleconnell were named as the overall winner in the Challenge category, receiving a €10,000 prize.

I had the honour of taking on the role of Master of Ceremonies for the event, which raised awareness of environmental issues, got people involved in their own areas and made a physical difference in communities.

In November, the University of Limerick awarded an Honorary Doctor of Science to former Ireland Rugby Captain Paul O’Connell and I had the honour of attending and filming the event.

Dr. Paul O’Connell is the 100th recipient of an Honorary Doctorate from the University of Limerick since 1990.

UL President Professor Don Barry paid tribute to the rugby legend, “Much thought, consideration and deliberation goes into deciding who is worthy – except when it is a real-life super hero, and particularly when his name is Paul O’Connell.”

In November, spirits were high at St Munchin’s Community Centre, as it celebrated its tenth year since opening its doors to the community, with special guests in attendance. JP and Noreen McManus attended the celebrations with daughter Sue-Ann Foley, in a show of support for the centre, and to turn the sod on the new day-care facility that will be built on the grounds.

JP and Noreen McManus attended the celebrations with daughter Sue-Ann Foley, in a show of support for the centre, and to turn the sod on the new day-care facility that will be built on the grounds.

Linda Ledger, St Munchin’s Centre Manager, thanked the McManus family for their continued support over the past decade. See www.stmunchinscommunitycentre.ie.

In December, Keith Duffy will be visiting St Munchin’s Community Centre as part of his work with The Keith Duffy Foundation.

The community centre held a Children with Autism Christmas Grotto with Santa Claus himself meeting and greeting children.

Keith, who is appearing in this year’s UCH Pantomime Sleeping Beauty until January 3 visited the centre from 5pm alongside myself and fellow panto co-stars George McMahon and Leanne Moore.

To find out about Keith’s Foundation visit www.KeithDuffyFoundation.ie.

If anyone wants to keep tabs with what I am up to around Limerick, you can find me on Facebook as Richard Lynch and Twitter @Richanthon. If you have a good news story about Limerick I could share on our site, you can contact me via email at [email protected] Look forward to hearing from you!