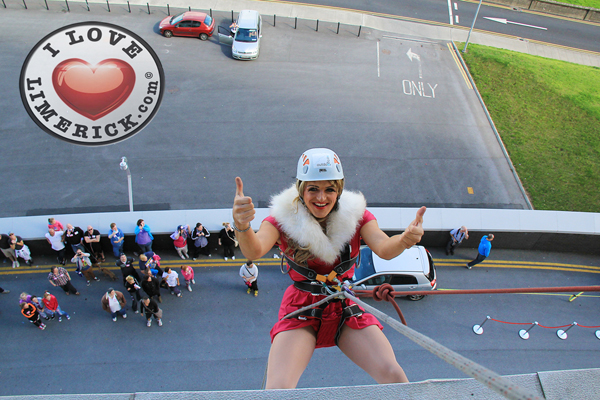 Last year Self Help Africa was the charity that benefited from the fantastic fundraising done by the participants. This year, the Abseil event was open to other clubs & charities including Self Help Africa & Marriagequality.ie. To take part in the abseil, participants paid a €65 registration fee, with the rest of the funds they raised going towards their charity of choice. This was a unique opportunity to scale the most iconic landmark in Limerick city, Thomond Park, the home of Munster Rugby! Moninne Griffith from Marriagequality.ie says, “We are delighted to have amazing supporters like Sharon and Dave Cuddihy (Chairman Limerick Pride) who organised this fundraising event in aid of Marriage Equality as part of the Limerick Pride festival. We are so close to achieving equality for same sex couples, their families and their children and hope to see a referendum on the issue next year. We know Ireland is ready, with public support at 75%, but we need our supporters to help us get this across the line. That is why we are asking everyone who thinks it’s time for marriage equality in Ireland to show their support to this fun event.” Sharon Arseburn became the first drag queen to abseil Thomond Park in history! Also present on the day rugby star Felix Jones who has shown amazing support for the LGBTQ community.

PHOTOS BY Noel Salisid FOR ILOVELIMERICK.COM 2013. ALL RIGHTS RESERVED. STANDARD DISCLAIMER – Sharing of images online by ILoveLimerick.com in no way licences the use of said images without the express Agreement from ILoveLimerick.com.