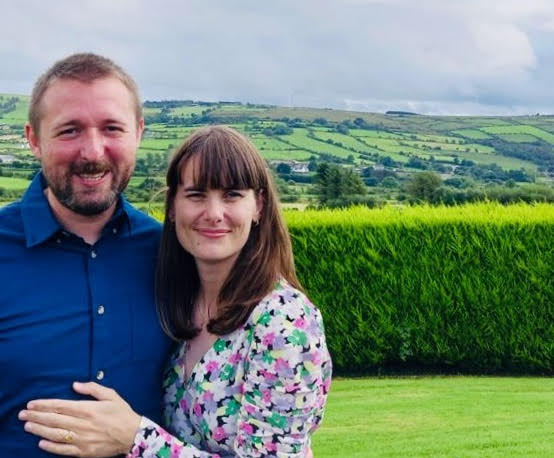 Accommodation Appeal for Afghan Families – Pictured above are Jenny and Liam.

A West Limerick couple are appealing to the people of Limerick to assist in their efforts to rehome two families who have been forced to flee their homes in Afghanistan following the recent Taliban takeover.

Jenny Liston, a native of Athea in Co. Limerick, and her fiancé, Liam Kavanagh, are assisting two families to find accommodation in West Limerick and are appealing for help from local landlords who may have suitable properties to rent. Both families have been granted asylum in Ireland after it was deemed unsafe for them to remain in the country following the collapse of the government there and withdrawal of US and allied forces in August of this year.

Fatima* (32) and Bakar* (36) hope to arrive in Ireland in the coming days having secured a safe passage out of Afghanistan to neighbouring Pakistan following weeks of living in fear for their lives. While Fatima will initially travel to Ireland on her own, her mother, husband and three children, two girls aged 7 and 13 and a boy aged 12, hope to join her in Limerick in the coming weeks. Due to the nature of her work, the mother of three was forced into hiding as Taliban forces took control of the country.

Both Fatima and Bakar, who hopes to resettle in Ireland with his wife, have worked with NGOs in Kabul and parts of rural Afghanistan for over 10 years. In 2016, Jenny’s fiancé, Liam Kavanagh, who works with an Irish international NGO, spent almost a year in Afghanistan where he worked closely with Fatima and Bakar to improve the livelihoods of women and rural farmers suffering from extreme poverty. Since 2016, Jenny and Liam have kept in regular contact with Fatima and Bakar, and have supported them in recent weeks as they fled from their homes in Kabul.

Speaking about the risks posed to Fatima and Bakar, and the Accommodation Appeal for Afghani Families Liam said, “Because of their work supporting women and other vulnerable groups, both Fatima and Bakar have had direct death threats from the Taliban. Fatima, in particular, was deemed extremely high risk, as a woman who has been very vocal on women’s rights issues in the country. Both have sadly been left with no other choice but to flee from their beloved home country as a result of Taliban rule.”

Since both families have been accepted onto the Irish Government’s refugee programme, Jenny and Liam have committed to helping the families resettle in Ireland and have set up a fundraising page to help the families with the initial costs associated with resettling in Limerick. They hope to reach their fundraising goal of €10,000 and hope to see the families find suitable homes in West Limerick.
“When we heard that the families could come to Ireland, I knew I wanted them to move near my home place of Athea in West Limerick”, says Jenny, who works as Roma Programme Coordinator with Pavee Point. “It would provide them with lots of support and a strong community around them at a very difficult time. Resettling in Ireland is a huge change for these families and it is our hope that they will be able to settle in West Limerick where they will feel welcome and cared for.”

She added, “As part of their resettlement in Limerick, myself and Liam are hoping to find suitable accommodation for both families, ideally in Newcastle West or in the surrounding area. We would very much appeal to local landlords who may have a one or two bed house or apartment for rent for Bakar and his wife. For Fatima, we are seeking somewhere temporary for now and then we hope to find a family home for rent that can accommodate Fatima, her husband and three young children, as well as her mother.”

Reflecting on the current situation in Afghanistan, Liam said, “Nobody expected the situation to change so quickly and so drastically. Sadly, Fatima, Bakar, and their families no longer have a future in Afghanistan under the current Taliban regime. We hope that they will be given a brighter future here in Ireland.”

Jenny added, “we want to thank the people of West Limerick, particularly family and friends who have been so helpful and supportive in recent weeks. It is so fantastic to see people coming together to help our friends when they are in desperate need. I know it will mean the world to Fatima, Bakar and their families.”

*Names have been changed to protect the families’ identities as placing personal information on social media could pose a risk to them or their families in Afghanistan.

Related Topics:Accommodation Appeal
Up Next