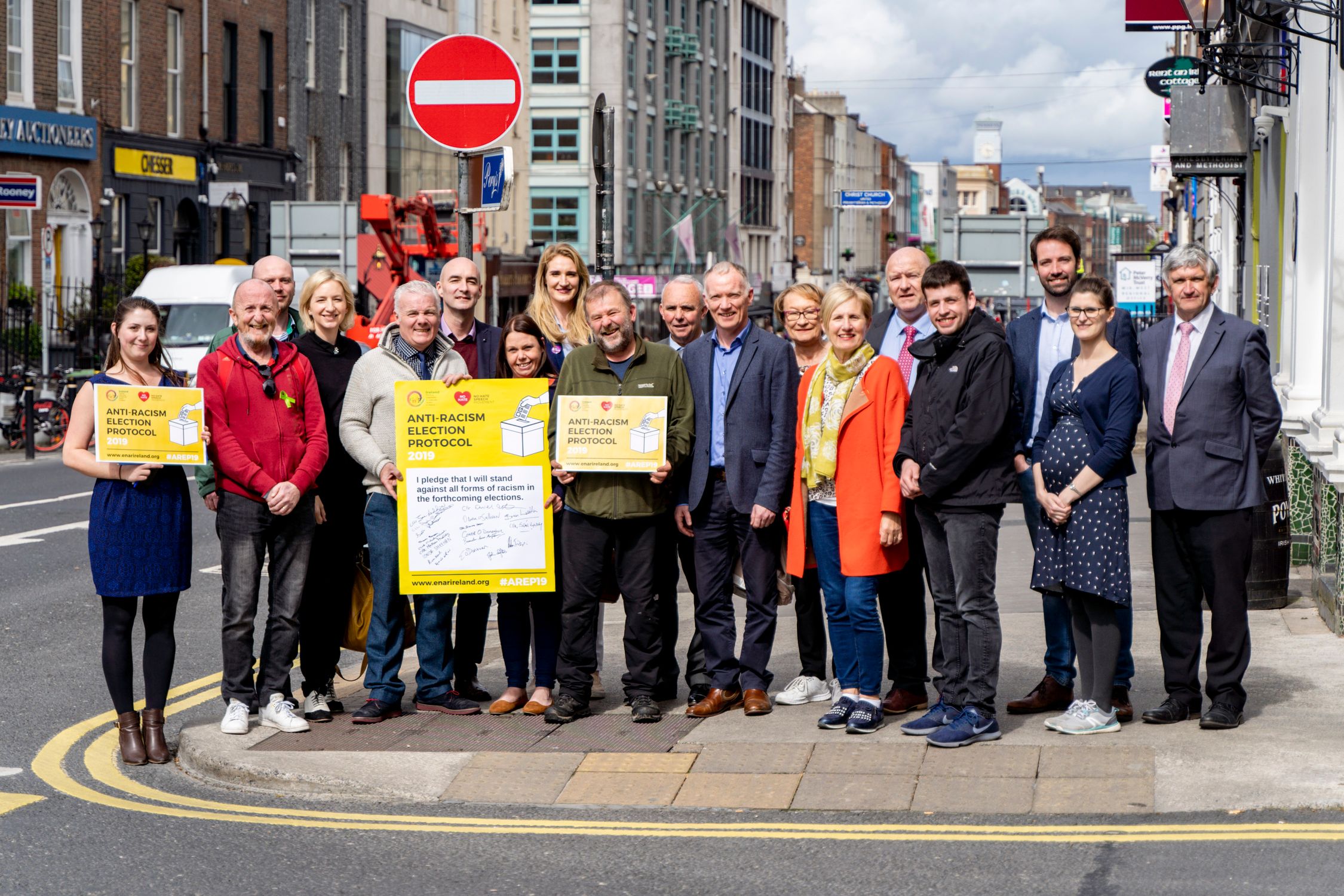 On Wednesday, May 1, 24 local and European election candidates gathered at the Doras office in Limerick City centre to publicly denounce racism by signing the Anti-Racism Election Protocol 2019.

Seán McSweeney, Doras CEO said: “The elimination of racism from the political discourse is something that Doras takes very seriously, and we would like to thank all of the candidates who made the effort today to show the public that they share these values. ”

The Anti-Racism Election Protocol, established in 2001, asks parties and candidates to agree to use appropriate language and images in campaign materials and to condemn materials that may incite hatred or express prejudice.  The protocol was recently re-launched by the European Network Against Racism Ireland (ENAR Ireland), of which Doras is a member.

Shane O’Curry, Director ENAR Ireland said: “The Election Protocol has played an important role in elections since 2001, ensuring that elections are conducted in an unbiased and non-discriminatory manner. In light of the global rise in racism and xenophobia, we hope that the protocol will help to keep this year’s elections free from racist discourse and hold Irish politicians to a higher standard.”

Doras continues to encourage both Local and European Election candidates to sign the Protocol to renew their commitment to anti-racism prior to this year’s elections on May 24.

McSweeney added: “Following the recent misinformed and discriminatory comments made by Peter Casey against residents of Direct Provision, it is essential that parties, candidates and voters alike not only refrain from using this type of language but openly condemn it. We urge all candidates for both Local and European Elections, including Mr Casey himself, to sign and adhere to this Protocol during their campaigns.”

The Anti-Racism Election Protocol 2019 was re-launched this year by ENAR Ireland on the International Day for the Elimination of Racial Discrimination.

Launches of the protocol in 2019 have also been held in Galway and Wicklow, where candidates were given the chance to publicly sign and endorse the protocol. A number of political parties have signed the protocol for the upcoming elections including Fine Gael, Sinn Féin, Fianna Fail, Labour Party, The Social Democrats, Green Party, People Before Profit, Independents for Change, Solidarity, Éirígí, The Workers’ Party and Aontú. Full list of endorsers can be found here.

Full list of candidates who attended the event and signed the protocol:

Information about the protocol and how to endorse can be found here. For more information contact Monika Fallon, Communications and Coordination Officer at [email protected]