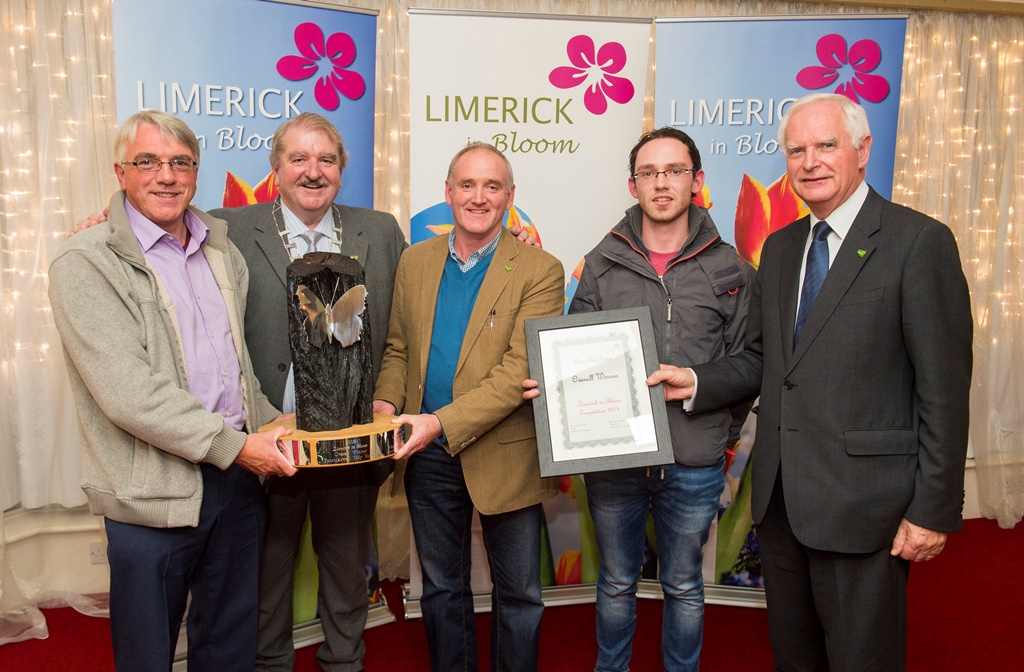 For the second year running, the West Limerick village of Athea has been named the overall winner of the Limerick In Bloom competition.

Forty-four other community groups throughout County Limerick were honoured for their participation in the annual competition, now in its seventh year, at an awards ceremony held last night (Thursday, 23 October 2014) at the Woodlands House Hotel in Adare.

Limerick City and County Council, in conjunction with sponsor JP McManus Foundation, once again hosted this year’s competition which serves as a motivational mechanism for small local-based groups throughout the County to enhance the visual impact of their settlements by means of flower, tree and shrub planting.

Cllr. Kevin Sheahan, Cathaoirleach of Limerick City and County Council also congratulated the Limerick In Bloom participants for making the competition “a real celebration of community spirit, teamwork and awareness of the natural environment.”

“While Limerick City and County Council is responsible for the delivery of a range of public services, it also has a responsibility to assist residents associations, businesses and voluntary groups to enhancing their local communities.  Limerick In Bloom is one such vehicle for achieving this and we are delighted to officially recognise those communities and groups that have committed themselves to improving the visual appearance of their localities,” added the Cathaoirleach.

Gerry Boland of the JP Mc Manus Foundation also praised the Limerick In Bloom Competition and its participants for “making an invaluable contribution to the overall appearance of their local communities.”

He continued: “We are delighted to recognise and endorse the efforts of local communities in working towards the improvement of the beauty and natural environment of Limerick as a whole.”

Limerick In Bloom adjudication took place during the summer and considered such factors as colour, size, variety, location and appropriateness of the various planting schemes along with the management of litter.   Competition categories are based on population size with a first, second and third prize in each category of €1000, €500 and €300 respectively. The Overall Winner receives an additional €500.

Hospital Tidy Towns was named overall winner of Category 3, for towns and villages with a population in excess of 700, with Kilmallock Tidy Towns and Castleconnell Tidy Towns finishing in Second and Third Place respectively.

Meanwhile, Limerick In Bloom participants who entered in the 2014 National Tidy Towns Competition were also officially recognised at the awards ceremony. Prizes were awarded to the best performing towns and villages in each of the 2014 Tidy Towns Competition. Four awards of €1,000 were presented to groups in the following categories: Highest Overall Score (Adare); Tidiness & Litter Control (Feenagh); Sustainable Waste & Resource Management (Kilmallock); Landscaping (Ardpatrick); Meanwhile two awards of €500 were presented as follows: Wildlife and Natural Amenities (Broadford); Community Involvement and Planning (Galbally).

Those in attendance were also treated to a guest appearance by the Limerick Senior Hurling Manager TJ Ryan who took to the stage to lend his support for Team Limerick Clean-up (TLC), the JP McManus Benevolant Fund recent  collaboration with Limerick City and County Council to combat litter.

Sponsored by the JP McManus Benevolent Fund, the TLC initiative will be co-ordinated by the Council and it is hoped that as many people as possible throughout Limerick will come together on Good Friday (April 3rd, 2015) to collect and recycle litter.  Other TLC Ambassadors include Munster Rugby’s Paul O Connell.

“I am delighted to lend my support to the Team Limerick Clean Up. Participation in this initiative only requires a few hours of time on Good Friday and getting involved promises to be great fun as well as very worthwhile. Volunteers can sign up easily on www.teamlimerickcleanup.ie or simply call the helpline on 061 496200 so remember the date and help make a difference.”

Further information relating to ‘Limerick In Bloom’ is available from the Environment Department of Limerick City and County Council on 061-496214.

Photos by Diarmuid Greene for Fushion Shooters. All Rights Reserved.

MUCH LOVED TEDDY BEARS SOUGHT FOR THE BLUE BOX