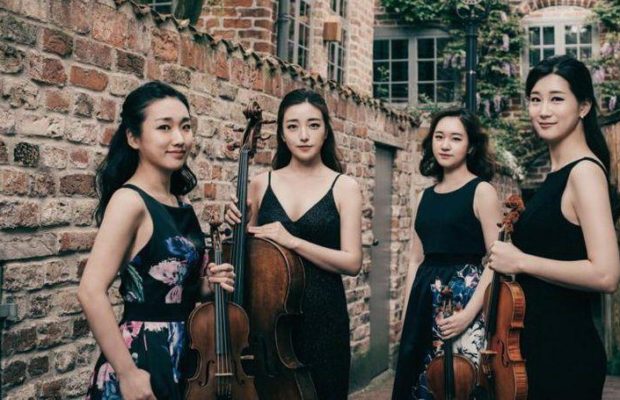 Castleconnell Concert Series 2019: It promises to be a night to remember, with classical music being played throughout the night. Pictured: The Esmé Quartet.

There is a distinctly international flavour for this year’s Castleconnell Concert Series at All Saints Church being later this month.

One of Britain’s foremost pianists, Leon McCawley begins the four-concert series on Tuesday, August 27, marking the start of the 14th edition of the Castleconnell Autumn Concert Series.

McCawley has been praised for the purity of his lyrical and heartfelt playing. Notable recitals in past seasons include: London Piano Series at Wigmore Hall, International Piano Series at London’s Southbank Centre, New York’s Lincoln Center, Hong Kong Arts Festival and the Phillips Collection in Washington DC.

Sheila Deegan, Culture and Arts Officer with Limerick City and County Council said, “In the picturesque village of Castleconnell, this year the focus for the programme is international, with Leon McCawley (piano), Esme Quartet, winners of the Wigmore Hall International String Quartet competition, Camerata Kilkenny and Swedish Soprano Maria Keohane and in partnership with Music Network Ben Johnson and Sean Shibe.”

Leon McCawley is one of the acts lined up for the night.

“It is exciting to bring this exceptional line-up of performers to our audience for Castleconnell, through working in partnership with the Arts Council. Take an evening and come along to the first in the series with Leon McCawley on Tuesday 27 August, explore the village and enjoy a walk by the river Shannon,” she added.

The other concerts in the series include the Esmé Quartet on Tuesday, September 24. Formed in 2016, the Esmé Quartet has rapidly gained a reputation as a chamber ensemble of exceptional achievement and promise. In spring 2018 the quartet won First Prize and the Alan Bradley Mozart, Bram Eldering Beethoven, the ProQuartet and the Esterházy Foundation Prizes at the prestigious Wigmore Hall International String Quartet Competition in London, and in autumn 2018 it became HSBC Laureate of the Académie du Festival d’Aix.

The triennial Wigmore Hall International String Quartet Competition is widely recognised as one of the world’s most prestigious quartet competitions and offers the winning ensemble outstanding opportunities for career development. Their concert includes pieces from Frank Bridge, Beethoven and Mendelssohn.

On Tuesday, October 15, World-renowned Swedish soprano Maria Keohane joins the Irish early music ensemble Camerata Kilkenny for a programme of exquisite arias by J.S. Bach coupled with traditional chorales for the solo female voice from the Dalarna region of Sweden.

The final concert on Tuesday, November 26 music lovers will delight in seeing young Scottish guitarist Sean Shibe who has taken the world by storm ever since winning the BBC New Generation award in 2012, he is a musician with intelligence and wisdom far beyond his years. Equally at home in whatever genre he turns his hand to, he has never set boundaries on the scope of his musical exploration. Pair him up with Ben Johnson, one of the busiest young tenors in the chamber music and opera worlds, a multi-award-winning recitalist and owner of one of the most beguiling voices around, and that’s a world-class duo right there. They bring intensity and new clarity to Bach, Giuliani and Walton, and adventure and risk to contemporary work. Music Network has commissioned a new work by Brian Bolger for this tour, the first Irish outing for this duo.

Ticket for the Castleconnell 2019 Autumn Concerts Series programme at the All Saints’ Church is €15 available at the door prior to each performance, or €10 concession/ groups of five and over.