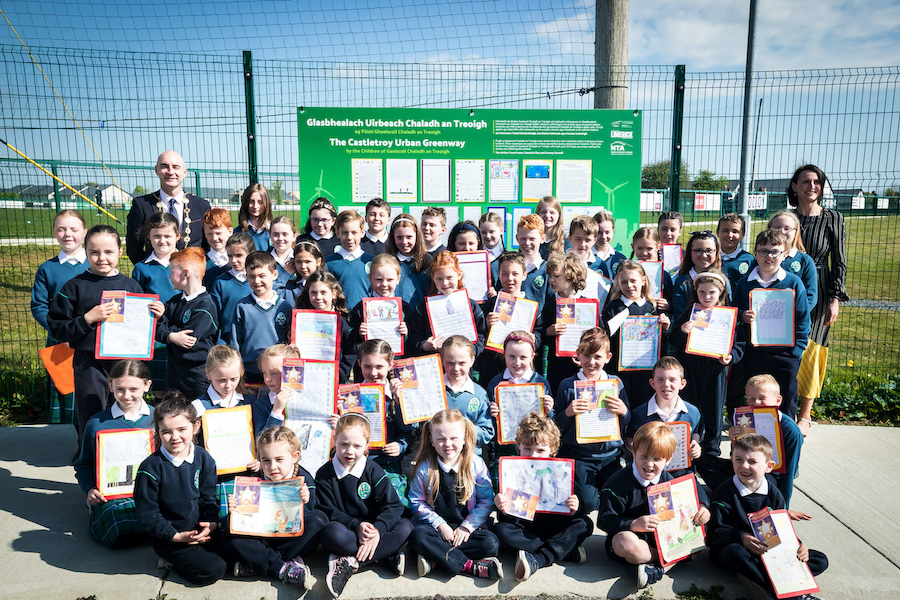 Children at Gaelscoil Chaladh an Treoigh in Castletroy have created a collection of Childrens Active Travel stories and artwork that captures what the new Castletroy Urban Greenway means to them.

Príomhoide at the Gaelscoil, Frankie Uí Fhrainclín, was so impressed with what the pupils produced she shared their work with the Active Travel team at Limerick City and County Council. Those stories and drawings have now gone on public display along the greenway for members of the local community to enjoy.

The Childrens Active Travel stories include those of third class pupil Daithí who writes: “The Greenway is very good because it has paths for cycling and walking. The Greenway can bring you to two different schools. It is much safer.”

Fifth class pupil Faye writes: “It is safer for children instead of walking beside the main road. It is also making an impact on pollution because there is less traffic on the road. I love the greenway.”

Mayor of the City and County of Limerick, Cllr Daniel Butler said: “It is great to see the level of creativity that has gone in to producing all of this work. The children from Gaelscoil Chaladh an Treoigh are proof of how the right infrastructure can lead to healthier, safer travel to and from school.”

The main north-south spine provides connectivity between Castletroy College and Gaelscoil Chaladh an Treoigh. The Greenway, which extends to approximately. 1.3km, includes a western link to Castletroy Town Centre and an eastern link to the nearby residential area of Walkers Road.

The Active Travel project has been funded by the National Transport Authority and managed and delivered by Limerick City and County Council.

For more info on the Castletroy Urban Greenway, go HERE