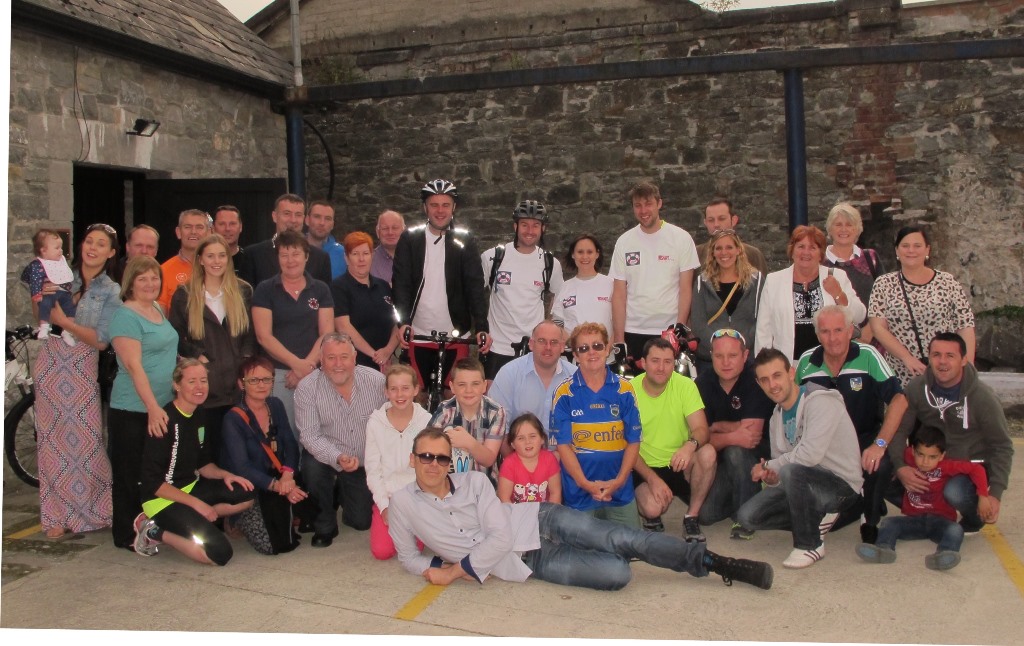 Corbett Suicide Patrol Cycle – A local Limerick suicide prevention charity will benefit this weekend from a gruelling 225-mile charity cycle to raise funds for their frontline work in the city.

CSPP suicide prevention Limerick volunteers go on local patrols every night in a bid to stop people from taking their own lives by offering on-the-spot help and support.

Andrew Totten, Peter Wishart and Chaz Haston will spend two days pedaling from their homes in Co Antrim to Limerick to raise money to help the charity – for which Peter’s brother-in-law is vice-chair.

Scientific equipment firm Wishart Group is primary sponsor of the charity cycle, and is also providing the support van carrying supplies to help the trio on their trip.

This Friday [September 5th] the trio will bike the 100 miles down from Belfast to Trim, Co Meath, where they will stay overnight before going another 125 miles to Limerick.

Volunteers for the group patrol between the four bridges of Limerick city at night time, keeping watch for anyone who might be in distress.  Over recent months CSPP volunteers have deterred a number of people who were contemplating taking their own lives.

CSPP is a Limerick-based charity, and Peter has chosen to support it because of the family connection and its brilliant work taking on such a difficult and emotional problem as suicide.

He said: “I’ve never done anything like this cycle, and I’ve no doubt it’ll be very tough, but I’m looking forward to it because it’s for such an important cause.

“We are trying to raise awareness of the amazing work the volunteers do, and also generate as much income for CSPP as possible, because it relies entirely on the goodwill of personal and business donations.

“Any sponsors as a one-off would be welcome, but we would also love any local businesses in Limerick to come forward if they feel they could help with the group on a continuing basis.”

Thanks to the generosity of a local business donating some bikes the team can cover ground further and faster when they are out at night.

A number of the volunteers will also use these bikes to join Pete, Andy and Chaz as they arrive in Limerick for the finale of their 225 mile cycle.

Other equipment worn or carried by CSPP patrollers includes a floatation suit, a personal floatation device (PFD), throw bag and first aid kit – which they will also use to help anyone who has fallen or suffered a physical assault when out.

The basic kit costs around €500, a substantial cost that does not include training costs. Anyone going on patrol must first complete a two-day applied suicide intervention skills training (ASIST) course, while they also receive first-aid instruction from paramedics.

CSPP was started a few years ago by Limerick man Trevor Corbett, who sadly went on to take his own life, and currently has 16 volunteers.

No-one involved with the charity receives any money, all give up their time for free, and so is asking for money so it can keep going with the work it already does, and hopefully improve provision.

The cycle race are asking people to donate directly via http://www.cspplimerick.org/make-a-donation.html so that all funds raised will go directly to this worthy cause.

Louraine Tomlinson, CSPP secretary, said: “We are incredibly grateful for all their effort that is being put into this charity cycle.

“Hopefully it can do something to raise the profile of what we do and how important it is, and also generate us some much-needed funds. Any and all donations will be received with our most sincere thanks.”

You can find more on Corbett Suicide Prevention Patrol here!