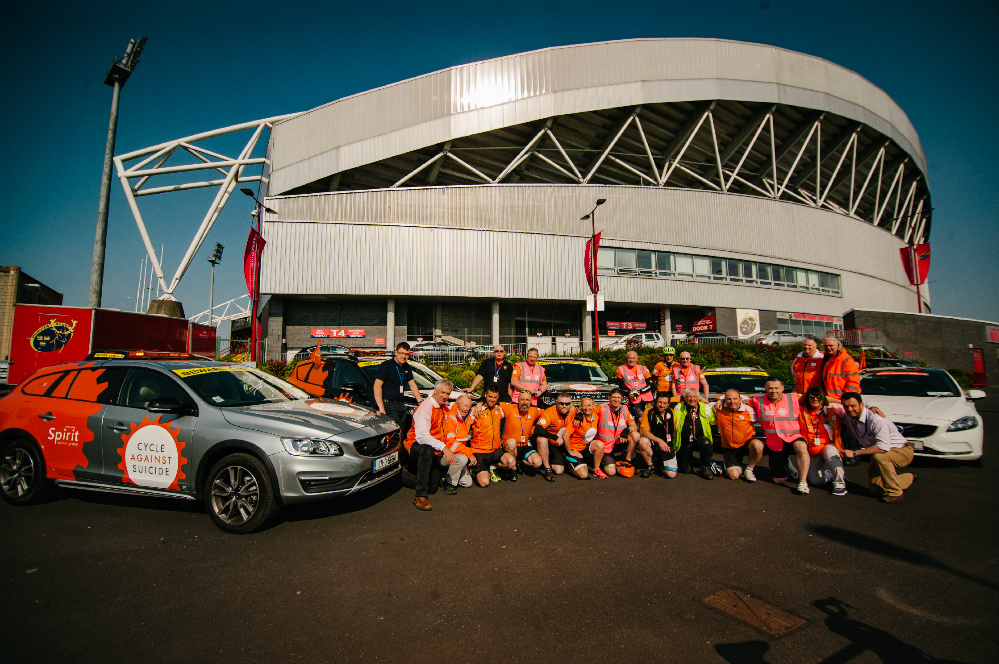 The Cycle Against Suicide 2017 Team pictured outside Thomond Park.

Wednesday, May 4 marked the eleventh day of the national Cycle Against Suicide 2017 campaign and saw the cycle set off from Limerick city. The Cyclists finished their journey through Clare on Tuesday evening before reaching Ardscoil Rís at 6 pm. The team of cyclists were invited to Limerick’s pride and joy, Thomond Park, where they met the Deputy Lord Mayor of Limerick, Noel Gleeson, who was there to wish them well on their journey. Wednesday’s stage at began at Thomond Park at 10.30 am and made it’s way to John The Baptist school in Hospital in the afternoon.

The message that the Cycle Against Suicide 2017 event is bringing to the island of Ireland is that “It is ok to not feel ok and it’s absolutely ok to ask for help”. The stops along the route and the welcome from local communities such as those in Limerick have enabled the event, which is now in its fifth year, to spread this message across the island of Ireland.

Cycle Against Suicide was founded by Irish entrepreneur, Jim Breen as a result of an appearance on RTÉ’S documentary, The Secret Millionaire. The programme inspired Jim to continue to use his skills and influences to help raise awareness of mental health in Ireland and signpost people in need, to the considerable supports available for suicide prevention in Ireland. Cycle against suicide is a voluntary organisation that aims to raise awareness of this prevalent issue of Suicide, offer reassurance that ‘it’s ok not to feel ok; and it’s absolutely ok to ask for help’, and direct people to where this critical help is available both locally and across the island of Ireland.

Cycle against suicide focus on a community-driven approach in all their activities. They work towards more cohesion between, and awareness of, the various organisations working to prevent suicide, and provide bereavement support, in Ireland.

More details about the event can be found here

or by contacting Conor Crowley on [email protected]