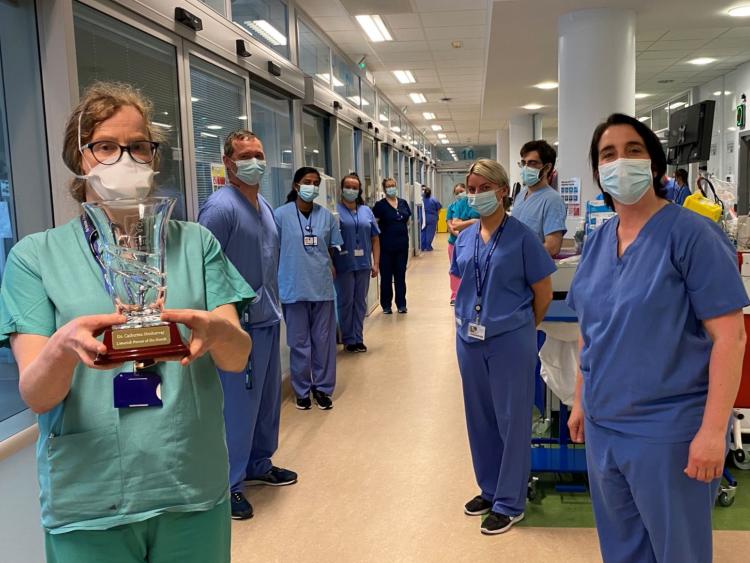 At a virtual ceremony, which was live-streamed from the Clayton Hotel this Thursday evening, Dr Motherway was named the overall winner for her Trojan work on the frontline since the Covid-19 pandemic hit in March 2020.

Dr Motherway, who was the monthly winner for May 2020, was a calm, reassuring and authoritative voice on the impact of the pandemic when society was facing great uncertainty and was fearful of what might happen.

"This is an emotional moment."
Congratulations Dr Catherine Motherway on winning the 'Limerick Person of the Year 2020' at tonight's virtual awards event.

Speaking via Zoom after being announced as the winner she said: “There is a little bit of the Oh my God. For our staff – both in Limerick and around the country – who have worked very hard for this past year and for our patients I thank the panel. For those, we have saved and for those, we have lost I would think of those tonight and, in particular, I would think of two of my colleagues who we have lost in the last year so this is an emotional moment.”

Dr Motherway added: “It has been a hard year for everybody but I think we have done well as a country and today we have a lot of hope and the vaccination programme really brings a lot of hope to us all and we will all have one big party when we can and we will remember those we have lost properly in time and we will go forward and recover and hopefully help the rest of the work to get over this.”

Celebrating its 20th year and sponsored by The Limerick Leader, Southern Marketing Design and Media and the Clayton Hotel, and supported by Limerick City and County Council, the Limerick Person of the Year Award was set up to honour the achievements and success of local people at home and abroad.

Taoiseach Micheál Martin delivered a video message at the beginning of the virtual ceremony while fashion queen Celia Holman-Lee and Mick Dolan of Dolan’s Warehouse also made an appearance from their homes.

The MC for the 90-minute event was broadcaster Lorcan Murray and the awards ceremony featured a special pre-recorded performance of The Cranberries ‘Dreams’ by Soprano Sinead O’Brien who was accompanied by harpist, Sinead Ryan.

Munster and Ireland rugby star and champion of Limerick, CJ Stander, who recently announced his retirement and who is returning to his native South Africa was also presented with a special award of Honorary Limerickman.

Mayor of the City and County of Limerick Cllr Michael Collins was one of the first people to congratulate Dr Catherine Motherway on her Limerick Person of the Year award.

“Dr Motherway truly deserves to be Limerick Person of the Year for 2020. Her dedication and commitment to caring for those affected by Covid. Her calmness under pressure allowed us to be confident that our doctors and nurses were doing their utmost in difficult conditions to treat our loved ones,” he said.

Dr Motherway was a calm, reassuring and authoritative voice on the impact of the pandemic

“Her clear and concise messages when speaking about the virus has been so reassuring especially when the crisis first hit as it meant everyone could understand it and get the real message from an expert,” he added.

Speaking at the awards ceremony, Donn O’Sullivan, Editor of the Limerick Leader commented: “The year 2020 will never be forgotten, for all the wrong reasons, but the last 12 months have shown the strength and resilience of Limerick people like never before. The Person of the Year awards may not be held in the ‘traditional’ sense, but the virtual event is a brilliant showcase of the talent, bravery and success which makes Limerick and its people what they are today.”

forward to each year.”

Traditionally, the Limerick Person of the Year ceremony is held in the Clayton Hotel with each of the monthly winners being honoured before the overall winner is announced.

This year, the ceremony was held virtually, however, the process for selecting the overall winner remained the same with the Mayor of the City and County of Limerick, Cllr Michael Collins, Dr Pat Daly, Chief Executive of Limerick City and County Council and Donn O’Sullivan, Editor of the Limerick Leader choosing the winner.

For other stories on Limerick Person of the Year go HERE

Related Topics:Dr Catherine Motherwaylimerick person of the year
Up Next