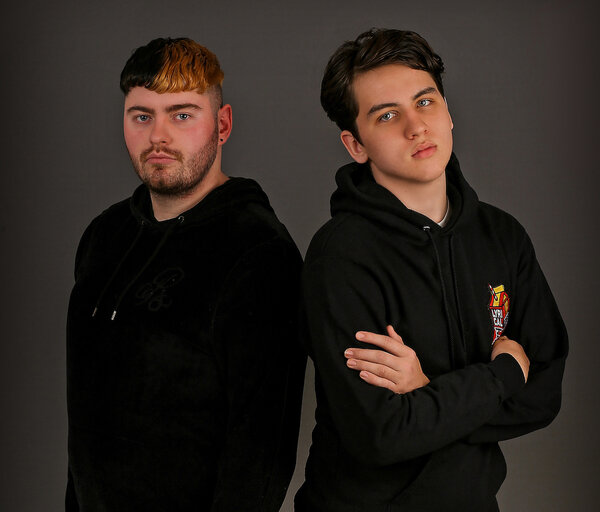 Ger O Hanlon has teamed up with Luke Culhane pictured above for their new single ‘Prisoner’. Picture: Dermot Culhane.

Limerick music producer Luke Culhane has teamed up with Ger O Hanlon, a singer/songwriter from Cork to release a brand-new single called “Prisoner’ all about life during Covid-19 which is out Saturday, October 24.

17-year-old Luke continues to reach new heights, Luke is an expert when it comes to creating content and is an avid filmmaker. In 2016, at the young age of 13, Luke created a global video campaign against bullying called #CreateNoHate and since then has continued to expand his creative talents. He was awarded Limerick Person of the Year in 2016 and was dubbed ‘Young Person of the Year’ by a prominent French newspaper, Mon Quotidien. This young man’s talent and drive know no bounds. There is no goal that Luke sets himself that he cannot achieve. Luke has made quite a name for himself around Limerick, having won awards for his films including an RTÉ Factual Award for his film ‘What’s Your Story?’ His interests have recently turned to music production and, like many of his other projects, he has thrown himself in head first and really emerged into being the best music producer he can be.

GER decided it would be best to further his music career by attending the University of Limerick to study music in 2017. While attending college GER busked on the streets of Limerick and in 2019, GER performed at Limerick Pride Festival. GER has been highly influenced by singers including Mariah Carey, Christina Aguilera, and Whitney Houston. In 2018, GER gained the online attention of British singer Jessie J for his vocal ability and his five-octave range.

In June 2020, GER released his debut single “To Be with Him” as an anthem for pride month and it debuted at No. 1 on the Irish iTunes Top 100 singles and the Irish iTunes Pop singles and received many great reviews from music blogs and radio stations around Ireland. Ger O Hanlon

GER is now back with his third single “Prisoner (Feat. Luke Culhane)” that will be released on Saturday, October 24. The song was inspired by the current COVID-19 pandemic. The song is produced by Luke and this is their message to the Irish people and to the Government to keep strong and take more responsibility as the new level five lockdown comes into place once again.

Luke said, “We are a voice for young people and all people in Ireland. Ger really wanted to have our voice heard and we think this song best represents the frustrations we are all feeling right now going through this pandemic.”

We sat down with Gerard O’Hanlon to talk to him about their new single and his work with Luke.  Ger O Hanlon

I’ve always loved music from a very young age. I would put on little performances for my parents in our kitchen at home; it was something that came very naturally to me. I started to go to music lessons when I was 5 years old. My first instrument was the tin whistle and violin and overtime we discovered I could sing. I think the first time I sang live was my first communion and I remember being so nervous that I would mess up. At around the age of 14 I then started to attend singing lessons in Voiceworks Studios in Cork and started to post singing videos on Facebook. I could see the voice lessons were really improving my voice and started to enter a few singing competitions. I was always told I should do music after school but, to be honest, I didn’t think I was good enough at the time. But over time I started to build more confidence and decided to study music in college. I attended the University of Limerick for 2 years studying Performing Arts and that is how I came to Limerick. My Dad is originally from Dooradoyle in Limerick so I knew the place pretty well before I moved up. I got so many performing opportunities in Limerick from performing at Dolans, the Limerick Gay Pride Festival and Limericks live 95fm and performing for the president of UL. In 2019 I then decided the best move for me was to go to the music called BIMM in Dublin that James Bay and George Ezra had attended. Since moving to Dublin that really helped me make new music contacts. I released my first single “To Be With Him” in June 2020 and it debuted at No.1 on the Irish iTunes Charts, which was a dream come true. And in September I released my 2nd single “Suffocating” that also went to No.1 which was absolutely bizarre and I’ve been writing so much since!! When I say music is my life …I really mean it!

I have been highly influenced by so many artists over the years! To name a few would be Miley Cyrus, Jessie J, Christina Aguilera, Ariana Grande, Billie Eilish, And Patti Labelle, but my biggest inspiration is Mariah Carey.

Mariah Carey is literally the reason I went into music professionally. I heard Mariah first when I was 13 and it was her Grammy performance of Vision Of Love and I was just star struck at her voice and her songwriting ability and I have been a loyal fan since that day! I’m a lamb for life! But I’m also so inspired by the people I meet every day and my parents. Inspiration comes from everything around me.

I would say myself my style is very R&B pop like the 90’s Divas with a modern element to them!

I’ve been told I have a very similar sound to Sam Smith or George Micheal which is a huge compliment!  Pop is definitely where I shine at the moment but I am open to trying new genres and styles all the time!

For me, I can’t force creativity. I let lyrics come to me. I like to write about real things that have happened to me or how I’m feeling at the moment and I won’t filter what I say either because otherwise, it will feel like I’m lying to myself if I do. I usually start with lyrics and then fit a melody to those lyrics and make little alterations if needed and I’ll send a demo to the producer and that’s how it all begins. Some songs take longer than others because we always get more ideas that may sound cool. I love the process of creating more than I do singing. Songwriting for me is so important. It’s real and can be so vulnerable. The best thing about creating is when someone else can relate to your music. It’s a very powerful moment.

I think the biggest challenge for me is not conforming to the normality of what a pop star should look like. I won’t lie, in a big guy that’s LGBT who came from foster care. I don’t have abs like Shawn Mendez and I can’t dance like Jennifer Lopez, but I have a voice and a story to tell and that’s really what it should be about. In the last few years, the industry is changing to accept more artists like myself which is amazing. Progress is slow but it’s getting there.

My biggest advice is to be bold. Say what’s on your mind. Be real and honest in your music. Work hard at your craft and don’t let anyone tell you that you’re not good enough because I used to feel like that for years. PROVE THEM WRONG.

And do not feel you have to change who you are to get into this industry. Stand your ground and keep going because the industry is changing and our time is coming.

I could sit here all day and tell you everything amazing about this guy! To sum it up in 3 words ….Genius, dedicated and passionate.

Luke works extremely hard and will go above and beyond for you. I came to Luke with a song last Wednesday and we had the whole song finished by Sunday. He is so easy to work with and is extremely dedicated to making you sound your best. It was an absolute pleasure to work with him and I can’t wait to see what future projects we work on together!

Over the last 7 months of lockdown, it really showed me a new side to the people of Ireland and our government. I’m not one to get political and usually stay away from all of that, but to be honest I just couldn’t stay silent any further. This song is a message to the Irish government and its people to do better. People need to take more responsibility for keeping everyone safe. It’s been an extremely tough time but we need to keep going and trying our best. This song also asks the government to take a look at some of their guidelines and to take extreme consideration in what they said so they don’t contradict themselves. For example one of the lyrics in the song is, “200 in a shop, still not allowed, 6 in a house what’s that about”. The rules need to start making sense if there is ever going to be progress.

Hopefully, in the next 5 years, I will have an album or two out. I’ll also hopefully be living in L. A or London furthering my music career after I receive my degree in college. I actually don’t know what’s going to happen in the next few years but hopefully, it will be achieving happiness above everything else and longevity in my career.

I think my favourite thing about Limerick is the new people I meet every day. There is something very wholesome and loving about the limerick people. I can’t put my finger on it but when you experience it you’ll know what I mean! I miss living in Limerick so hopefully, I can head down soon again after the virus has gone!

Buy to ‘Prisoner’ on iTunes HERE

To listen to ‘Prisoner’ on Spotify go HERE