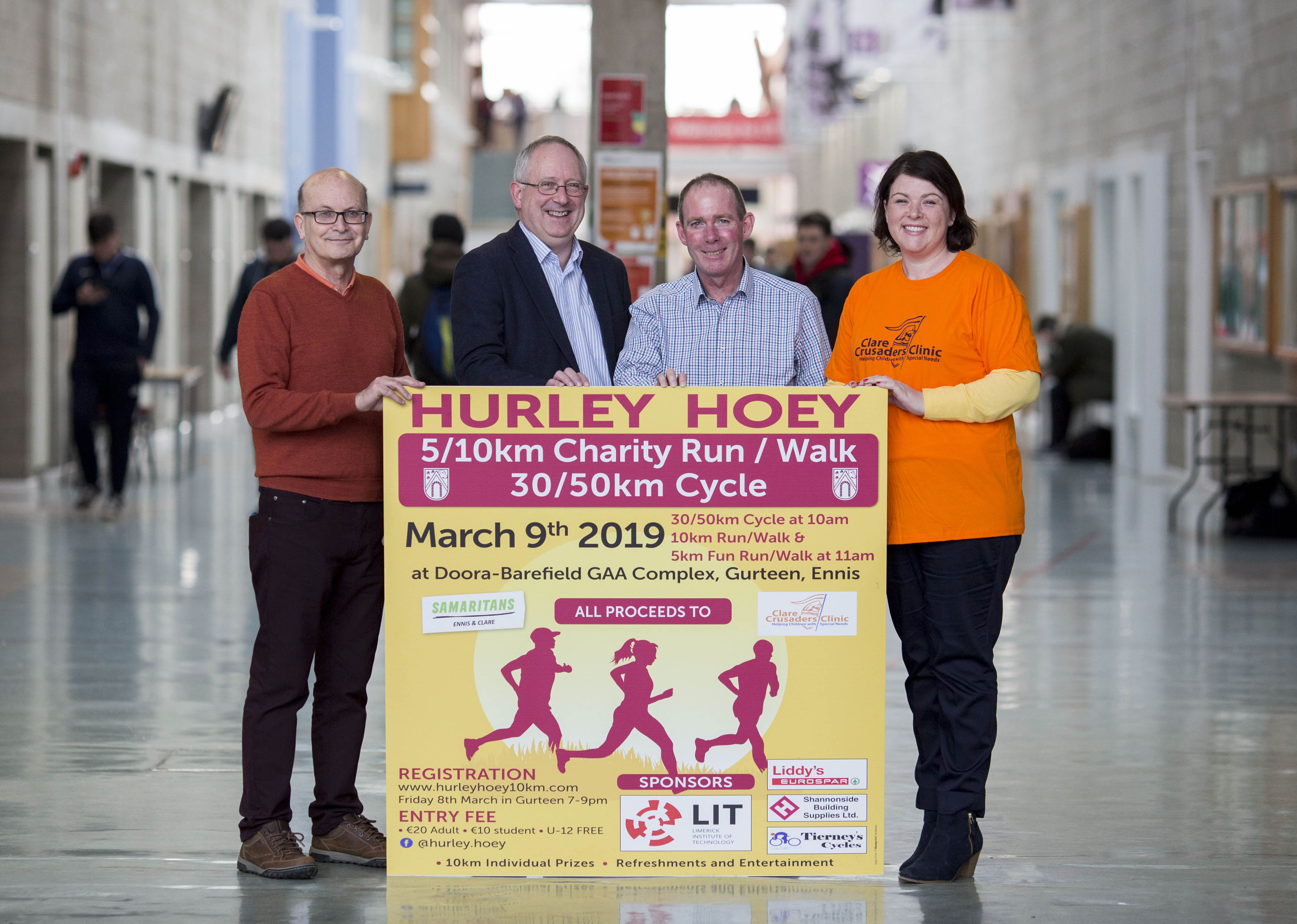 The launch of the 7th and final Hurley-Hoey Memorial Run/Walk/Cycle in aid of Clare Crusaders and Clare Samaritans took place on Friday at Limerick Institute of Technology, Moylish Campus.

The community event, which has also found favour with athletes all over Ireland, was set up in 2012 in memory of well-known Doora Barefield sportspeople – Eilish Hurley and Ger Hoey. This year the Hurley-Hoey Memorial Run/Walk/Cycle will take place on Saturday, March 9, 2019, in Gurteen, Doora, Ennis and will include a 5K fun run/walk for the first time. Participants are invited to register at primoevents.com to walk, run, or cycle in memory of their own loved ones on March 9.

To date more than €92,000 has been raised for local charities through this local event which has a strong international flavour. Over the last number of years, a Hurley-Hoey Memorial Event has also taken place in Sydney, Australia and London, allowing ex-Pats to get involved in this Clare originated event.

The Hurley-Hoey Run/Walk/Cycle is open to all participants over 16 years of age. The 50K and 30K cycle will commence at 10 am, with the 10K and 5K run/walk starting at 11 am from Gurteen.

“The aim of the Hurley-Hoey Memorial Run/Walk/Cycle is to give runners, walkers and cyclists the opportunity to participate in an event in memory of their own loved ones. It is hoped that the event will also leave a lasting positive legacy in the community, county and region, much like the impact Eilish and Ger had in their all too short lives,” said John Hoey, Chairman of the Hurley-Hoey Memorial Event.

“The huge turn out and goodwill towards the last six Hurley-Hoey events would suggest it has succeeded in achieving these goals, and we have no doubt that the seventh and final event won’t disappoint.”

“The continued success of the event is due in no small part to the generosity of our sponsors and the army of volunteers who have worked tirelessly over the last seven years. We would like to sincerely thank all of those who gave so generously of their time and sponsorship,” added Mr Hoey.

“LIT is delighted to support the Hurley-Hoey Memorial Run/Walk/Cycle, an event that promotes community, health and mental wellbeing. We would like to pay tribute to Eilish and Ger’s families and friends, the local community and all those who ensure this has been such an enjoyable and successful event,” said Jimmy Browne, Vice President of LIT.

All funds raised from this year’s Hurley-Hoey Memorial Run/Walk/Cycle will go to local charities, namely the Clare Crusaders and Clare Samaritans. Last year alone the event raised €11,000 which was divided equally between the Clare Alzheimer Society and Clare Suicide Bereavement Support.

Eilish Hurley passed away after an illness on 27th of July, 2004, two weeks on from her 30th birthday. Although still very young at the time of her passing, she had packed a whole lot into her 30 years.

From Larchill, she travelled extensively in Europe as well as in Australia and New Zealand, taking a year out in Australia where she worked in Sydney and Melbourne. She graduated from NUIG Galway in mechanical engineering and subsequently worked as a mechanical engineer in Volex (Mayo), SCI (Cork) and Medtronic (Galway). A keen sportswoman, she played football and camogie at all levels with St. Joseph’s, Doora-Barefield, as well as camogie with NUIG. She ran both track and cross-country with Marian Athletics Club in Ennis and also represented Doora-Barefield in the community games.

The late Ger Hoey who passed away suddenly on the 3rd February 2009 was regarded as someone who gave so much to others, both young and old alike. He was a great motivator and leader both on and off the field.

Wherever he went in his banking career he immersed himself in the local sporting communities both as a player and mentor.

For more information on the Hurley-Hoey Memorial Run/Walk/Cycle and to register for the event, click here