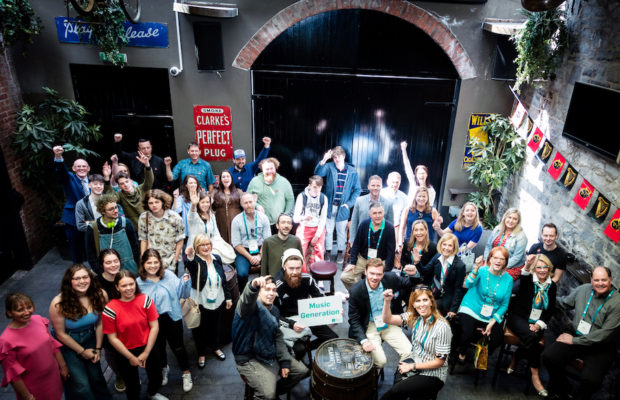 Guests at The Ireland Funds Conference 2018 with musicians and staff of Music Generation Limerick City and LCETB. Picture: Keith Wiseman. 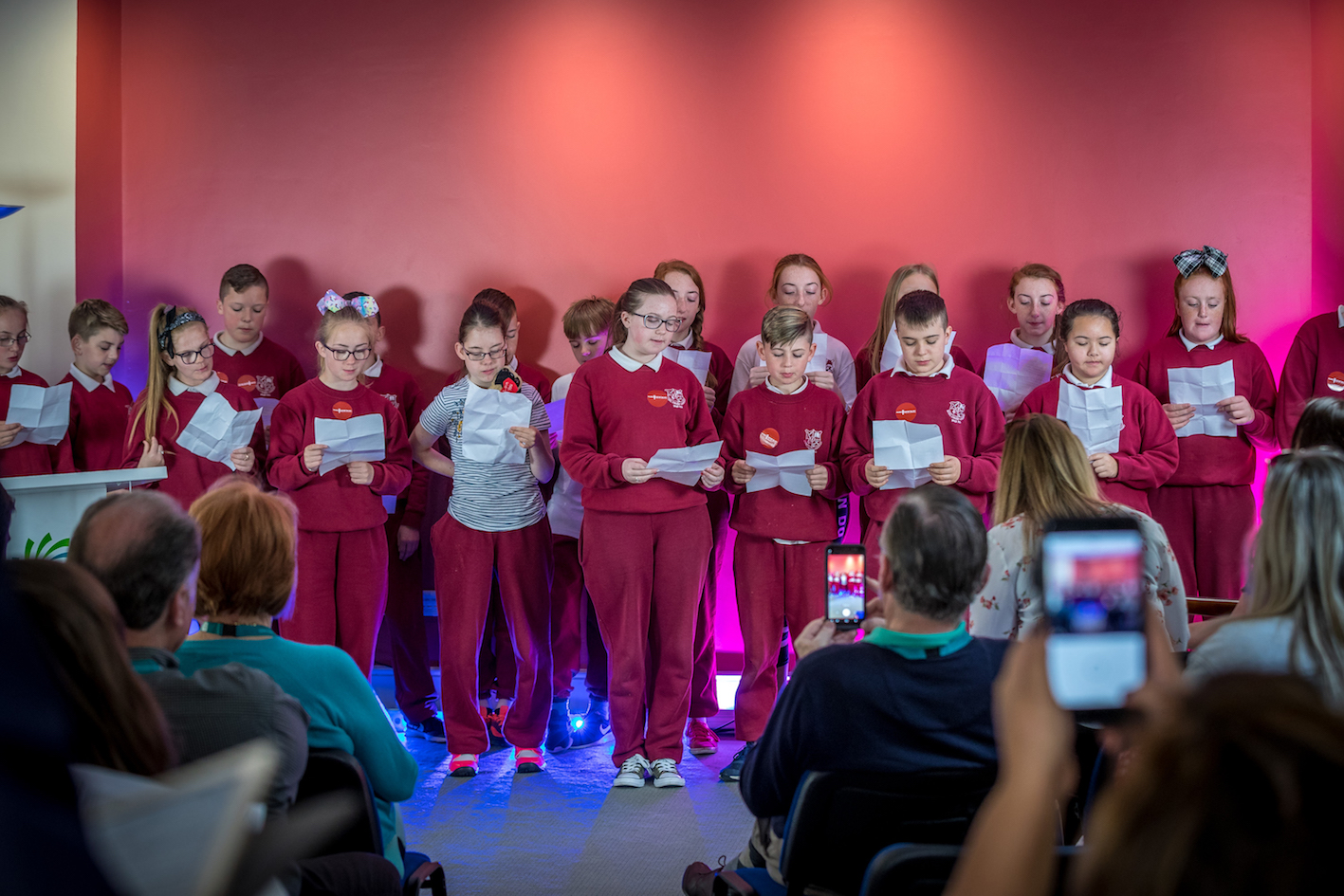 On Thursday, June 21st Music Generation Limerick City welcomed international delegates of The Ireland Funds Conference 2018 for a special visit to its Creative Centre, Cecil Street. The Ireland Funds is a global philanthropic network and one of Music Generation’s principle national funders. On Thursday, members of the network had an opportunity to witness first-hand the extraordinary impact of their philanthropic support as they took a tour of the Limerick City Creative Centre, met with some of the young musicians involved, and enjoyed an electric showcase of original music by some of the city’s rising stars.

Delegates were welcomed to the Centre with music by sixth class students from Corpus Christi National School, Moyross, who performed their own original song. They were greeted by George O’Callaghan (Chief Executive, Limerick and Clare Education and Training Board (LCETB)) and Paul Patton (Director of Further Education and Training, LCETB and Chair, Music Generation Limerick City) who commented on the pioneering approach to partnership that enabled the realisation of the MGLC vision:

‘As lead partner of Music Generation Limerick City, we at LCETB are so proud of the programme which has already achieved so much for so many of our City’s children and young people. None of this great work would have been possible without the dedication of our partners, including The Ireland Funds whose philanthropic seed-funding allowed us to establish MGLC in 2013. The philanthropic support of The Ireland Funds and U2 during MGLC’s first three years has also enabled us to generate the local investment that will ensure the programme’s sustainability long-term. I’d like to acknowledge Limerick City and County Council, Limerick School of Music, Limerick Youth Service, UL, the JP McManus Charitable Foundation and schools throughout the city who, together with the Department of Education and Skills, now provide the ongoing resources to create access to this transformative programme for Limerick’s next generation.’

The Ireland Funds’ delegates then commenced their tour of the Creative Centre, guided through the building by members of the MGLC musician/tutor team. The visitors had an opportunity to explore the work taking place in various rehearsal, production and recording spaces, and to chat with the young musicians about their experiences of creating and performing music. It was a powerful moment for The Ireland Funds visitors to connect with the tangible results of their philanthropy as they heard about the role music has played in the young musicians’ lives.

Guests were then led to J. Flannery’s where they were treated to live performances by MGLC musicians past and present. The line-up featured four-piece PowPig (who took to the stage just ahead of their appearance at the Body & Soul Festival this weekend), experimental art-pop collective Valley and rapper Krome from the ‘Limerick New Cipher’. They were joined by recent MGLC graduates, Island trio SameD4ence, who spoke on the day about the part that Music Generation has played in their performing and recording careers to date:

‘Music Gen to us was a stepping stone, an opening to a whole different world because where we were from there was no ‘joining groups’ unless it was violence. There was no community centre, there was nothing like that. So when we met the lads at Music Gen and saw that people are coming together to create music, and they like it – they actually love it – and they’re asking if we want to come back and record stuff and you’re given those opportunities, that’s beautiful. That’s everything for someone who has nothing.’

National Director of Music Generation, Rosaleen Molloy, acknowledged the significant contribution of the young musicians and their tutors to the cultural fabric of Limerick City:

‘I’d like to congratulate these extraordinary young artists on their superb performances today and to acknowledge their commitment to developing their far-reaching musical potential, together with the MGLC tutor team. The vibrancy and creativity of their music-making is nothing short of inspiring. I think it’s safe to say that Limerick’s long history of musical excellence will continue for many years to come! I would also like to express our deep gratitude to all our partners, U2, The Ireland Funds, the Department of Education and Skills and Local Music Education Partnerships – for their ongoing support to the Music Generation programme nationally, and for playing such a powerful role in making music happen for the children and young people of Limerick City.’

The performers at yesterday’s event represented just a handful of the young musicians involved with MGLC’s diverse programmes and initiatives year-round. The Creative Centre programmes, which include sessions in song-writing, production, band skills, voice and instrumental tuition, are all run by a team comprising many of Limerick’s most exciting performers. They include members of Windings, the Rusangano Family and Naïve Ted among others. All programmes at the MGLC Creative Centre are made available free of charge to participants.