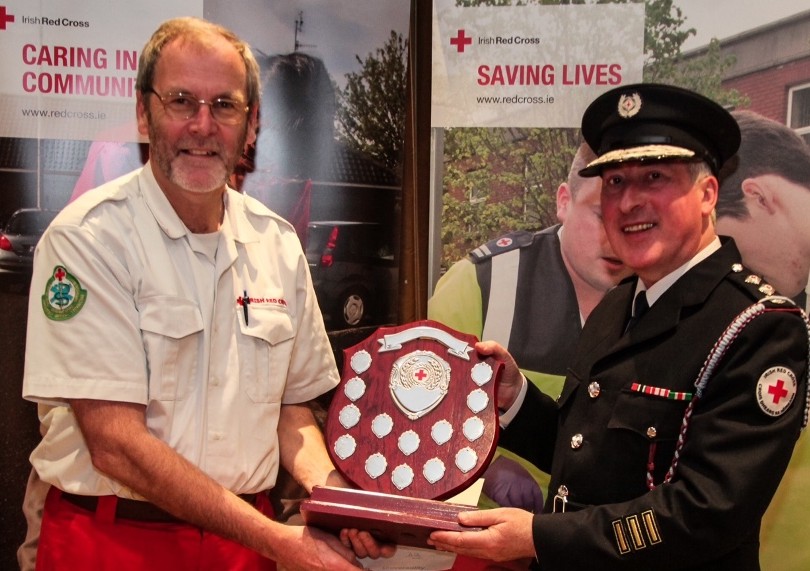 The Irish Red Cross recognised the work of its local volunteers at a special awards  ceremony in Limerick Tuesday 29 April which was attended by over 70 members of the organisation from across Limerick City and County.

The range of awards included gold, silver and bronze lapel pins, representing 40, 70, and 100 hours annual voluntary service, respectively, with special commemorative certificates presented to volunteers who had given over 200 hours service in 2014. Denis Bates, a member of the Limerick Unit, received the award for the highest number of hours contributed in 2014 – an impressive 488 hours.

The ceremony specially highlighted a number of individual volunteers who had made extraordinary contributions during the year, with a surprise presentation being made to Dr. Andrew Kelly, from Limerick in appreciation of over 30 years’ commitment to the Irish Red Cross locally.

Among the recipients was Niall Boland, from Murroe, who received the Member of the Year award for his outstanding commitment to event first aid cover, fundraising and training.

Praising the great work of the local Irish Red Cross volunteers, Mayor of Limerick City and County, Cllr. Kevin Sheahan said: “The Limerick Branch of the Irish Red Cross has made a difference to the lives of generations of Limerick men, women and children.” The Mayor also surprised the audience by inviting the members of the Irish Red Cross in Limerick to attend a Civic Reception in their honour, which he will host at County Hall in the coming weeks. This unexpected gesture was warmly welcomed and greeted with a round of applause from all of the volunteers and guests present.

National Director of Units for the Irish Red Cross Anthony Lawlor said: “Tonight we recognise that Irish Red Cross volunteers contributed over 10,500 volunteer hours to cultural, sporting and humanitarian activities in Limerick City and County during 2014. This represents a huge commitment on behalf of our volunteers, who give up their own time freely and without reward, and it is important that we say thank you to them.” He added that “Limerick volunteers are held in very high regard by the Irish Red Cross for the contributions they make to the development of the organisation nationally, in key areas such as first aid training and clinical audit.”