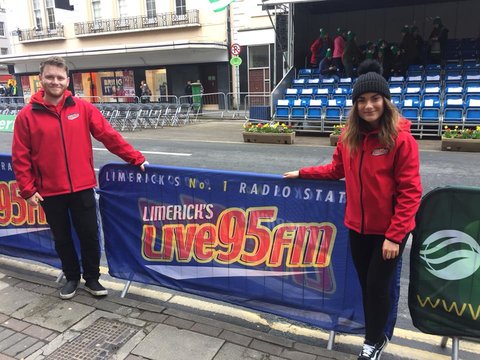 Shadows Ciaran McNamara and Aine McInerney ahead of the St Patrick’s Day Parade this year. JNLR radio listenership reveals over 60% of Limerick listeners tune-in to Live 95fm every week.

Limerick’s Live 95FM is again the most listened to radio station in Limerick City and County it was recently revealed by the JNLR radio listenership. The popularity of the radio station has grown in the locality as 64% or 100,000 Limerick people tune-in to Limerick’s Live 95FM weekly, according to the latest Ipsos/MRBI JNLR radio listenership figures published this week, covering the 12 months to the end of March 2018.

These JNLR listenership results reflect a busy few months for Limerick’s Live 95FM. The station celebrated its 20th birthday in November and renewed its 10-year license from the Broadcasting Authority of Ireland also. The radio station received a Silver IMRO National Radio Award for their news coverage and listeners raised over 84,000 euro for ill and vulnerable Limerick children. 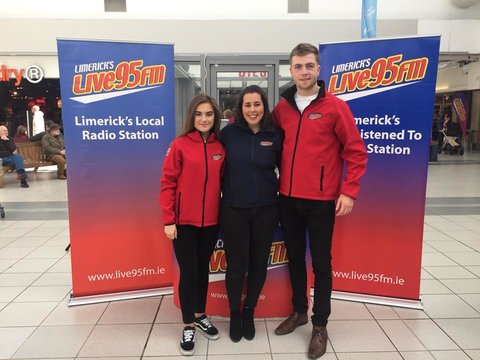 Shadows Aine McInerney and Ruaidhri Ó Conail with Nadia at a Live95FM Road show in the Crescent.

Station Director of Live 95FM, Joe Nash said, “We are pleased to have maintained our position as the most listened to radio station in Limerick. The power of radio, in general, is obvious from this survey with 85% of Limerick people tuning in to a radio station every day. We are honored to play our part and serve the people of Limerick – they are at the forefront of everything we do on a daily basis.”

“I also want to sincerely thank the team on the air and behind the scenes here at the radio station, whose ability and hard work continue to deliver a service that the listeners of Limerick tune-in to, in significant numbers and thanks are also due to our loyal advertisers, for their continuing support,” he added.

Live 95FM has been busy since the start of 2018, giving away 4 sun holidays in January and launching its media partnership with the Bon Secours Great Limerick Run. The station teamed up again with JP McManus and Paul O’Connell for Team Limerick Clean Up 4 on Good Friday, which saw 18,000 people take part in picking up litter across the city and county. The station will be providing lots of coverage of Riverfest over the May Bank Holiday weekend, both on the air and through its social media.

Live95FM listeners should also stay tuned as some exciting surprises are coming up over the summer months.

Limerick’s Live 95FM’s schedule includes Breakfast with Mark and Catriona, the three-hour Limerick Today Show with Joe Nash, Afternoons with Declan Copues, the Live Drive with Gary Connor and Total Access with JP Dillon. The schedule, as always, delivers up-to-the-minute Limerick news and sport and Limerick’s best music mix, too. The station can also be followed on Facebook, Twitter and at live95fm.ie.