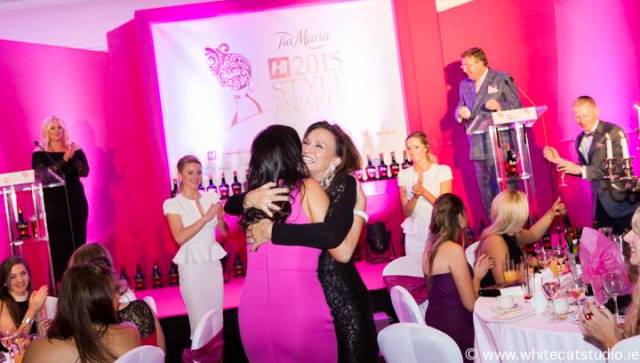 Winner of Hi Magazine’s Most Stylish Woman 2015 being hugged by her life long friend Celia Holman Lee who picked up the Woman of the Year award on the night. Photo by White Cat Studio.

All round fashion guru and television personality Celia Holman Lee won the coveted Woman of the Year Award and congratulations for Limerick’s favourite fashionista poured in on Twitter.

Sarah Ormston of Adare Manor collected the award for Hi’s Most Stylish Hotel 2015 and the very stylish Neisha Leahy of Catwalk hair and beauty on Thomas Street also took home an award in the newcomer category.

Celia Holman Lee was thrilled with the success on the night, she said: “There was great excitement with Limerick people picking up a host of awards. I hope everyone in Limerick will come out and support us for celebrating Christmas in Limerick – The City of Fashion 2015 which kicks off on Monday November 23 with Design and Style at  Limerick Craft Hub which is the home of unique and local Irish style.”

Limerick prepares to be the fashion capital of Ireland this Christmas by donning the ‘City of Fashion 2015’ tag.

‘Celebrating Christmas in Limerick – The City of Fashion 2015’  which will feature a mix of live fashion events, style, hair and make-up demonstrations, and a series of in-store events across Limerick City from the 23rd to the 27th November.

The launch of LIT’s International Fashion Incubator Limerick (IFIL) by Minister for Education Jan O’Sullivan is set to stimulate employment in Limerick in the exciting sector and link the city centre into the international fashion industry.

The launch was a key element of the official opening of the refurbished Merriman House on Lock Quay, a new Centre of Excellence in Fashion Design that builds on the international reputation of LSAD.