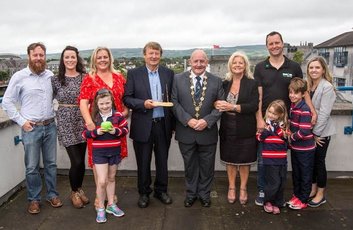 Limerick author Sean Curtin, ex-columnist for the Limerick Leader for 43 years was yesterday honoured with a Mayoral Reception at City Hall, Merchants Quay accompanied by his family and friends, Sean was honoured by outgoing Mayor of Limerick, Kieran O’Hanlon.

Limerick, A Stroll Down Memory Lane started with Sean Curtin’s fascination with all things Limerick. Sean started collecting photographs of Limerick through the years for over 30 years and started his archive as far back as the 80s, realising at an early stage that Limerick was changing as a city and many of the Iconic buildings of the 50s and 60s were now gone.

Sean went about keeping the memories of the streets and ‘lanes’ of Limerick alive. Many read descriptions of Limerick back then but until now there was no pictorial record as such.

Since he started collecting photographs for the series of books he has collected more than 1, 500 photographs which may have otherwise never seen the light of day again.

“The momentum just continues to gather pace”, said Limerick author Sean, Curtin adding that while the initial publications were of photographs from his own private collection, the majority of the last few issues have been submitted from readers, friends and neighbours.

“There is an endless stream coming through my door, in fact, the majority featured in recent years were from families and individuals who left our shores many decades ago. The most interesting aspect from my perspective is researching and enlarging captions with further detail, where possible. If some names are missing from photographs, or are incomplete, there is a legion of ‘oldies’ in my circle that are likely to be able to fill in the gaps. It is my policy to provide a detailed background with every picture.

Limerick people have a fascination for past times, especially photographs with a more historical background. In one book by Limerick author Sean Curtin, for example, there is illustrated coverage of a major fire that killed three people on William Street, in 1913. These are not just books of old photographs, they delve into Limerick’s past and provides a gentle reminder of old place names and lane ways long swept away by the winds of social change.”

The Mayor of Limerick City and County Kieran O’Hanlon present Sean Curtin and his wife Margie with a gift at the reception.
Picture: Sean Curtin True Media

Speaking about his father’s Mayoral Reception, Sean Curtin who founded his own production company True Media, said “It was an honour and privilege to have a mayoral reception hosted by Mayor Kieran O’Hanlon. The mayor said that Sean’s books will be a Stroll down memory lane for generations to come and that he hopes the series continues for many more years”.

Added Mayor Kieran O’ Hanlon, “Sean is up there with some of our most noted historians and his Stroll Down Memory Lane is one of the new discoveries and old enchantment.”

For more on Limerick, A stroll down memory lane click here