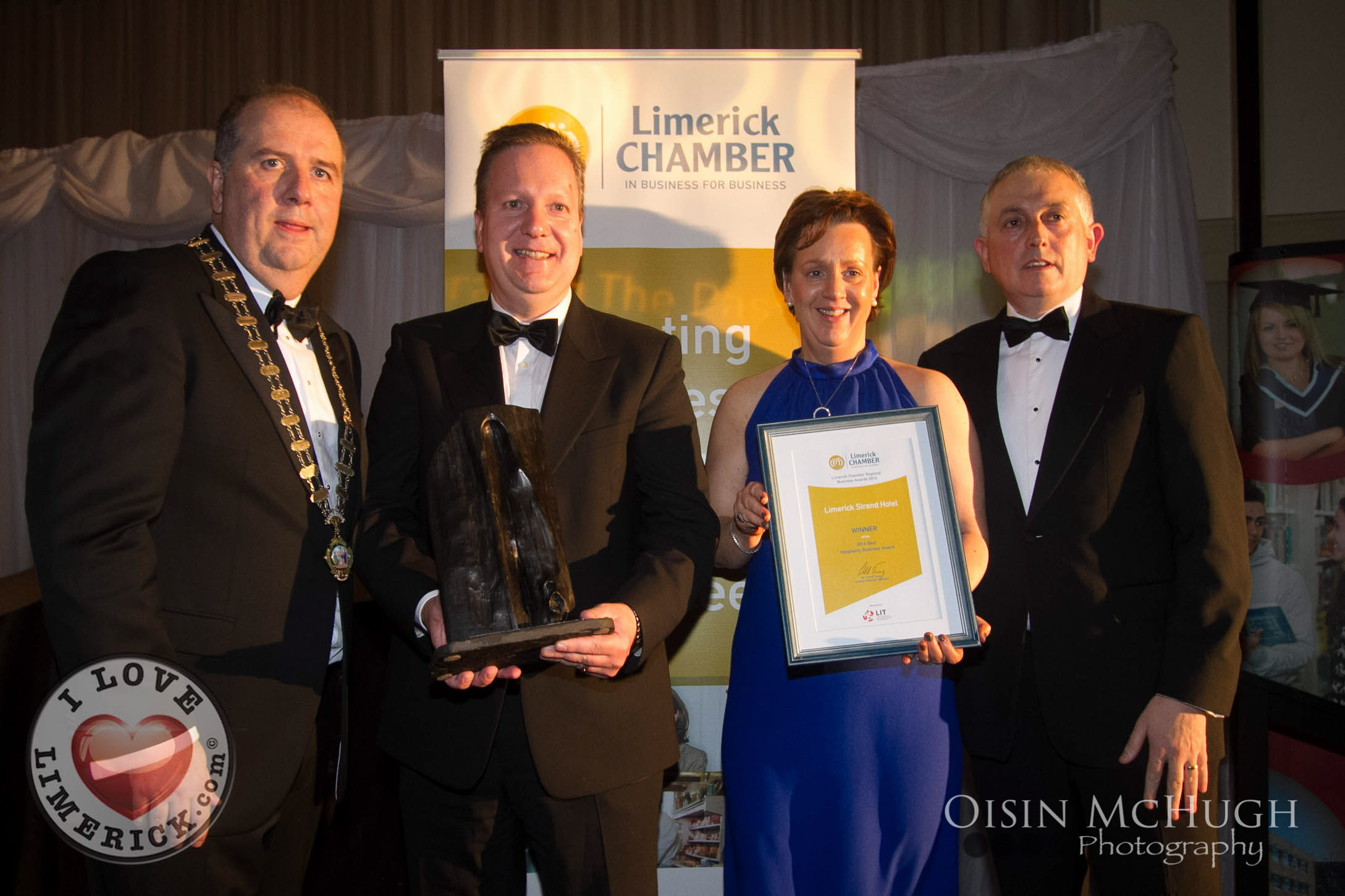 Over 400 of the region’s top business leaders and government officials attended the annual dinner and awards ceremony which featured a keynote address by Martin Shanahan, CEO, IDA Ireland.

Speaking at the awards ceremony, Limerick Chamber President, Cathal Treacy, congratulated all the winners as well as those who were shortlisted, commenting that “The competition was extremely high this year, so every company that made the shortlist should be proud of its achievements. This year’s winners are a great example of the vibrant business community and excellent talent in our region.”

Presenting the Overall 2014 Business of the Year award, he praised Grassland Agro for its innovative approach and continuous investment in its staff and services and noted that “Grassland Agro is a forward-looking company that has achieved significant growth through identifying agricultural and food services in need of investment, innovation and development. “

In addition to the 8 business awards contested on the evening, a special President’s award was presented by Cathal Treacy.

Des O’Malley was the recipient of the Limerick Chamber President’s Award. Mr O’Malley was honoured for his lasting legacy on the industrial landscape of our region. During his time as Minister for Industry and Commerce, he played a key role in bringing job-creating foreign investment into Limerick region.

The full list of the 2014 Limerick Chamber Regional Business Awards winners is as follows:

About the Awards: Now in its fourth year, the annual Limerick Chamber Regional Business Awards celebrate excellence in business across 7 categories. Attracting high profile industry support and involvement, the Awards offer businesses the opportunity to promote major achievements and celebrate success. Forward-looking and innovative organisations within Limerick Chamber membership and in the Midwest region are eligible to enter or nominate as many of the Award categories as they wish.

The following list outlines the specific award classification, the winning business and the reasons it was chosen for the honour:

START-UP/EMERGING – YELLOWSCHEDULE
Founded in 2013, this Limerick-based high potential start-up, has grown from two to 10 people. Providing software for the therapy market in the US, the firm secured an angel funding round of €600,000. With a strong board and key partnerships established, sales and projections for growth are promising.

SME – KEMP TECHNOLOGIES
Kemp Technologies established a base in Limerick in 2010 with 4 employees. It now employs 40 and has announced an additional 50 new jobs for Limerick this year. Customers include RTE, DELL, BT, Dyson, Microsoft, Liverpool Football Club and more well-known organisations. The company actively invests in their team, engages in R&D, enters new markets and uses local providers where they can.

LARGE – GRASSLAND AGRO
Grassland Agro was founded in 2002 by Liam Woulfe to invest and develop agricultural and food services businesses where there was a strong potential for growth. Four separate businesses make up the group which has a turnover of €185m. Each business, which is managed and financed as standalone, has enjoyed an increase in profit and employment numbers. Today the operation cumulatively employs 160 people, approximately 70 full time contractors and has over 30,000 Co-op, Merchant and Farmer customers on the island of Ireland.

CSR – DELL IRELAND
Dell Ireland actively supports the start-up community as well as the non-profit community. In 2014, Dell employees raised €68,875, which is over and above company donations through sponsorship or matched funding, and volunteered over 3,000 hours during the 2014 Daffodil Day campaign. Locally, Dell supported the ITLG Young Innovators, 32 non-profit organisations with its PM4Life programme, numerous schools through Junior Achievement and several charities like Enable Ireland, St Vincent de Paul and lots more.

SERVICES – HOME INSTEAD SENIOR CARE
Established in 2009, Home Instead Senior Care has grown by double digit figures year on year and grown 17% this year on 2013. Growing from two people to 218 caregivers and 9 permanent support staff, the business continues to innovate and remodel to meet changing demands while providing care to nearly 400 clients at home and placing a strong focus on education.

RETAIL & HOSPITALITY – JOINT WINNERS
RETAIL – MICHAEL GLEESON SHOES
The longest established footwear retailer in Limerick, Michael Gleeson Shoes Ltd, has come through the recession innovatively while building it business portfolio. Trading profitably for over forty years, the company continually moulds its products and service offerings in line with rapidly changing customers’ needs.
& HOSPITALITY – LIMERICK STRAND HOTEL
Operating in a fiercely competitive industry, the Limerick Strand Hotel has enjoyed 20% growth, created a number of new positions, invested in existing staff and reduced costs through environmental policies. Active promoters of the region as a tourism destination through partnerships, the hotel is developing a Food Tourism initiative for the city and area.

SPORT, ART & CULTURE – LIME TREE THEATRE
Opening its doors in 2012 amidst challenging economic times, the Lime Tree Theatre has sold 80,000 tickets, generating a turnover of over €1.2m and is now firmly on the circuit for national and international touring companies. With just four employees, the theatre is the first new venue to be taken on as a client of the Arts Council in nearly five years.

OVERALL WINNER – GRASSLAND AGRO
Grassland Agro was founded in 2002 by Liam Woulfe to invest and develop agricultural and food services businesses where there was a strong potential for growth. Four separate businesses make up the group which has a turnover of €185m. Each business, which is managed and financed as standalone, has enjoyed an increase in profit and employment numbers. Today the operation cumulatively employs 160 people, approximately 70 full time contractors and has over 30,000 Co-op, Merchant and Farmer customers on the island of Ireland.