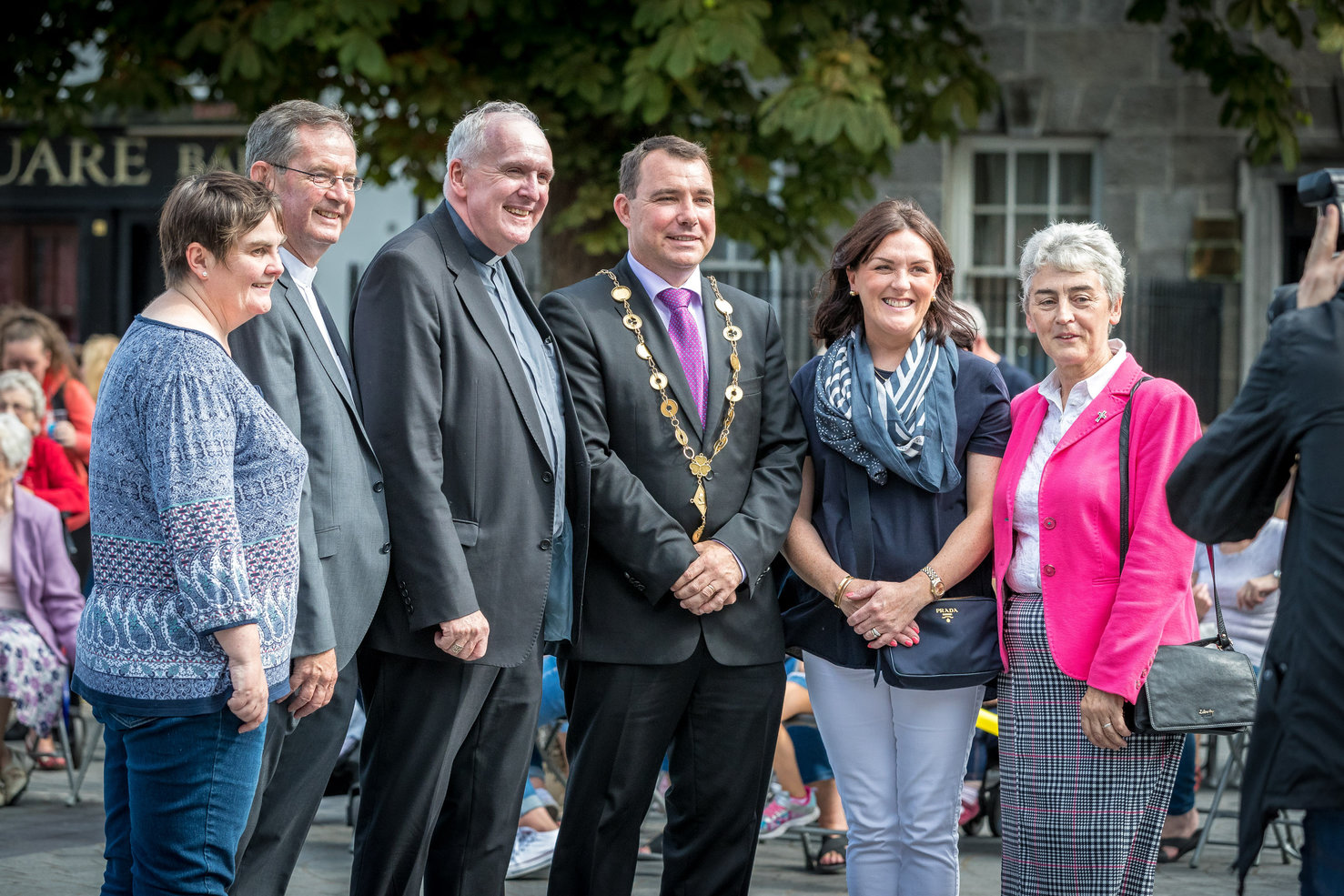 Bishop of Limerick Brendan Leahy has expressed his deepest gratitude to the people of Limerick for the hugely encouraging ‘send-off’ he and the diocesan delegates to the World Meeting of Families received at the official celebration which was the Limerick Diocese Street Party.

Large crowds, young and old, attended a three hour long Limerick Diocese Street Party on John’s Square from 3:30 p.m., with some 700 people then gathering in St. John’s Cathedral for what Bishop Leahy described as a “deeply meaningful and spiritual” ecumenical prayer service.  The events were held in the diocese to mark the commencement of the global event in Dublin and arrival at the weekend of Pope Francis.

Said Bishop Leahy:  “We are on the cusp of something very exciting for the Church here in Ireland with the visit of Pope Francis at the weekend and the World Meeting of Families already kicked off.  The build-up has been a very trying time for many, particularly victims of abuse by clergy and religious, as a lot of dreadful experiences have been recalled over the past few weeks.

“It has been challenging for all Catholics in Ireland to understand how this could have happened so these weeks have been really difficult and understandably so.  Yet yesterday afternoon at our Street Party and last evening at our prayer service in St. John’s there was a real sense of joy at what lies ahead.  But there was also very much an acknowledgment that this is a hugely important moment for the Church in Ireland when we look back and atone for the sins of the past, bring the great good also with us that has been done and turn the Church in Ireland to a better future.

“It’s not a case that all those who gathered, and thousands of others did likewise across other dioceses this evening for their ceremonies, have just decided to leave all the negative behind. Rather, there is a real commitment to work together to make sure that it doesn’t happen again and determined to make the best of the opportunity that this great crossroads in our Church in Ireland is.”

Continuing, he said:  “I was really delighted with the numbers in attendance.  Coming after the magnificent Limerick homecoming the day before, it took a lot for people to get out again but they did.  Just like a week ago with the hurling, some were even also looking for tickets for the Festival of Families in Croke Park on Saturday.

“Personally I was humbled by all the well wishes.  Many people simply came to wish me and others participating from the diocese in events over the coming days well and I found that hugely encouraging.  People just wanted to give us a positive end off.  It’s very much appreciated and I want to say a huge thank you to them.  We all need encouragement, not least at this time in our Church’s history.”

The Street Party – officially opened by Sr. Helen Culhane, founder of the Children’s Grief Centre in Limerick, and her recently appointed ambassador Olive Foley, wife of the late Munster and Ireland rugby legend Anthony Foley – saw young and old enjoy a host of activities, from face painting to street entertainment and food stalls.

The ecumenical prayer service in St. John’s was led by Bishop Leahy and Church of Ireland Bishop of Limerick and Killaloe Kenneth Kearon. Also in attendance were Rev Ruth Watt from the Methodist Church, Adare, Dean of St. Mary’s Cathedral Niall Sloane and Canon Patrick Comerford, Church of Ireland, Rathkeale.

Mayor of the City and County of Limerick James Collins was also in attendance, as well as a host of other civic representatives.

The service included prayers in different languages representing Limerick’s fusion of cultures and ethnicities, while the ‘Hands In Harmony Deaf Community Choir’ were also involved, as were various other choirs and youth groups from Kilfinane and Rathkeale.  Among those leading the prayers were couples who will represent the diocese at Saturday’s special Pro Cathedral ceremony celebrating the family that will be attended by Pope Francis.