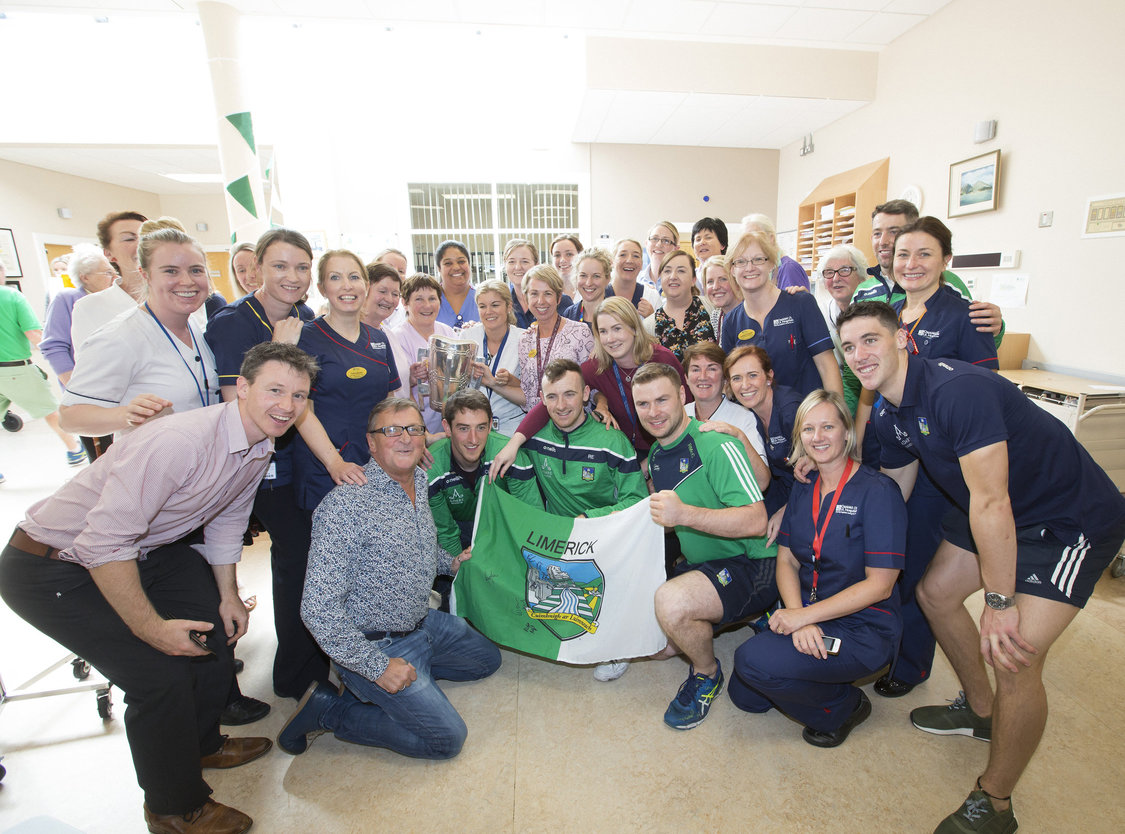 Patients, visitors and staff were delighted this Tuesday to welcome the victorious Limerick senior hurlers to UHL as a UHL All Ireland Champions visit was planned to raise the spirits of patients at the hospital. 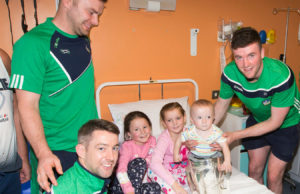 There were scenes of joy as the players met patients and their families in the Children’s Ark and in the Day Ward at the Midwestern Cancer Centre.

“We would like to thank this wonderful, talented Limerick team for the UHL All Ireland Champions visit today and for raising spirits. There has been huge excitement around the hospital in recent weeks and last Sunday’s performance has topped it all. We would like to thank Limerick GAA, the team management and sponsors and especially the players for taking the time out from their busy schedule to visit us. They have always been great supporters of the hospital and its staff and their visits always mean so much to our patients,” said Prof Colette Cowan, CEO, UL Hospitals Group, and native of Joe Canning’s Portumna, County Galway.

“Only last September, we were delighted to welcome the victorious Limerick U-21 team to the Children’s Ark, among them Tom Morrissey, Kyle Hayes, Aaron Gillane, Peter Casey and Andrew La Touche Cosgrave. Little did we think that they would be All-Ireland senior medal winners within a year and that Liam McCarthy would be making a visit to the wards so soon afterwards. Limerick can take great pride in this group of sportsmen who have proven so generous with their time and who have been so good to patients of all ages. They are true ambassadors for their sport and their county,” Prof Cowan added.

Staff in the hospital are especially proud that among the All-Ireland winners is their colleague Darragh O’Donovan, Medical Records, and Seamus Flanagan, who did his clinical placement in the Department of Radiology at UHL.

Neither the Children’s Ark nor the Cancer Centre were built the last time a victorious Limerick team brought the Liam McCarthy Cup to the then Regional Hospital in 1973, explained Prof Declan Lyons, Consultant in Elderly Medicine, who has written on the history of hospital and healthcare in Limerick and the region.

“A visit and a tour to the Regional Hospital in 1973 by the victorious Limerick hurling team would have been a brief affair covering a surgical and a medical block. It is barely possible to walk all of the corridors in a day in 2018,” said Prof Lyons.

“When Eamonn Grimes last lifted the McCarthy Cup, the Regional Hospital Limerick was just emerging as the flagship hospital for the region. It had at that time a mere three physicians and six surgeons with three obstetricians/gynaecologists and two paediatricians on the consultant staff.  Barrington’s Hospital was operating fully as an acute hospital as was St John’s Hospital. St Camillus’ Hospital was just about transitioning from its role as a union “hospital” and St Josephs continued to provide all of the inpatient psychiatric services for the region. Croom Hospital was continuing to provide medical services as well as specialist orthopaedic services at that stage.

“Specialised services for children were extremely limited at that time and the construction of the paediatric facilities at the Children’s Ark were not even being considered, let alone the establishment of country’s first medical school since the foundation of the state. Now the school has its clinical teaching years predominately based at the now University Hospital Limerick with hundreds of consultants and all medical specialities now catered for within the vastly expanded Dooradoyle site,” Prof Lyons added.