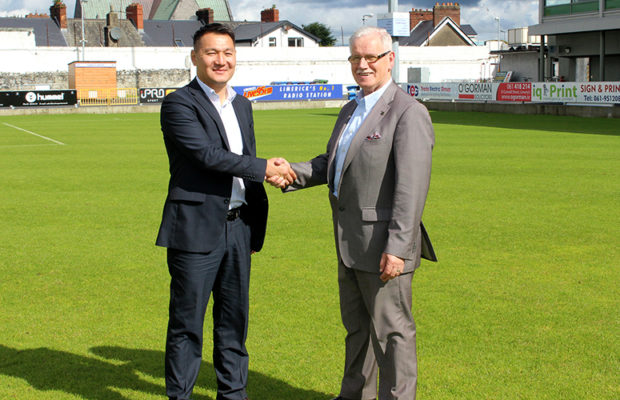 Limerick FC has announced an innovative community partnership with the Mongolian Football Federation which they say will be beneficial for both sides.

Sixteen-year-old central defender Belgutei Batjargul, who has spent time at the academies of Arsenal and Chelsea is the first player to come to Limerick as part of a planned player exchange programme. He will spend some time training at Limerick’s Bruff Academy.

After year-long discussions, Mongolian Football Federation Manager Enkhjin Batsumber arrived in Limerick this week as the deal was formally agreed. Batsumber and his colleagues had spent time in the UK last year searching for a potential partner with strong community links.

However, Limerick’s community work impressed the Mongolian Football Federation so much that the pair has now linked up. The partnership will see players, coaches and community staff travel from Mongolia to Ireland and vice-versa, with the potential for Mongolian National Team squads to come and train and stay in Limerick.

Limerick FC Chairman Pat O’Sullivan explained: “Football is the fastest-growing sport in Mongolia, and they would like to address a lot of issues through sport – that was their concept, which is really a lot like what we do.”

“The idea is that the Mongolian Football Federation will send people here to look at our community programmes, some will come over to develop coaching techniques and they will also send some young players to train in our Academy.”

O’Sullivan added: “They would like to experience our football culture with the idea that some National Team squads would come to Limerick and base themselves here for a couple of weeks as part of their training and development.”

On the partnership, Mongolian Football Federation Manager Enkhjin Batsumber said: “What Mr O’Sullivan is doing in Limerick is an ideal model of what we are trying to achieve in Mongolia; bringing football into the community from grassroots level all the way to the top by focusing on and developing young players.”

“We want to incorporate football as a social tool to guide youth to a better path and keep them out of trouble. Football is the fastest-growing sport in Mongolia. Mongolians, in general, are very athletic people despite our small population we’ve won gold medals in very tough sports like judo and boxing.”

He added: “This is an amazing opportunity. I can’t thank Limerick FC and Mr O’Sullivan enough. We are really looking forward to building this relationship and making it long-term.”

Belgutei Batjargul also known as Billy has attended the academies of Arsenal and Chelsea as well as the Bobby Charlton Soccer & Sports Academy, and he will now spend time training in Limerick’s Academy.

Batsumber said: “Billy is a young player who wants to develop his football skills. It will be a great experience for his future, not only because of football but learning the western culture and interacting with different people and young players here.”

“He can become a proper player, get a proper education and gain invaluable experience at a very important age as he moves towards adulthood,” he said.