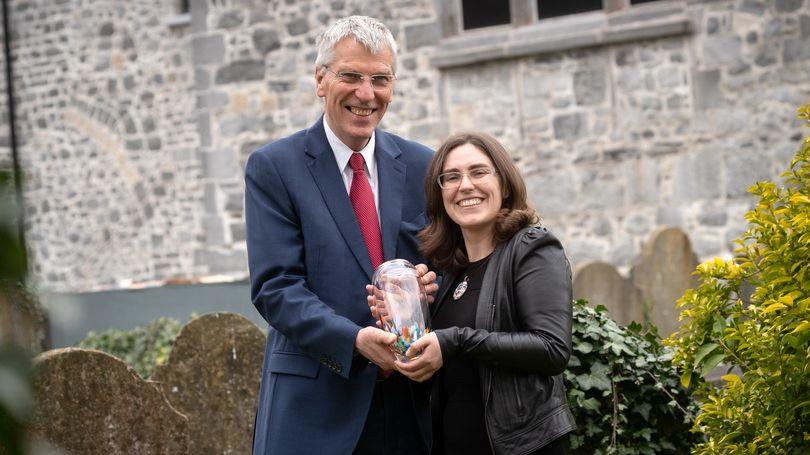 Sharon with Richard Lynch of I Love Limerick and former Mayor of the Metropolitan District of Limerick Sean Lynch at her Mayoral Reception. Picture: Dolf Patin/ilovelimerick

Limerick historian Sharon Slater is an award-winning historian who has received the National Heritage Hero Award in 2017 and a Mayoral reception in 2018. She is currently the Historian in Residence at Ormston House. Her website, Limerick’s Life, contains a compilation of historical articles, letters, as well as old and new photographs and maps that aim to tell the story of people who have lived and died in Limerick throughout the years.

Is history something that you’ve always been interested in?

I have always been curious (some might say nosy), so I would question what buildings were and why they were significant. In saying that, I did not enjoy history in school. There was too much emphasis placed on wars, royalty, and regurgitating dates. To me, history is the story of our past, not a dry data set.

Who encouraged your interest in history?

Mentors are very important. I moved into Limerick city as a teenager and had the privilege of meeting the late Frank Prendergast soon afterward. He encouraged my interest in history and would take me along to history events and introduced me to many people. There are people working in the Limerick council who don’t get enough credit for putting their archives online, Mike Maguire in the Limerick Library, Brian Hodkinson and Dr. Matthew Potter in the Limerick Museum, and Jacqui Hayes in Limerick Archives. As the saying goes I am “standing on the shoulders of giants.”

Why do you think it’s important that we preserve history?

I think people tend to forget sometimes that we are the history of the future. Our actions today are going to be dissected by historians in 100 years to come. It is important for us to pass on the memories of the past to the future generations so they can learn from them, the same as how we have learned from the generations that came before us. Those before us were human too and the stories of their lives are just as important as the major events that shaped society.

Where did the idea to set up Limerick’s Life come from?

In the early 2000s, while studying for my MA in Local History in UL, I realised that I started to amass a collection of interesting stories that had no place in my thesis. As they seemed so interesting to me I thought others might feel the same. I’m a great believer in sharing our history. So I registered the domain name and used it as a platform to host the information I was uncovering.

Can you tell us a little about the site?

It was founded in 2004, which is unbelievably almost eighteen years ago! If it was a person it would nearly be an adult. From the time of its inception to today, Limerick’s Life has grown into almost a thousand pages. Each of those was built with curiosity and passion. The main categories can be broken down into people, place, and chronicles. There are pages on famous and regular people from the city and county, stories of streets and buildings, and lists of interesting facts like Dr. Crumpe’s 1795 weather report. Limerick’s Life is also on Twitter, Facebook, and Instagram where snippets of history are shared.

Looking for something to do this holiday season, the Women of Limerick app is still available to download for free https://t.co/ZaPsdb43O0

What has been the highlight of running Limerick’s Life?

It has definitely been making new discoveries in Limerick’s history. One story comes to mind, In October 2013, photographs from the 1940s belonging to a Pan American pilot were found in Limerick. The box contained images of children. That year, I created a post on the site and tried to discover who they were but with no luck. That was until four years later when I was contacted by a woman in America who was the daughter of one of the children pictured. The children were descendants of the famous Daly family in Limerick who had moved to America when they were small.

What would you say your greatest achievement is so far?

When it comes to my work, I would say receiving the National Heritage Hero award and the Limerick Mayoral Reception. The vast majority of my work on Limerick history is voluntary, so receiving those awards was wonderful. They made me fully realise how much others were enjoying what I have been doing these last almost twenty years and that it hasn’t been in vain.

Do you have any advice for someone who wants to delve into historical research?

Be curious, ask questions and double-check everything where you can. Join societies on the topic you are interested in, people, in general, are also very helpful. Also, remember to keep notes of all your references so you can go back and check on them.

Over the last few months, I have been working on a new book, 100 Women of Limerick, for Ormston House, which is due for release in March 2022. This book tells the story of 100 women of note who had a connection to Limerick city and county. This Idea came on the back of the Women of Limerick app, which won an award from National Heritage Week in 2021.

Mostly, I love the people. Limerick people have a dear love for their home even after they leave it. They are in general very giving with their knowledge too. Often, I am stopped on the street by people curious about some aspect of history or with an interesting fact to share. I welcome these interactions, they make every day in Limerick unique.