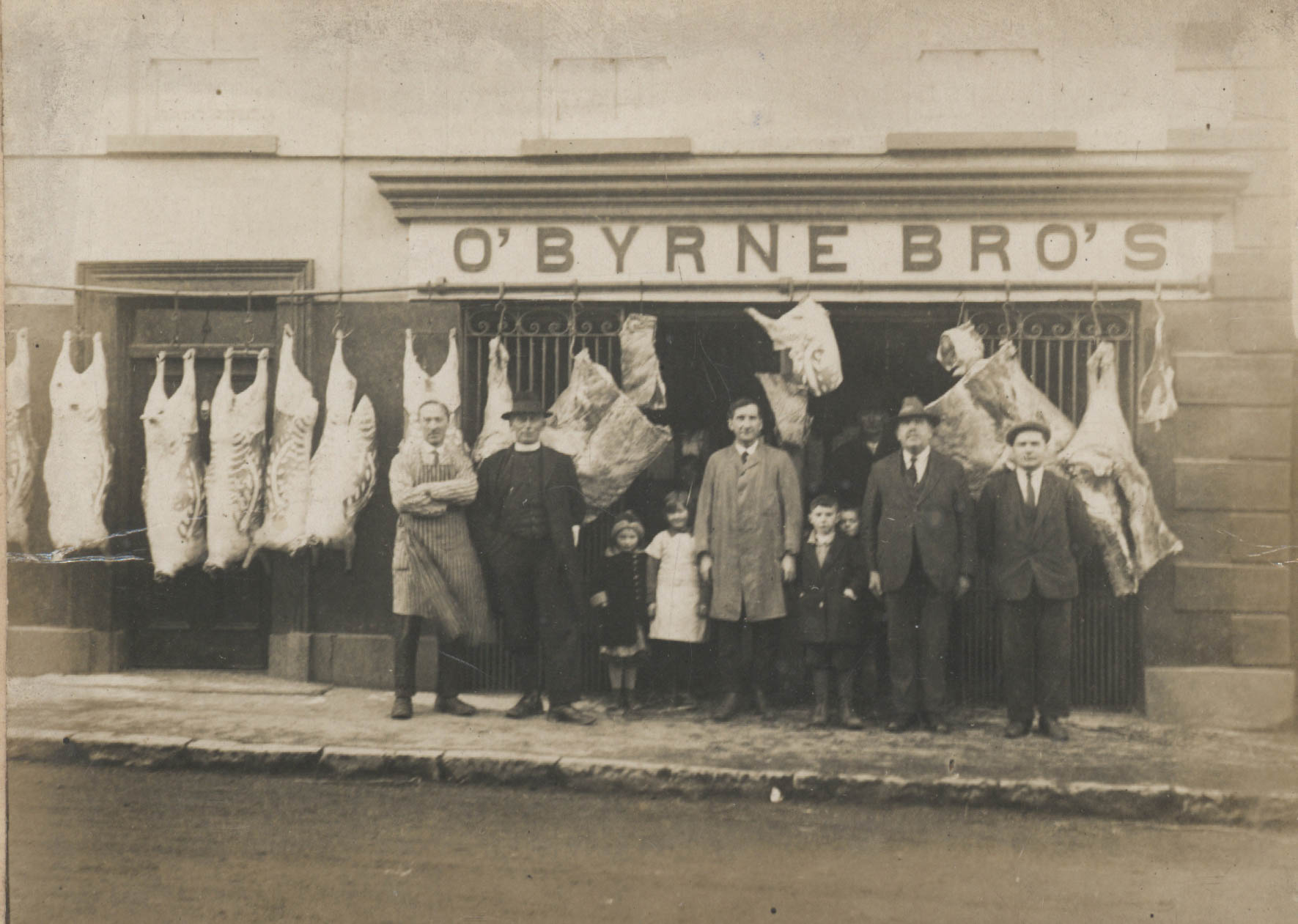 Pictured: OByrne Brothers, in 1920. Courtesy of the Limerick Museum.

Limerick’s lengthy association with the bacon industry, which was a key employer in the city for more than 150 years, is the subject of a new heritage project projected announced yesterday by Limerick Museum and Archives, in partnership with Mary Immaculate College.

The public are being invited to an Open Night at Limerick City and County Council’s Corporate Headquarters in Merchants Quay on December 3rd to share their memories of and connections with the bacon factories as part of the project team’s social research on the impact of the industry on the city and county.

Such was the fame of Limerick ham and bacon that English bacon curers recruited Limerick butchers and Limerick ham was sold at a premium internationally. Limerick bacon curers also invested in the latest techniques and in the late nineteenth century were among the first to use ice, which allowed curing to continue in the summer months. By the 1890s, Shaws was using electricity for its cooling rooms and had its own lifts and telephones, which then were state-of-the-art technologies.

Speaking ahead of the forthcoming Open Night and about the project, lead researcher Ruth Guiry said: “The bacon industry linked city and county in the production of pigs and bacon.  In these stories we get closer to the true character of Limerick with stories of nicknames, families and humour in a time when people counted themselves lucky to have a job.”

“The Bacon factories were very much local communities and many of the employees were related,” said Ms. Guiry. “The work could be hard and unpleasant. Workers wore wooden platform shoes to work in the blood and gore of the Bacon Factories floors. There were permanent workers employed in the factories such as the Pork Butchers while casual workers become known as ‘Yanks’. The Pork Butchers had a saying ‘nothing was wasted of the pig except the squeal’. The pigs by-products were used in the production of sausages and puddings, while even pigs bladders were used for footballs. Women were also employed in the industry and in Matterson’s women made sausages.”

“It was a common sight to see pigs being driven through the streets of Limerick en route to O’Mara’s or Matterson’s. Many of the pig buyers lived in Athlunkard Street, the real heart of Pigtown. Our hope is that the Open Night will offer an opportunity to former workers to meet and share their memories. We are keen to capture the heritage of this industry which tells us so much about the history of Limerick as a hive of industrial activity,” added Ms. Guiry.

“The bacon industry is part of the fabric of Limerick as the pigs were delivered and killed in the centre of the city,” said Jacqui Hayes, Limerick Archivist.

She continued, “Limerick’s bacon factories were critical to the city’s economy by the turn of the century and were Limerick’s biggest employer. Shaws success was phenomenal at this time as it rose from modest circumstances to become the second largest bacon curer in the world. The factories also provided cheap food for the city’s populace for many decades and pigs heads and crubeens were essential to the Limerick diet. Many Limerick people kept pigs in their back yards.”

“Clover Meats closed in 1978 after a series of strikes while O Mara’s closed in 1988 as part of a national rationalization of the Irish bacon industry. With it ended not just one of the city’s major industries but also a way of life that helped to forge the city’s identity,” concluded Ms. Hayes.

The Open Night will be held at City Hall, Merchants Quay, Limerick, on Thursday, December 3rd at 7.00pm. For further information contact Limerick Museum and Archives on 061-407293.

Limerick on Ice returns for 2015