By Richard Lynch on January 1, 2014@richanthon 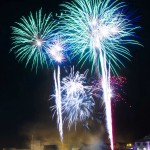 LIMERICK city welcomed in 2014 in style to mark its designation as national City of Culture. Cranberries star, Dolores O’Riordan, headlined a major concert at Merchant’s Quay in the shadow of St Mary’s Cathedral as part of the celebrations. Earlier at 8.14pm on New Year’s Eve the skies above the river Shannon were lit up by a spectacular fireworks display. There was also a colourful pageant, which saw city centre streets illuminated with hundreds of Chinese lanterns, glowing floats, and fairy lights.

To see what other events are happening in Limerick, click HERE.

Photos by Jonathan Baynes for www.ILoveLimerick.com 2014.

Photos by David Woodland for www.ILoveLimerick.com 2014.